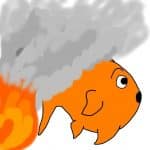 A goldfish has been found alive and well after two years in a covered pond with no fresh water, food or light!

The goldfish, named Smokey, was thought to have died when a fire destroyed four homes in 2011. The house and pond were abandoned and it was only in September 2013, when builders were preparing to rebuild the homes, that the goldfish was found alive.

The pond had been covered with a plastic sheet, which meant that the fish was without light or food (aside from any insects that may have been found in the water) for the entire time. The pond had not been refilled with fresh water and was just a few inches deep by the time the fish was discovered.