You are here: Home / Archives for Goldfish Types / Pompom 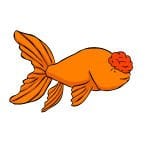 The pompom goldfish is actually correctly named the “pompon”. However, due to its appearance, it is much more commonly known by the name pompom. The pompom goldfish is distinctive due to the two bubble-like growths than develop on the nose of the fish from the time that they are around 18 weeks old, making the fish […]