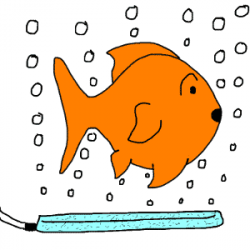 As you may already be aware from browsing our other articles, goldfish definitely need a filter in order to keep their water parameters under control. But what about an air pump?

Do goldfish need an air pump in their tank? Will there be enough oxygen in the water if you don’t add an air pump? Read on to find out…

What is an air pump?

We’re sure that many of you are fully aware of what an air pump is. However, there is some confusion among beginners, who often confuse an air pump with a filter.

A filter is a piece of equipment that draws water through filter media (such as sponges), in order to remove debris from the water. The filter also becomes home to good bacteria, which help to remove dangerous chemicals from the water.

An air pump does not filter the water. It simply blows bubbles into the water.

The air pump itself will sit outside your tank. A piece of tubing will then run from the air pump, into your tank water and connect to something called an air stone.

The air pump sends air along the tube and out of the tiny holes in the air stone. As the air stone is submerged in your tank water, this flow of air creates a stream of bubbles.

Do goldfish need an air pump?

New goldfish keepers often see air pumps in goldfish tanks and assume that they are strictly required and that the fish will suffocate without one. However, it’s not quite that simple.

You may be surprised to hear that all of those bubbles from the air pump don’t actually add much oxygen to the water at all. It is actually disturbance at the surface that really helps to dissolve oxygen into the water. And an air pump is not the only way to create that disturbance.

In most cases, enough disturbance will be caused by the flow from your filter to get plenty of oxygen into your water. This oxygen will allow your fish to breathe just fine.

In these cases, whether or not to add an air pump to your goldfish tank is purely an aesthetic consideration. It won’t do any harm if you do choose to add one – and your certainly won’t end up with too much oxygen in your water – but it won’t really add anything other than making your tank look nice.

Are there times when an air pump really is needed?

The answer is yes. If any of the following are true then you should add an air pump to make absolutely sure that your fish has enough oxygen:

1) Your water appears very still and your filter isn’t causing much surface movement (you may also want to check  that your filter is big enough for your tank!)

If this sounds like your goldfish tank then we suggest you buy an air pump as soon as possible.

How to tell if your fish is struggling to breathe

If you have a filter causing lots of disturbance on the surface of the water – and possibly an air pump causing even more disturbance – then your fish should never have any problems breathing.

But, just in case, how do you recognise that your fish does not have enough oxygen? Here are the symptoms you should look out for:

7 thoughts on “Do goldfish need an air pump?”