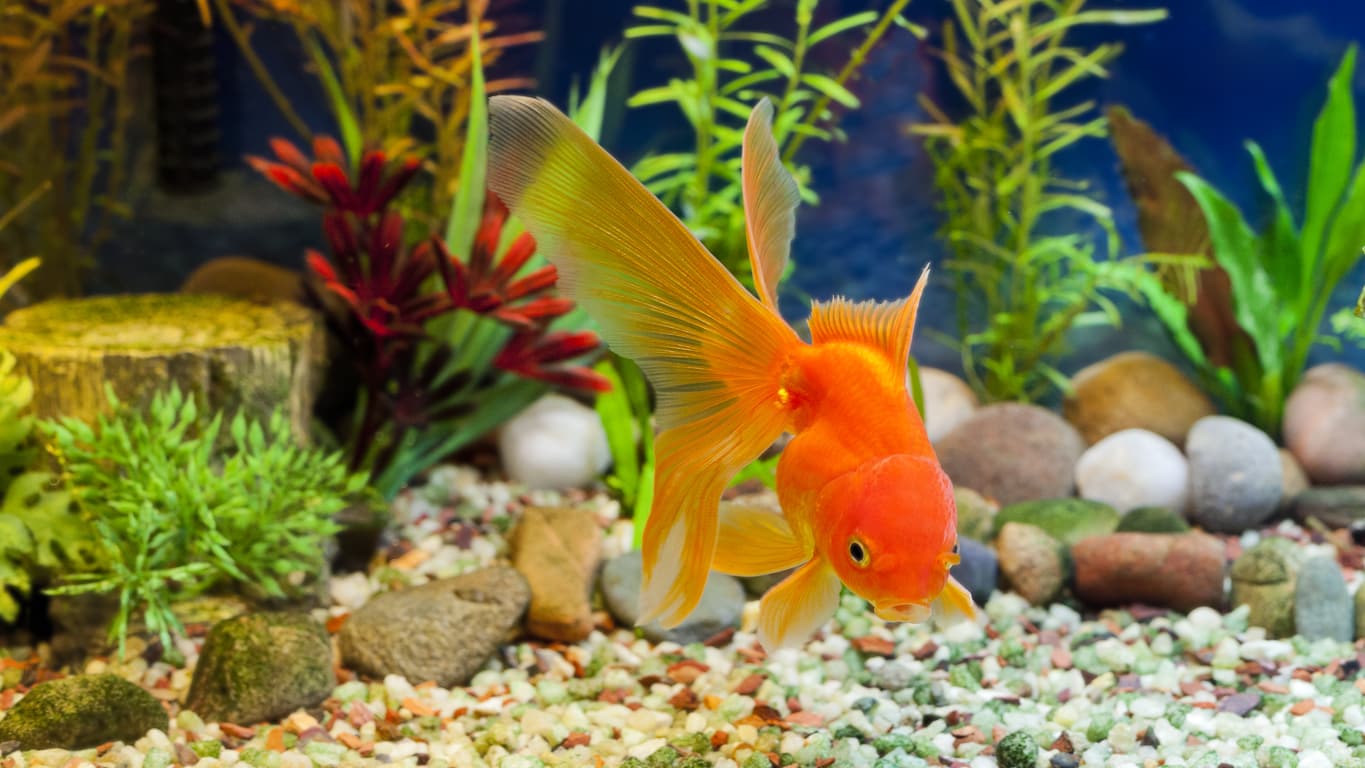 If you’re new to keeping goldfish or want to refresh your knowledge, you’ve come to the right place! In this introduction to goldfish care, we give you the best and most up-to-date advice on how to care for goldfish and help them live a long time.

Our guide to goldfish care is constantly kept up-to-date and covers:

The aim of this introduction to goldfish care is to give beginners the basic knowledge they need to care for goldfish properly. Of course, there’s much more to learn about goldfish, so throughout this care guide you’ll find links to other articles that explore these topics in more detail.

The Goldfish Tank has been offering expert goldfish care advice since 2013 and is written, updated and maintained by a knowledgeable team of aquarists. If you need more help or you’re unsure about anything in this guide, please get in touch or add a comment below.

What size tank do goldfish need?

The most important part of proper goldfish care is making sure your goldfish have a big enough tank to live in. The biggest mistake that new goldfish-keepers make is buying a very small tank or goldfish bowl.

It may surprise you to learn than goldfish can grow to be several inches long, so they need a lot of space to swim around.

Fail to give your goldfish enough space and their growth will be stunted, their water will become polluted by their own waste, and they almost certainly won’t live very long.

If you currently have a goldfish in a bowl, you need to get them a bigger tank as soon as possible.

How big a tank do goldfish need? It depends on the type of goldfish and how many fish you have. These are our minimum goldfish tank size recommendations:

Add an extra 12 gallons (45 litres) for each additional goldfish

By ‘slim-bodied goldfish’ we mean Common Goldfish, Comets and Shubunkins.

Not sure what variety of goldfish you have? Find out more in our guide to types of goldfish.

We’ve talked about the most important piece of goldfish equipment – your tank – but there are a few other items that you’ll need to care for goldfish properly. Browse important pieces of equipment below or check out our list of essential goldfish-keeping kit.

To keep your tank water clean

Do goldfish need a filter?

To add oxygen to your water

Do goldfish need an air pump?

To control the light level

For decoration & to give your fish somewhere to hide and explore

Like plants, to look good and for your fish to hide and explore

To maintain a clean tank and perform water changes

How to do water changes

To remove or neutralise harmful chemicals in the water

Looking after your goldfish water is “the science bit” of goldfish care and it can seem intimidating at first, but it’s really not too complicated. We’ll keep this simple and you can click through to more detailed articles if you’d like to learn more.

When setting up your tank, you need to know about something called “cycling”. And it’s nothing to do with riding a bike! It’s all about moving through the nitrogen cycle.

The nitrogen cycle is a process that turns chemicals that are harmful to your goldfish into less harmful chemicals. So it’s a good thing for your fish!

There are three chemicals you need to know about:

Ammonia comes from your fish’s poop and other waste, such as rotting food or plants. If left unchecked in your tank, ammonia will burn your fish’s gills and fins and cause serious damage. A goldfish in a tank with lots of ammonia will not last long.

Fortunately, “good bacteria” in your water can turn ammonia into a less harmful chemical, called nitrite. Unfortunately, nitrite is still not good for your fish, so there’s one more step in the process.

That helpful good bacteria takes the nitrite and turns it into nitrate. Now, nitrate still isn’t good for your fish – so you don’t want high nitrate levels – but it’s a lot less harmful than ammonia and nitrite.

Cycling is therefore the process of building up bacteria that will turn ammonia into nitrite, and nitrite into nitrate.

To avoid harming any fish during the cycling process, you would ideally cycle your tank without fish inside. You simply need to add ammonia from a bottle to get the process started and then wait. There are also products you can buy to help speed the process along.

But wait! How do you know how much ammonia, nitrite and nitrate is in your water? Is your water ready for your fish yet? Is your current fish living in a tank with dangerously high ammonia levels? The answer is to test your water using a test kit

Test kits involve taking a sample of water and adding a chemical that changes its color. You then compare the color to a chart to find the level of ammonia, nitrite or nitrate. Some test kits use strips that you dip in the water and they change color instead, but the principle is the same.

Even once your tank is cycled, waste and dangerous chemicals will build up over time. To keep your fish’s water fresh, you need a regular routine of water changes.

We recommend changing around one third of your goldfish’s water each week.

How to do water changes

We’ve talked about the chemicals in your water, but what else should a goldfish-keeper think about? There are a few more water parameters that you could consider – including pH, hardness and oxygen levels – however these tend to be ok in most tanks and goldfish are tolerant of a wide range of these parameters, so we don’t recommend worrying about them too much if you are a beginner.

There is however one other factor that you should keep a close eye on – temperature.

Goldfish like a stable water temperature within a comfortable range.

Managing the type and amount of food that your goldfish eats is one of the most important parts of goldfish care. Below, we look at the different types of goldfish food are available. Then, we explain how often to feed your goldfish and how much food to give them.

Flakes are probably the most common type of goldfish food. However, a problem with flakes is how fast they disintegrate and pollute your fish’s water.

Goldfish may swallow air when eating flakes off the surface of the water, which can cause digestion problems.

Pellets are very easy to store and make it easy to measure the amount you’re feeding your goldfish. Another advantage of floating pellets is that any leftovers are easy to find and remove before they rot.

Live foods offer a great source of protein for your goldfish. The process of catching and eating them is also closer to what your goldfish would do in the wild.

However, by purchasing live creatures from a pet store, you risk introducing disease and infections to your tank.

Freeze dried foods are essentially live foods (like brine shrimp) that have been frozen and had the moisture removed. This means that freeze dried goldfish foods offer lots of protein, but without the risk of disease.

We recommend including freeze dried food in any balanced goldfish diet.

You don’t just have to feed fish food to your goldfish. Goldfish can eat “human food” too, including vegetables.

One of the best choices of vegetable for goldfish is peas with the shells removed. Simply boil the peas, remove the shells, then slightly mush the inside of the peas so they are small enough for your fish to eat. Peas are really great at preventing constipation in goldfish.

What should you feed your goldfish?

There are lots of different types of food goldfish can eat, but it’s not a case of choosing the “best” one. A good goldfish diet is varied, so you should choose a combination of different foods.

We recommend feeding your goldfish a healthy mix of flakes, pellets, live or freeze-dried food and vegetables. This will give them all the nutrients they need to stay healthy.

How much should you feed goldfish?

You need to be very careful not to over-feed your goldfish. Many health issues – such as constipation – can arise from giving your goldfish too much food.

So how much food should you feed to a goldfish?

Here are two common recommendations for helping you to judge the right amount of goldfish food:

If that doesn’t sound like much, well… that’s the point! Feeding your goldfish too little is almost never a problem. Whereas over-feeding can be life-threatening.

How often should you feed goldfish?

Until they are one year old, we suggest feeding your goldfish very small amounts of food 2 or 3 times per day. Once they are older than a year, you should feed goldfish just once per day.

Hopefully this introduction to goldfish care has helped you grasp the basics of what you need to be a good goldfish-keeper, but there’s lots more to learn!

We recommend exploring the links above to learn about the topics we’ve covered in more detail. It would also be a good idea to learn about goldfish diseases. Even if your fish is healthy now, knowing about the ways that goldfish can get sick can help you spot early warning signs and be prepared to treat your goldfish properly.

12 thoughts on “Goldfish Care: An Introduction to Caring for Goldfish”