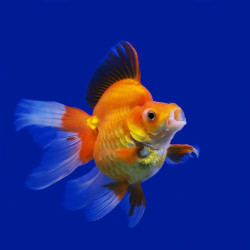 Most people worry that they won’t feed their goldfish enough, but that’s almost never a problem. Goldfish can live for around 14 days without being fed, and potentially much longer if there are food sources like algae to snack on.

When deciding how often to feed a goldfish, the problem you want to avoid is actually over-feeding. Feeding a goldfish too much food can lead to all kinds of life-threatening health problems!

We’ll talk more about over-feeding later in this article, but first, we want to share our rule for how often to feed goldfish:

There are, however, a number of factors that could lead you to adjust this schedule. Also, the type and amount of goldfish food you feed your goldfish is important.

In the vast majority of cases, we recommend following our advice to feed adult goldfish once per day. However, there are a few reasons you might want to adjust this:

Let’s look at each of these in turn.

How often to feed goldfish at different ages

As we’ve already mentioned, we recommend feeding younger goldfish (by that, we mean fish that are less than one year old), more often than adult goldfish.

Rather than once per day, we recommend feeding young goldfish at least two, possibly three times per day.

This is because more frequent meals will promote healthy growth.

It’s important to only feed very small amounts though. A small pinch of food is enough.

You might not have guessed it, but the temperature of the water has a big impact when deciding how often to feed goldfish.

In colder water, a goldfish’s metabolism slows down. This means they don’t need as much food and will find it harder to digest the food they do eat.

Goldfish kept in outdoor ponds – where there will be algae and bugs to snack on! – may need to be fed as little as once per month.

How breeding affects when you feed goldfish

You may choose to feed your goldfish more often if you are trying to condition the fish for spawning.

The increased food will also increase the egg and milt count.

How often to feed goldfish if your tank is crowded

When your tank is crowded, your fish will produce more waste. This risks polluting your tank water, so you should take extra care not to over-feed.

Having multiple fish in the same tank also means that your fish will compete for food. You’ll need to pay close attention when feeding to make sure every fish gets enough food (and no fish eats too much!)

Both of these factors mean that – if your tank is crowded – you may want to feed smaller, slightly more frequent amounts.

By keeping the amounts small, you lower the risk of polluting your water. And by feeding more regularly, you may be better able to target each fish and ensure they all get their fair share.

Fitting goldfish feeding into your own routine

Finally, as much as your goldfish’s diet should be based around their needs, you also need to take your own routine into account.

For instance, there’s no point planning to feed your fish three times per day if you’re out at work or school all day so won’t be there to feed them!

We think it’s better to get into a regular routine, which your fish will get used to, rather than feeding once per day on some days, and multiple times per day on others.

So, before deciding how often to feed goldfish based on our rules or anything else you may read, think about your schedule and make a choice that works for you.

How much to feed goldfish

We’ve talked about how often to feed goldfish, but what about how much to feed goldfish? As we’ve already said, you need to be very careful not to over-feed your goldfish as many health issues can arise from giving them too much food.

So how much food should you feed to a goldfish?

Here are two common recommendations for helping you to judge the right amount of goldfish food:

If that doesn’t sound like much, well… that’s the point! Feeding your goldfish too little is almost never a problem. Whereas over-feeding can be life-threatening.

Why is over-feeding goldfish dangerous?

Common health problems that can happen due to overfeeding include swim bladder problems, constipation, fin rot and dropsy.

Fancy types of goldfish are particularly prone to swim bladder problems. Lots of rich food is hard to process and can lead to constipation or food impaction. Their food should contain no fillers, wheat, or wheat gluten.

Slim bodied breeds, such as commons or comet goldfish, aren’t as prone to constipation due to their organ placement. Lower quality foods can cause fatty liver. Fatty liver can be caused by having a diet that is too high in fat.

Fin rot is a bacterium that will eat at the fins of the goldfish. It shows up on the fins as them being cloudy or turning white. It happens due to stress or living in bad water.

Dropsy happens when the fish is living in bad water or is fed an improper diet. It shows up in the fish by them having a large abdomen or their scales poking out. When excess food is allowed to stay in the tank then it messes with the water quality. The food breaking down can increase ammonia, nitrites, and nitrates in the tank.

What are your thoughts on how often to feed goldfish? How often do you feed your goldfish? Please let us know in the comments.

14 thoughts on “How often to feed goldfish: Get a healthy schedule now!”