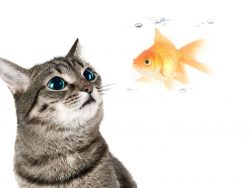 Can you eat goldfish? Is your goldfish edible? Hopefully this goes without saying, but regardless of the answer, you absolutely should NOT eat your pet goldfish! Not only is it cruel but – as you’ll find out below – it’s also pointless and goldfish are probably not very tasty.

However, people often search for the answer to this question on Google or in internet forums. Of course, in most cases, they’re just curious, rather than actually planning to eat their pet (though there are, sadly, reports of goldfish swallowing by some people). We’ve also been asked this question by people who wonder whether you can eat goldfish that are caught in the wild.

So, are goldfish edible and is there ever any reason to eat either pet goldfish or wild goldfish? We want to answer the question once and for all…

Can you eat goldfish?

The short answer is goldfish are as edible as any other freshwater fish; however, they are most likely not very tasty. Goldfish would taste of the foods that they eat – so, for example, a pet goldfish would probably taste a bit like fish flakes and pellets!

Since goldfish are a relative of carp, and carp has been a food source for many years, it makes sense that goldfish edible. However, this also suggests that the taste would be questionable, to say the least. Carp often has a “muddy” flavor, particularly when not prepared well.

Goldfish are also small and bony, which would make it a challenge to get a meal out of a single goldfish.

And finally, in our opinion, the main reason you should never eat a goldfish is that they are a pet animal. Goldfish are to be cared for and enjoyed, not eaten!

EDIT: It’s been pointed out in the comments that goldfish aren’t always pets. They can be found in lakes and rivers too – either in wild populations or as pets that have been released. So should fisherman eat goldfish if they catch them? While this may help manage wild goldfish populations and do some good in preventing them from harming native species, we’d still say no to eating them.

Even wild goldfish wouldn’t taste good, and if they are a pet that has been released then you don’t know how recently they were in a tank or pond and perhaps given medications that are still present in their bodies. Eating wild goldfish might not be cruel in the same way as eating a pet, but we still wouldn’t recommend it! If you have thoughts on this – please add a comment below.

The history of carp as food

Goldfish are decedents of carp, which come from the minnow family of fish, they are big-lipped and large-muscled fish. These fish were introduced to the Americas around 1872. There are many species of carp and they live in various habitats around the world.

Carp is the number one species used in aquaculture – most commonly in China, which accounts for about 70% of commercially produced carp. Carp is used in many Christmas dishes for various cultures. People in Hungary use it in a soup, people in the Czech Republic fry the meat and also make thick soups with the head, and gefilte fish is common in Jewish cuisine.

Carp tend to enjoy hanging out in muddy shallow waters and this can give the meat of the fish a muddy taste. However, if prepared correctly, carp can be a delightful fish to eat. Carp are oily fish and have a taste that is similar to salmon. Due to them having a high oil content this makes their meat moist and flaky. If carp is caught and prepared correctly the “muddy” taste should disappear.

There are some things to take into consideration if you are going to enjoy eating carp. You must put it on ice immediately after catching it and you must remove and clean out the bloodline.

Since they are bottom dwelling fish, they will taste like what they eat. If they live in a low pollution water with healthy vegetation, then they can taste good but if they are living in a dirty environment then they will potentially taste bad.

Carp are a bony fish and the rib bones fork into several prongs which poses a problem when fileting.

Size affects the taste of carp as well. The larger the fish the more course, heavier texture, and stronger flavor they can have.

It is recommended that once you catch a carp that you are planning on eating, you should first give it some bucket time. This is when you leave your carp in a clean bucket of water without feeding it for a couple days it so it can detox the meat.

Keeping carp on ice is also crucial to preserve the flavor of the meat. Once body temperature rises, it increases histamine release in the body. Histamine affects how “muddy” the meat will taste. Plus, if histamine levels are too high, you can get sick from eating the meat.

Why goldfish would make a bad meal

Goldfish taste like what they eat – and fish flakes or pellets are not an enjoyable taste! Plus, as goldfish come from the carp family, they have the same risk of muddy flavor (though this can be avoided by not stressing the fish and immediately getting it on ice).

Another reason that goldfish don’t make a good meal is that – aside from the largest adult goldfish – they tend to be small compared to their carp relatives. This means that trying to debone and prepare a goldfish would take a large amount of time for a very tiny amount of meat. In most cases, it simply wouldn’t be worth the effort.

Goldfish can also contain a bacterium called mycobacteria – aka Fish Tuberculosis – which can be transmitted to humans. The bacteria don’t cause a change in the fish’s appearance and can also lay dormant in the animal. You wouldn’t know if the fish you are eating is infected with this bacterium or not. This bacterium is likely able to survive the cooking process which poses more health risk in eating the goldfish.

So far, we’ve focused on the idea of humans eating goldfish. But what about other pets, such as cats? Or wild birds?

Well the answer here is very similar. Yes, a cat could eat a goldfish, but you absolutely shouldn’t let them.

Sure a cat might be less fussy about taste, but there are lots of other healthier and cheaper options than goldfish! If you have a cat, make sure to get a secure lid for your aquarium and keep your goldfish out of harms way.

Likewise, if you keep your goldfish in a pond, you’ll need to protect them from wild animals. Covering the pond with netting is one way to do this.

Summary: Goldfish are edible, but don’t eat them!

So, can you eat goldfish? Technically speaking, eating goldfish is of course possible, though it is certainly not recommended.

When you consider all of this, why would you bother eating a goldfish?

Instead, let’s continue to enjoy these fascinating creatures as fantastic pets to keep in a pond or home aquarium. In our opinion, goldfish should never be viewed as a snack!

9 thoughts on “Are goldfish edible? Don’t even think about it!”