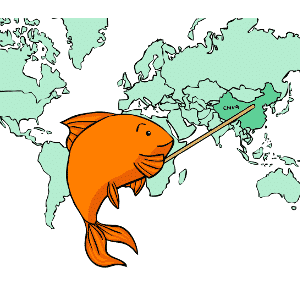 Have you ever thought about where goldfish come from? You might have picked them up from the pet store, but how did they get there?

Why did people start keeping goldfish as pets? And where do pet stores get the millions of goldies that are sold every year?

There’s a fascinating story behind the first pet goldfish and, if you haven’t heard it before, you’ll never guess how it happened!

Read on to find out more.

The origins of goldfish

Over 1000 years ago, people in China used to eat a fish called ‘chi’. At the time, it was one of the most popular types of fish to eat.

Because it was so popular, the Chinese bred and farmed Chi in great numbers. The fish would be kept in large ponds, where hundreds of Chi would be bred and raised, then caught once they were large enough to eat.

Chi were a member of carp family, which includes today’s goldfish. However, they weren’t colorful or interestingly-shaped. They were a dull grey or silver color. Or, at least, most of them were…

Occasionally, a brightly colored chi would be born. Perhaps yellow or red in color.

In the wild, these brightly colored Chi wouldn’t last very long at all. Birds and other predators would spot them far too easily. However, in the relatively safety of the Chinese ponds, they lived long enough to be noticed.

The Chinese started to take an interest in the colorful fish and, rather than taking them away to be cooked like their dull grey brothers and sisters, they would keep the colorful Chi in separate ponds. Effectively, they were keeping them as pets.

As you’ve probably guessed, the colorful Chi would go on to become the goldfish varieties we see today.

Over hundreds of years of being kept in separate ponds, the colorful Chi developed into a distinct species. They became more tame and developed bright new color varieties and the beginnings of different shapes. These were the very first goldfish.

However, the real variation in types didn’t start to develop until people began selectively breeding the fish.

By the year 1500 it had become popular to keep goldfish not just in ponds but in goldfish bowls too. People started wanting certain colors, patterns, shapes and sizes, so they would breed fish that shared certain traits to produce offspring that looked how they wanted.

In the 500 years since, the many different types of goldfish we see today have been developed. Many of them are oddly shaped, have poor eyesight and swim clumsily. They wouldn’t survive for long in the wild, but they exist because humans bred them from Chi.

Where do pet stores get goldfish?

Pet stores don’t usually catch and sell wild fish. This is because it’s far more efficient to breed them in captivity.

The pet trade therefore usually gets fish from:

How do you check your fish’s origins?

To ensure the welfare and viability of the fish they produce, people who commercially breed goldfish on a large scale require a license to do so.

A responsible, licensed goldfish seller should always be able to tell you where and how their goldfish were bred and how they ended up in the pet store.