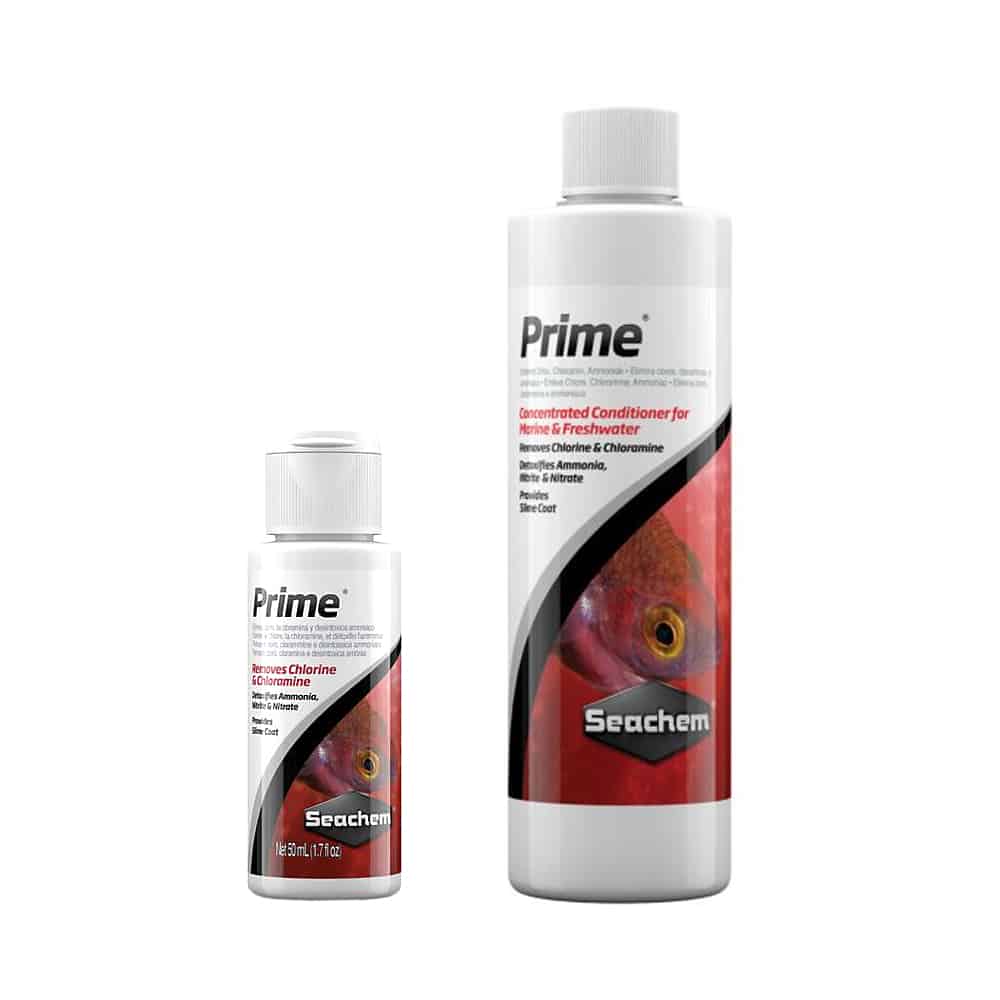 This may be a bold statement, but in our opinion, Seachem Prime is one of a few special products that every goldfish keeper – in fact, every fish-keeper – must have.

And no, we’re not being paid by Seachem to write this! We may earn a (very) small commission if you buy some Prime using one of our links, but there are any number of products we could choose to promote. And, of course, we don’t earn a thing if you buy from your local pet store.

So why are we taking the time to write this article and recommend Prime so strongly? Quite simply, it’s delivered outstanding results in our aquarium.

If you don’t have a bottle of Prime at home right now, read on to find out why we think you should buy a bottle ASAP.

What is Seachem Prime?

Seachem Prime is a type of water conditioner. Basically, that means you add it to your tank water and it makes your water better.

Better how? Well, that’s where it starts to get impressive.

Let’s look at each of these more closely…

Removing chlorine from your fish tank

Chlorine is lethal in a fish tank.

Chlorine in your tank water will kill of the beneficial bacteria that live in your filter and destroy your tank’s cycle.

Not only that, chlorine can directly harm your fish. Damaging the membrane coating that covers their bodies and causing damage to sensitive and important areas like the gills.

That’s right – chlorine will stop your tank cycling, causing other harmful chemicals to build up in the water, and it will damage your fish’s gills making it difficult for them to breathe.

Not something you want in your tank, right? That’s where Prime comes in. Treating tap water with Prime will remove chlorine before it has chance to hurt your fish.

Removing chloramine from your fish tank

If you thought chlorine was bad, chloramine is arguably even nastier stuff!

Chrloramine is a combination of chlorine (bad!) and ammonia (bad!). In other words, chloramine is bad + bad! And that’s definitely NOT something you want in the water that your fish live in.

If chloramine is allowed into your tank then it will have the same effect as chlorine. It will kill the good bacteria that help your fish survive, and it will hurt your fish.

Stopping ammonia in your fish tank

We’ve talked about how Seachem Prime removes chlorine and chloramine, so you might be expecting us to say that it removes ammonia too. But in fact, it doesn’t. However, it does something else that’s very helpful.

Ammonia is a toxic chemical which is very harmful to your fish. It’s produced by the fish themselves, in their waste, and by other organic matter, such as rotting plants.

Fortunately, Prime contains a special “binder”, which makes the ammonia harmless and helps your good bacteria to remove it efficiently.

Detoxifying nitrite in your fish tank

Nitrite is what you get when “nitrifying bacteria” (those are the good guys who live in your filter!) gobble up ammonia.

Having a well cycled tank where ammonia is getting converted to nitrite is a GOOD thing. However, converting ammonia to nitrite is just one step in the cycle, and the nitrite itself is still NOT good.

Nitrite actually stops your fish’s blood from being able to absorb oxygen properly. That means your fish won’t be able to breathe properly and will suffocate.

So again, nitrite is not something you want in your tank. Get some Prime to remove it.

Detoxifying nitrate in your fish tank

Nitrate is what you get when those good bacteria convert nitrite (which they previously made out of ammonia). It’s the next stage in the cycling process.

The good news is that nitrate is not as bad for your fish as ammonia and nitrite. In fact, it’s ok to have some level of nitrate in your aquarium. Ideally you’d aim for less than 25ppm (that’s parts per million), but anything less than 50ppm is ok-ish.

Some tap water has nitrate levels of up to 40ppm, so even if less than that is being produced in your tank, you’ll actually be adding nitrate to your water each time you put fresh water in.

If nitrate levels get too high, your fish will be more likely to get ill and you might start seeing algae bloom in your tank too.

Of course, you’ll be unsurprised to hear that this is where Prime comes in! Treat your tap water with Prime and it will detoxify the nitrate, meaning it won’t stress your fish and lead to them getting ill.

No, not the music. If your neighbor likes to play loud heavy metal all day long, we’re afraid that Prime won’t help. It’s good, but it’s not THAT good!

What Prime will do is detoxify any heavy metals that it finds in your tap water.

So, the same way it detoxifies nitrates, Prime will seek out metals like lead and mercury in tap water and stop them from being harmful to your fish.

Why is Seachem Prime better than the rest?

There are loads of different water conditioners available. You’ll find other products that remove chlorine, or detoxify ammonia. But we’d buy Seachem Prime over all the others.

Why? Because it manages to deliver all of the six great benefits we talk about above, while also having some other pretty special qualities.

It’s not acidic. It’s pH neutral. As you’ll know, fish like the pH of their water to be within a certain range. Prime won’t throw off that delicate balance.

It’s more concentrated than other water conditioners. That means you get more bang for your buck and have to pour less conditioner into your tank.

And finally, Seachem is a trusted brand. Prime is their leading water conditioner and millions of fish-keepers have used Prime with great results for many, many years.

If you care about your fish living in safe water – free from chlorine and chloramine, and toxic ammonia, nitrite, nitrates and heavy metals – you can’t afford not to get some Seachem Prime.

We’ll say it again, in our view, EVERY goldfish keeper needs it.

5 thoughts on “Seachem Prime: Why we love this water conditioner”