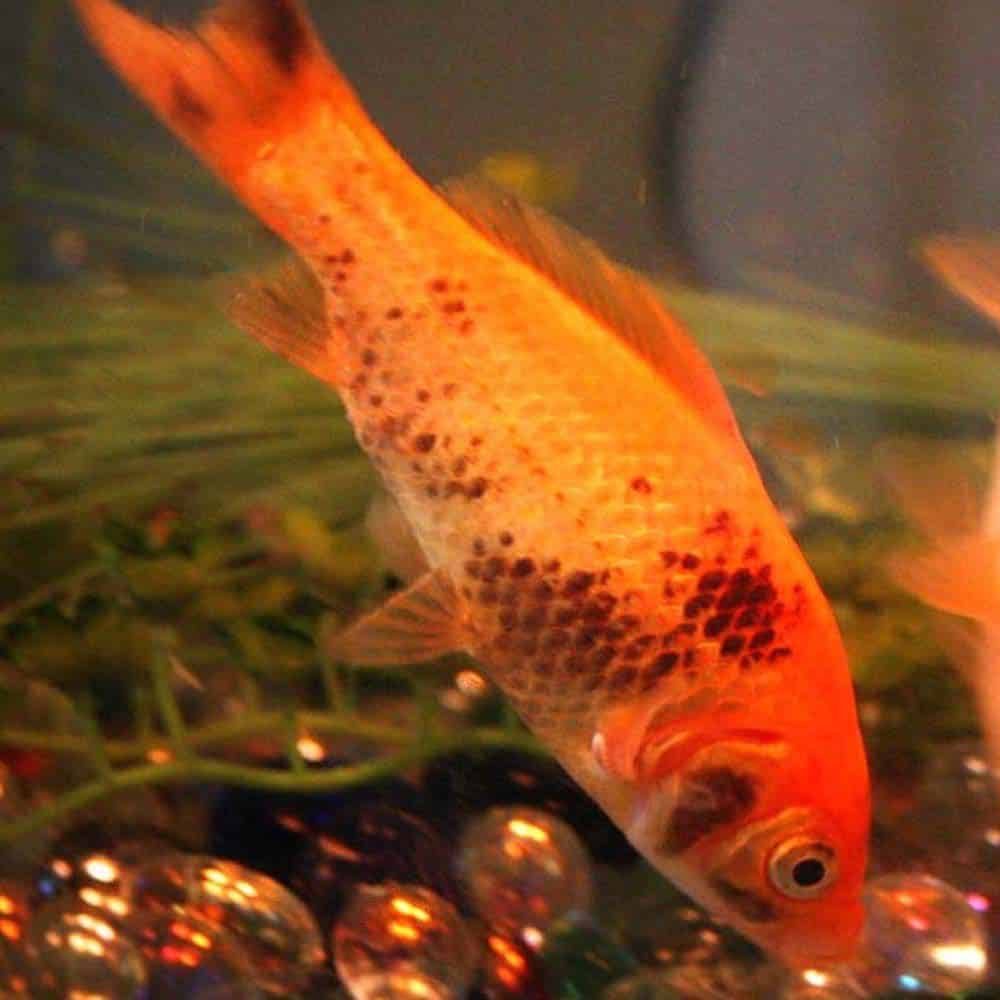 Ammonia poisoning in goldfish is one of the most common problems goldfish-keepers face. In fact, every goldfish-keeper has probably dealt with some kind of ammonia problem at some point.

Also known as “new tank syndrome”, ammonia poisoning often occurs when a new tank has not been set up properly.

Ammonia poisoning is the leading cause of death in goldfish tanks.

What is ammonia poisoning?

Ammonia is the primary waste product that goldfish produce. Your fish releases ammonia into their water through solid waste and through their gills.

Organic matter decaying in the tank also releases ammonia. For example, ammonia is released by rotting food and dead plants.

Signs of ammonia poisoning in goldfish

Ammonia is a silent killer. It is a combination of hydrogen and nitrogen and has no color. This means you won’t be able to see it and you may not realise there is a problem until it’s too late.

There are two ways to know when your ammonia level are too high.

You can use a test kit to measure the ammonia level.

Or you may spot symptoms of ammonia poisoning in your goldfish.

Common symptoms of ammonia poisoning are:

Causes of ammonia poisoning in goldfish

Ammonia poisoning can be caused by a number of different things. These include:

Let’s look at each of these potential problems so that you can avoid them.

The nitrogen cycle & “cycling” your tank

In an established tank, healthy bacteria will break down ammonia before it can harm your fish.

All the ammonia from your fish, their food and rotting plants is effectively eaten up by bacteria and turned into less harmful substances.

Bacteria Nitrosomonas consumes ammonia and releases nitrite. Nitrite is toxic to goldfish but less so than ammonia.

Bacteria Nitrobacter will then consume the nitrite and convert it to nitrate. Again, nitrate is still toxic, but less so than both ammonia and nitrite.

At this point, the bacteria can’t help any more and it’s time for you to do some work! Regular water changes are needed to remove nitrate from your tank.

This process of breaking down ammonia into nitrite and nitrite into nitrate is called the nitrogen cycle.

If you do not already have a nitrogen cycle running in your tank, you need to follow a process called “cycling”.

If you do not cycle your tank, or if something disrupts your nitrogen cycle, then dangerous levels of ammonia will start to build.

More fish means more ammonia. If you add too many fish to your tank, the nitrogen cycle won’t be able to remove it all and it will build to harmful levels.

You should never add too many fish to your goldfish tank.

And never keep a goldfish in a bowl or a tank that is too small for them.

We also advise against fully stocking a new tank straight away. Instead, add fish one at a time to give the nitrogen cycle time to adapt to the increased ammonia that more fish will bring.

Avoiding overfeeding is a very simple way to avoid excess ammonia in your tank.

If your fish eat all of their food, there won’t be uneaten food rotting in the tank. This means less ammonia in the water.

This is just one reason why it’s important to learn how often and how much to feed your goldfish.

Tap water can contain ammonia as well as other toxic chemicals.

You could therefore be unknowingly adding ammonia to your tank every time you do a water change.

The way to avoid this is to treat your water before adding it to the tank. We highly recommend a product called Seachem Prime for this purpose.

Goldfish need a filter. Filters don’t just remove waste from your water, they also provide a vital home for the “good bacteria” that drive the nitrogen cycle.

The effect of pH on the nitrogen cycle

pH is one factor that can stop the nitrogen cycle working as it should.

A low pH, under 6, means the bacterium Nitrosomonas will not be able to process the ammonia appropriately. If the Ph gets too low then the nitrogen cycle will cease completely. Equally, you don’t want your pH to be too high.

How to cure ammonia poisoning in goldfish

Like most goldfish problems and diseases, ammonia poisoning is one of those things that is better avoided than cured.

It’s much easier to cycle your tank properly, not add too many fish and avoid overfeeding, than it is to lower ammonia levels and treat goldfish once ammonia has become a problem.

However, it is possible to treat ammonia poisoning.

Step 1: Find out what the problem is

The first step is to determine the reason for the high ammonia levels.

There’s no point trying to treat ammonia poisoning while the underlying problem remains. You’ll need to fix the cause of the high ammonia levels first.

For instance, if you find that your tank is overstocked with too many fish, you’ll need to get a bigger tank.

Step 2: More your fish to a quarantine tank

Removing the affected fish into a quarantine tank can be a good move while you sort out the problems in the main tank.

For example, if you have two goldfish in a 10 gallon tank and you’ve realise this is too small a tank for them (which it is!), it would be beneficial to buy a larger tank and separate the fish. You could keep one fish in your 10 gallon and move the other to a 30 gallon tank. When ready, the 30 gallon could then become their main home.

However, do remember that ammonia can build in quarantine tanks too! You’ll therefore need to cycle and test both tanks to maintain safe water parameters.

Goldfish can live a long time without food. It’s therefore safe to stop feeding your goldfish or only feed them a tiny amount while you work to get ammonia levels under control.

As the nitrogen cycle isn’t reducing ammonia levels for you, you’ll need to do it manually.

Get a test kit and conduct a large water change every time the ammonia levels reach a high level.

You’ll want to measure nitrite and nitrate levels as well as ammonia. When you measure zero ammonia, zero nitrite and some nitrate, you know your tank is cycled.

Step 5: Help your fish to breathe

As ammonia poisoning can permanently affect your fish’s ability to breathe, it can be a good idea to add aeration items to the tank.

Air stones and bubblers will keep the water moving, including at the surface, and help more oxygen get into the water.

You can also try to keep your tank water cool, as cooler water contains more oxygen than warmer water.

Ammonia poisoning can be a very dangerous problem.

The best way to avoid ammonia build-up is to make sure your tank is properly cycled. This means that bacteria are converting ammonia into nitrite and then into nitrate, which will be removed during water changes.

Testing your tank water regularly is crucial to ensure that ammonia levels don’t start to rise without you knowing.

The proper amount of ammonia in a tank is zero.

If ammonia starts to build then it could be a sign of a problem with your nitrogen cycle, that the tank is overstocked, or that you are feeding your fish too much.

Treating a tank with high levels of ammonia will involve lots of water changes to keep the ammonia under control until the tank is cycled properly.

2 thoughts on “Ammonia poisoning in goldfish: A deadly problem!”