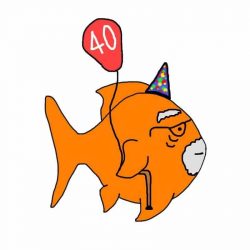 ‘How long do goldfish live?’. It’s a great question with a very surprising answer! On average, goldfish live for 5 to 10 years. However, their lifespan varies massively depending on how well they are looked after and the conditions they live in.

A goldfish kept in poor conditions will die within days or weeks. Whereas a goldfish that is well looked after can live for more than 10 years. Sometimes much more… One goldfish even lived to be 45 years old!

The table below shows how long goldfish live in different conditions.

Up to a point, a larger tank will compensate for less than ideal care.

How to make goldfish live a long time

The best way to make your goldfish live a long time is to provide a large tank and care for them well.

To give your goldfish the best chance of living a long time, you should:

We recommend reading our article on why goldfish die. It will help you to understand the reasons goldfish often don’t live a long time. You can then avoid making those mistakes.

Of course, good care isn’t the only factor in making your goldfish live a long time. Genetics also have a big part to play.

Buying your goldfish from a quality independent pet shop or private breeder will make sure you get a good, healthy fish.

Now that you hopefully have a good general understanding of how long goldfish live, let’s take a closer look at some of the major factors that affect their lifespan.

How long do Common, Comet and Shubunkin goldfish live?

Common goldfish, Comets and Shubunkins are the longest-living types of goldfish.

They need more space than fancy goldfish, but given enough room in very large tank or pond, they can live for well over 10 years.

What is the lifespan of fancy goldfish?

As fancy goldfish have been selectively bred to display certain traits – such as round bodies, flowing fins and bulging eyes – they are often more susceptible to health problems. For instance, swim bladder problems are more common in fancy goldfish.

Fancy goldfish also tend to be more delicate and less hardy than common goldfish. You will need to be extra careful about water quality if you want your fancy goldfish to live a long time.

How long do carnival goldfish live?

Carnival goldfish aren’t a distinct variety of goldfish. The type of goldfish that you win at a fair or carnival is usually a common goldfish.

This type of goldfish has the potential to live for decades. But that is far less likely for carnival goldfish than it is for fish bought at a reputable pet store or from a breeder.

There are a few reasons for this:

How goldfish lifespan is affected by water volume

The bigger your tank or pond, the more likely it is your fish will live a long time.

This is because you are more likely to be able to maintain good water quality and stable water parameters in a large body of water.

Larger tanks and ponds are also more likely to be well cycled and have more oxygen in the water.  All of this can greatly increase your goldfish’s chance of living a long life.

How long do goldfish live in a bag?

How long goldfish can live in a bag very much depends on the type of bag.

Some goldfish are shipped from stores to new owners by mail, meaning they often have to survive in a bag for around 2 days. Stores use special packaging and ‘breather bags’ to make this possible.

A goldfish may survive around 8 to 12 hours in a normal bag. The length of time they survive depends on how quickly they use up all the oxygen.

We recommend introducing your goldfish to your tank or pond as quickly as possible. This minimises the amount of time they spend in a bag. However, do be careful to introduce your goldfish safely and gradually.

How long do goldfish live in a bowl?

It’s very unlikely that a goldfish will live for more than a few months in a goldfish bowl. Assuming the bowl is small and unfiltered – like most goldfish bowls – a goldfish would be doing extremely well to make it to one year in such poor conditions.

Goldfish produce a lot of waste.

In a small bowl, no amount of water changes is going to get rid of it all.

The waste will therefore build up in your bowl and eventually poison your goldfish.

To keep goldfish properly and have them live longer, healthier lives, you need a big tank or a pond.

How long do goldfish live in a pond?

A pond is the ideal place for goldfish to live a long time. Ponds offer a large water volume and a big surface area, which is great for getting lots of oxygen into the water.

There is no reason why your goldfish shouldn’t survive for over 10 years, potentially 20 years or more, in a pond.

You just need to keep them safe from predators, such as birds, and make sure temperatures stay within an acceptable range, even in the winter.

How long can goldfish survive without food or water?

A goldfish that has no access to food will eventually die of starvation. While goldfish out of water will suffocate in a short space of time.

However, you may be surprised by just how long goldfish can live without food or water.

Goldfish can survive for at least two weeks without any food at all. Though this isn’t recommended.

If you’re going away on a short holiday, there is likely more risk of your goldfish being over-fed than there is of starvation. Automated feeders, or well-meaning pet-sitters who don’t know better, often feed goldfish too much.

One goldfish survived for 134 days without being fed. Though it wasn’t entirely without food. The fish survived on algae and scraps of leftover food still present in the tank from previous meals.

How long do goldfish live out of water?

For obvious reasons, water is pretty important to goldfish! As you would expect, a goldfish out of water will not survive very long.

However, if you’ve assumed they would die within seconds or minutes – you may be surprised.

Goldfish can actually live for up to an hour out of water.

This could be stretched even further is there is at least some water – a small puddle for example. Some goldfish have survived up to three hours on the floor, because some water came with them when they jumped out of the tank.

Of course, being out of water is extremely dangerous for a goldfish. You should never deliberately remove your goldfish from water.

If your fish jumps out of their tank accidentally, you should put them back as quickly as possible.

How long have your goldfish lived?

The Goldfish Tank ran a survey of our readers, asking them how long their oldest goldfish has lived. An incredible 21,491 people responded and the results are fascinating.

That shows the difference that good goldfish care can make!

What is the average lifespan of a goldfish?

In conclusion, a number of different factors affect the lifespan of a goldfish. This makes it very difficult to identify an average goldfish life span or an exact goldfish life expectancy.

Based on our survey of more than 20,000 goldfish keepers, we can say that the average lifespan of a pet goldfish is around 4 years.

However, we now know that – with better care – this number could be a lot higher.

7 thoughts on “How Long Do Goldfish Live? 7 Ways to Help Them Live Longer!”