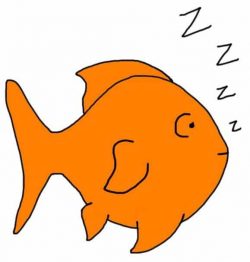 Goldfish do sleep, but not in the same way people do. Goldfish sleep is more like resting.

Like people, goldfish tend to sleep at night time, when it’s dark. Watch your fish at night and you might notice them hovering in one spot, only moving slightly to keep themselves stable in the water.

This behaviour tells you that your goldfish is sleeping.

The hovering spot will usually be somewhere near aquarium decorations and lower down in the tank.

All about goldfish sleep

Do goldfish rest with their eyes open?

You’ll notice that your goldfish don’t close their eyes when they sleep. This is because they can’t!

Goldfish don’t have eyelids, so even when they want to rest, they have to keep their eyes open all of the time. 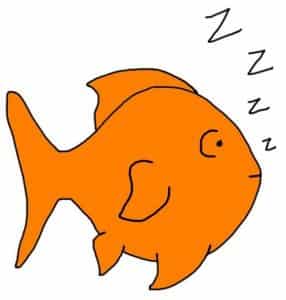 Do goldfish sleep at night?

Like humans, goldfish rest better in the dark than in brightly lit rooms. You should therefore ensure that your aquarium light is switched off for at least 12 hours per day.

It generally makes sense for your goldfish to follow a similar pattern to your own day.

Switch your light on when you get up in the morning and switch it off no more than 12 hours later, shortly before you go to bed.

Let your goldfish sleep when you do!

How do I know when my goldfish is sleeping?

When you notice this, you should try to avoid startling your fish. Don’t make any sudden movements near the aquarium, don’t attempt to feed your goldfish and don’t switch on your aquarium lights.

Do goldfish sleep upside down?!

Some goldfish keepers see their fish floating upside down (or leaning heavily to one side) and assume their goldfish is sleeping. Unfortunately, this is not the case!

If you’ve noticed your goldfish swimming upside down, or always leaning to one side, then you should research “swim bladder disease”.

1 thought on “Do Goldfish Sleep? How, when and how can you tell?”