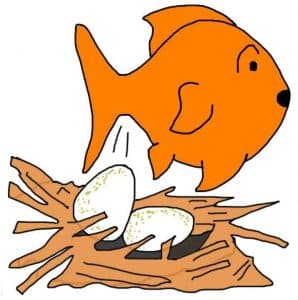 Goldfish breeding is not an easy task. Unlike livebearers, such as guppies, goldfish can be relatively difficult to breed in captivity.

Before commencing a goldfish breeding program, always think about the amount of tank or pond space available to you. Do you have room for new fry in addition to your existing fish? If not, don’t try to breed goldfish!

All about breeding goldfish

To start your own goldfish breeding program you will need the following equipment:

– Plants (preferably live plants, like hornwort, though silk or plastic will do)
– Sponge filter and an air pump for the fry tank
– Spawning mop (optional)

And, of course, male and female goldfish!

You will need to buy slightly older fish or wait for your goldfish to reach maturity before you are able to determine which are male and which are female. Goldfish can usually be sexed from around 1 year of age.

Ideally, you would keep more males than females, as this increases the chance of a successful spawning. However, this depends on the space available to you and you may only have room for a single pair in your tank or pond.

Check out this site to see the differences between male and female goldfish.

Before beginning your goldfish breeding program, you must first establish your main tank, including filtration, plants, a spawning mop if you want one, and a heater

The spawning mop is optional but we do recommend them. A spawning mop will help protect the eggs from their parents and will make it easier to move the newly hatched baby goldfish into the fry tank. You can buy a spawning mop in your local pet shop.

Once the main tank is properly cycled you can add your adult fish (or juveniles that you plan to raise to adulthood and then breed).

Then, shortly before beginning the goldfish breeding program, set up a smaller tank for the fry. This fry tank should only filled to between six and eight inches deep, with water from the main tank.

When living in the while, goldfish breed in the spring. Because of this, goldfish breeding is triggered by a change in temperature (from the cold winter to the warmer spring).

To replicate this temperature change in your own goldfish breeding setup, first lower the temperature of your tank to between 10°C/50°F and 12°C/54°F. Then, when you want to induce breeding, raise the temperature of the water by 2°C/3°F per day, until it is between 20°C/68°F and 23°C/74°F.

Goldfish are ready to breed when males display white “pimples” on their gills and fins (like this) and females look fatter than usual.

You may notice the male chasing the female around the tank and poking her in the abdomen. This is spawning behaviour, though it can be easily be confused with fighting.

Following this spawning behaviour, the female will swim to a planted area of the tank – or near to the spawning mop – and lay her eggs. Goldfish lay lots of eggs, and they’re very sticky, so you will easily spot all of them stuck to nearby plants.

When the male notices the eggs (which won’t take long!) he will swim over to the area where they were laid and spray sperm to fertilize them.

What to do with goldfish eggs

Unfortunately, goldfish will eat their own eggs, so you can’t just leave them in the main tank! You must therefore remove them from the tank or pond as soon as possible.

Remove the eggs (or the whole plant or spawning mop) and put them into the smaller fry tank that you set up earlier.

to slowly raise the temperature of the water if necessary.

Lighter colored eggs have a much greater chance of hatching, so you can dispose of dark eggs and only keep the lighter ones.

You should NOT feed goldfish fry straight away. For the first couple of days after hatching, the fry will lie on the bottom of the tank and don’t need any food. It’s only once they start freely swimming around the tank that you need to feed them.

Once the fry do start swimming around, but while they’re still too small for fish foods such as Hikari First Bites

, you should feed them egg yolk dissolved in water. To do this you simply need to:

Finally, don’t add any fry to the main tank until they are big enough to survive with the other fish. This means that they should be strong swimmers, too big to get sucked into the filter, and bigger than the mouths of the adult fish!

And that’s how to breed goldfish! We hope you find this useful and do let us know if you have any questions of comments.