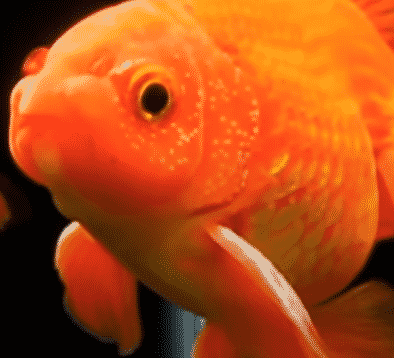 The easiest time to tell whether goldfish are male or female is during spawning season. In the wild, this is in the spring and summer, though could be any time of year in the home aquarium.

By looking out for each of these clues during spawning season, you can work out which of your goldfish are male and which are female.

Let’s look at some pictures of male and female goldfish so that you know what to look out for.

In goldfish, the vent serves two purposes. It’s how they release waste and it’s how they breed.

The vent in a male goldfish is flat and not very noticeable. It’s just a small slit hidden away under their tails.

In female goldfish the vent will become swollen and puffed out during breeding season.

The difference can be seen in the photos below, from Bristol Aquarists Society.

Male goldfish will get small white bumps that appear on their gill covers, these are called breeding tubercles.

The spots or “breeding stars” usually also appear on the fish’s pectoral fin, as you can see in the photos below.

What are breeding tubercles for?

It’s not completely clear what goldfish breeding tubercles are actually for. However, the scientific evidence suggests they help to show that the male goldfish is in a healthy breeding condition.

The tubercles could therefore be an outward sign to female goldfish that a male is a good choice of mate.

How to tell different between breeding stars and ich parasite

The white breeding tubercles can easily be mistaken for white spot disease, also known as Ick or Ich.

You should verify that spawning season is happening before trying to treat for any disease. Inappropriately treating a disease can cause disruption to the spawning time and health of the aquarium or pond.

Breeding stars appear as small dots in a very neat, regular pattern. They’re also most commonly found on the gills and pectoral fins (though can be found anywhere on the goldfish).

Ich causes similar looking white spots, but the spots tend to vary in size and appear with no organised pattern. They also appear randomly, all over the fish.

During spawning season, male goldfish will chase females around and bump them into the sides of the tank.

Seeing one goldfish chasing another like this gives you a clue about whether they are male or female.

Chasing suggests that the fish is male. While being chased suggests the goldfish is female.

However, this isn’t always a fool proof system. Particularly if you are housing different ages of goldfish in the same tank.

Sometimes, when pheromones are released by fish that are spawning, younger immature goldfish will start to act out behaviors that aren’t appropriate to their gender.

You may think you have a female because it is being chased, but then the following year it gets breeding tubercles and you realise it’s a male.

Chasing behavior should always be combined with other signs (such as breeding tubercles or releasing eggs or milt) in order to accurately work out whether a goldfish is male or female.

Releasing eggs and milt: The easiest way to tell if a goldfish is male or female

Of course, the easiest possible way to work out whether a goldfish is male or female is to spot them releasing milt or eggs.

Here are some pictures to help.

How old do goldfish need to be to tell if they are male or female?

The physical differences between male and female goldfish will only show once the fish has reached sexual maturity and is in good health.

If you are trying to breed goldfish, then the best thing to do is buy six fish from the same tank at the store because you get a high chance of getting a male and female.

Just be sure that you have a large enough tank or pond to house them all safely.

Other physical characteristics of male vs female goldfish

The primary signs of male vs female goldish are:

However, these secondary rules don’t hold true for all goldfish. We therefore recommend not drawing any firm conclusions about whether a goldfish is male or female until you spot some of the primary signs.

14 thoughts on “Male or female goldfish? How to tell (with pictures)”