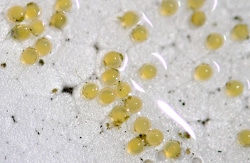 You won’t be surprised to hear that goldfish eggs don’t look like bird eggs! Goldfish eggs actually look like small round “bubbles”. They’re clear or light yellow in color, with a small dark spot in the middle of the egg.

Goldfish eggs are extremely sticky. If your goldfish lay eggs then you’ll probably find them attached to a leaf or piece of plant.

If you’re deliberately trying to breed your goldfish then we recommended using a spawning mop. This mop is specially designed to catch the goldfish eggs, which will help you find them and keep them safe. Adult goldfish are notorious for eating their newly hatched eggs quickly, so allowing the eggs to be laid in a special tank or removing the adults is the safest option to allow the eggs to hatch.

Female goldfish can lay up to 1000 eggs at one time and multiple times a week if the water temperatures are just right.

The eggs will become more see through over a couple days, assuming they are fertile. If they are not fertile then then they will turn white.

After two or three days, tiny black spots will show in the fertilized eggs, these spots are the developing eyes of the fry (baby goldfish)!

The eggs can hatch in as little as four days if the water temperature is kept at 70-75F, if the water is warmer or colder then hatching can take up to seven days or could create health problems for the developing fry.

Scum can grow on the eggs very easily so it’s important to keep the water well aerated or add a water cleanser to prevent any fungus or scum buildup. If fungus does build-up on the eggs, then it can prevent them from hatching. Methylene Blue is a common water additive that prevents fungus growth and special fungus treatments are available.

How often do goldfish lay eggs?

To replicate this in an aquarium, the tank will need to be slowly warmed over the course of a few days to signal to the fish that it is time to spawn. Starting the temperature of the aquarium at 50F and warming it up to 70F is the ideal temperature range.

The female fish will send out pheromones to signal the males to start producing milt and then after some dancing and chasing the female will lay the eggs and the males will coat them in their milt.

Goldfish will lay their eggs on a fixed object in the tank or pond. Due to the sticky coating on the eggs, they will adhere to a fixed surface.

How to tell when your goldfish is going to lay eggs

Female and male goldfish will start to show subtle physical signs that the female is ready to release eggs and milt.

Female goldfish are naturally rounder than males, but when they are ready to release eggs, they grow a little bit rounder. This is best seen from looking down on the fish to see a change in the size of the belly.

Male goldfish will have small white bumps, called spawning tubercles, appear on their heads, gill covers, and pectoral fins. These bumps signify that spawning is about to occur between the male and female goldfish.

It is good to look at your fish prior to spawning to make it easier to see any physical changes in the fish in the tank or pond. Female will exhibit other behaviors when she is getting close to laying eggs. She will have changes in her activity levels and feeding levels.

Slowing down or appearing slightly sluggish can be seen as a precursor to egg laying. During this time, she may also hide a little bit in parts of the pond or aquarium. She may even hang around a spawning mop that is in the tank or pond.

They can start to eat a little less when they are about to spawn. They should not suddenly stop eating, this can be a sign of illness and not egg laying.

Goldfish will not spawn when they are under one year old and are in their prime for spawning when they reach three years old.

Once the female goldfish is ready to release her eggs, she will release hormones into the water to signal the males that it is time. The males will then start to exhibit spawning behaviors. These behaviors are when males will start pushing into the belly of the female fish and chasing her around the tank. This pushing behavior will cause the female to release her eggs so the male can lay his milt on the eggs to fertilize them. If the female is extremely full of eggs and she is picked up, then it is possible that the eggs can fall out of her.

How long does it take goldfish eggs to hatch?

When eggs are laid, they should be removed from the main tank as soon as they are noticed. Eggs left in the main tank for too long are at risk of being eaten by the other fish.

What should I do with eggs that I find in my tank?

If you don’t want to keep the eggs and aren’t interested in them hatching, then you can leave them in the tank and the adult goldfish will eat them. Goldfish will quickly eat the eggs once they are laid. You will want to check that all the eggs are removed, whether by removing or allowing them to be eaten, to ensure that they don’t cause any water contamination.

Unfortunately, goldfish will eat their own eggs, so if you do want the baby goldfish to have a chance of hatching, you can’t just leave the eggs in the main tank. You must remove the eggs from the tank or pond as soon as possible.

Once the eggs are moved into their own tank then the water should be kept at a temperature range of 70F-75F degrees, this temperature range means you can see eggs hatching in as little as four days. The ideal depth of the water for eggs to hatch and the subsequent fry to develop appropriately is six to seven inches.

If you do want the eggs to hatch then you will hopefully have prepared a small fry tank before the eggs are even laid. You can find out more about this in our article on goldfish breeding.

If you do have a fry tank ready then you can move the eggs – or even the whole plant or spawning mop that the eggs are attached to – and put them into the small tank. If not, you’ll have to quickly find a temporary container!

Whatever container you use, you should ensure that the fry tank is a similar temperature to the main tank. Use an aquarium heater to slowly raise the temperature of the water if necessary.

Finally, you don’t necessarily have to transfer all of the eggs to the fry tank. Lighter colored eggs have a much greater chance of hatching, so you can dispose of dark eggs and only transfer the lighter ones.

In the egg tank, you need to have proper aeration to prevent scum buildup on the eggs. Scum buildup can cause disease to move across the eggs and kill them off.

After two days, the eggs in the tank will change color slightly. You will be able to see eye development after two days in the healthy eggs and two days after that the baby fish should emerge.

A large amount of fry will be born, but a large portion will also die off due to inadequate food, disease, and poor conditions. Once the fry start hatching, you will need to verify the water surface is free from scum or any sort of buildup. The fry will need to get to the surface to take a breath of air which allows their air sacs to inflate. After a day or two the fry will become free swimming and want to eat.

Goldfish will lay their eggs in a shallower part of the pond and near the edges. You will want to place spawning mops or plants near the edge, so the eggs are easier to spot and remove.

Goldfish will spawn in the springtime and you will want to check frequently for any eggs that are laid that you want to keep.

Once the eggs are found, you should gently rinse them in fresh water and move them to their own aquarium to hatch. If you aren’t planning on keeping the eggs, then you can leave them in the main pond and allow the other fish to eat them. Goldfish eggs look the same in the pond as they would in an aquarium.

5 thoughts on “Do Goldfish Lay Eggs? What Goldfish Eggs Look Like – With Pictures”