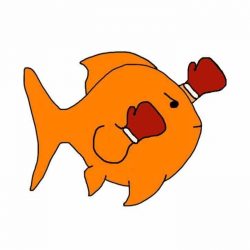 If you’d like to keep more than one goldfish in your tank then you may be wondering whether goldfish fight each other. And if they do, what you should you do to stop goldfish fighting?

The answer is yes. Goldfish do sometimes fight each other. However, it’s difficult to know in advance whether your goldfish will be aggressive.

Different goldfish have different personalities, so some goldfish will fight more than others.

Goldfish are far more likely to fight when they have something to compete over. For example, food or territory.

To prevent this, you should make sure your goldfish are well fed and that your tank contains lots of plants and decorations to hide behind.

How to prevent goldfish from fighting

The best way to stop goldfish from fighting is really quite simple – only keep one goldfish in your tank!

If you only have one goldfish, we suggest thinking carefully before getting another. Goldfish don’t get lonely, so you don’t need to get them a tank mate. It’s far better to keep one fish in a healthy environment than risk problems caused by having more than one fish.

But what if your goldfish are already fighting each other? How do you stop them being aggressive towards each other?

How to stop goldfish fighting each other

If you notice one goldfish chasing another goldfish all the time, or biting them, then they are fighting.

If this is happening in your tank, you’ll need to do something about it. Keeping goldfish can be a really peaceful and rewarding hobby that even helps to alleviates stress, but it won’t be so relaxing if your fish are fighting all the time!

So, how do you stop goldfish fighting?

Will goldfish fight other fish?