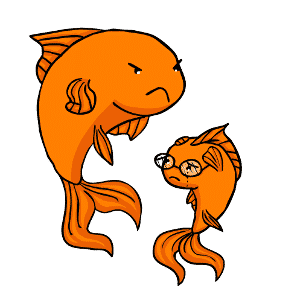 While goldfish tank inhabitants usually rub along just fine, occasionally, the hobbyist fish keeper can find themselves faced with the issue of fighting goldfish, or one fish appearing to bully others.

While disputes within the tank will often sort themselves out over time, in some cases, bullying fish can become a problem, and even cause harm to your fish, as well as increasing their stress levels.

In this article, we cover some of the most common reasons for bullying and aggression within the goldfish tank and suggest some solutions.

One of the most common causes of aggression and bullying between fish is overcrowding.

Ensure that you don’t have too many goldfish in your tank. If you find that you have too many fish then you should find them a new home or invest in a second tank!

Even if your tank is very spacious, goldfish will sometimes fight and bully each other if they are in competition for resources such as food.

While it is easy to inadvertently overfeed goldfish, take care not to underfeed them either. Live plants within the tank can provide an excellent supplementary source of food for goldfish, as well as providing hiding places for smaller fish. Bushy and fast-growing plants like hornwort are perfect for this purpose.

During breeding season, it’s normal for goldfish to fight over mates or to fight as part of their breeding displays and dances.

If one fish within the tank becomes sick or injured or otherwise shows signs of weakness, the other fish will often quickly band together to attack them.

If you spot a sick or injured fish, it is important to remove them to a quarantine tank as soon as possible, both to avoid them infecting the other fish, and for their own protection while they heal.

There are a huge number of different varieties of goldfish, and sometimes goldfish keepers are not entirely sure which types they have in their tank.

Some varieties are renowned for being rather more dominant and potentially aggressive than others. An example of this would be the Ryukin goldfish.

It is unwise to keep more aggressive varieties of goldfish with types that have potential vulnerabilities, such as fantail goldfish or bubble-eyes.

2 thoughts on ““My goldfish is a bully!” How to handle aggressive goldfish”