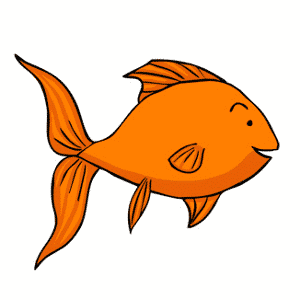 Check out our top ten jokes about goldfish and share your own in the comments!

Two goldfish are in a tank.
One turns to the other and says “do you know how to drive this thing?!”

Two goldfish are in a tank.
One turns to the other and says “It’s a bit wet in here”
The other says “Wow! A talking fish!”

What did the goldfish say when he swam into a wall?
“Dam.”

What fish do goldfish see when they need an operation?
A sturgeon.

A man walks into a cafe with a goldfish under his arm
He asks the owner “do you sell fish cakes?”
The owner says no
The man says “That’s a shame. It’s his birthday today.”

Where do goldfish keep their money?
In the river bank.

What do you call a goldfish with no eyes?
Goldf sh.

Why are goldfish easy to weigh?
They bring their own scales.

What is stranger than seeing a cat fish?
Seeing a goldfish bowl.