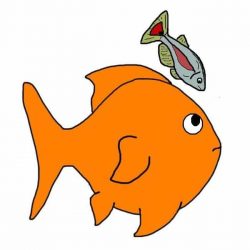 In this article, we discuss the tricky issue of goldfish tank mates. Should you keep other fish with goldfish? Can you keep them with all goldfish or only fancy goldfish? And what makes some fish suitable tank mates while other fish are not?

The thing to realise when choosing goldfish tank mates is that goldfish have very specific needs. Any other fish you keep must be able to survive and thrive in the same living conditions.

It’s like finding a room mate. If one person works nights and the other likes to play loud music all day, it isn’t going to work.

Similarly, if one fish likes warm water and another likes cold water, they’re not going to like living in the same tank.

So, when deciding which fish would make a suitable tank mate for a goldfish, we first need to ask ourselves: what kind of tank conditions do goldfish like?

To keep other fish with goldfish you’d need to find a type of fish that:

That’s quite a lot to ask! So – unless you have a very big tank – we generally recommend keeping goldfish on their own. This is particularly true for slim-bodied goldfish – such as Common goldfish, Comets and Shubunkins – which grow to a large size and need a lot of room.

However, there are some fish that are compatible with slower-swimming fancy goldfish.

It is possible to keep other fish with fancy goldfish. You’ll just need to make sure that the fancy goldfish, and their tank mates, get access to food, and that you make the right choice for your goldfish tank.

To help you make an informed choice, here are 8 key questions to ask yourself, and consider for your particular goldfish tank, when choosing tank mates for fancy goldfish.

Is your tank big enough?

Fancy goldfish grow to be large fish, so you will need a big tank even for just one goldfish. If you start to add tank mates too, you’re going to need an even bigger tank. Are you sure you have enough space?

Will the other fish nip your fancy goldfish’s fins?

Because of the amount of space slim-bodied goldfish need (we’re talking about Common goldfish, Comets and Shubunkins) we only recommend keeping other fish with fancy goldfish. However, this comes with its own problems…

Fancy goldfish usually have long, flowing fins. And lots of other fish like to nip at them!

Will the other fish suck on your fancy goldfish’s scales?

Another potential issue is some fish, such as Plecos, sucking on your goldfish. While this is unlikely to be immediately fatal, it is very distressing for your goldfish and can lead to injuries that get infected. This can all add up to your goldfish having an unhappy and short life.

Will the fish chase each other around the tank?

Some fish are more active than others and bigger fish often see smaller fish as food. Equally, smaller fish, attracted to the fins of fancy goldfish, may start chasing them around the tank.

If either your goldfish or their tank mates start chasing each other, it can lead to a lot of stress, which causes your fish getting sick.

Could the goldfish try to eat the other fish?

If your goldfish’s tank mates are significantly smaller than your goldfish, it is likely that the goldfish will at least try to eat them.

This is dangerous for two reasons. Obviously, it could lead to one fish getting eaten. But it could also lead to your goldfish choking on a smaller fish.

Will either fish out-compete the other for food?

If one fish is a much faster swimmer than the other (for example Zebra Danios, which are fast swimmers, with fancy goldfish, which are slow swimmers) you may find that the fast fish always gets to food before the slow fish.

There are usually tricks to get around this, but it will mean extra effort to make sure all of your fish are well fed.

What are the risks of adding new fish to a tank?

If you already have a healthy and stable goldfish tank then it’s worth considering the fact that adding new fish comes with risks.

Not only are all the issues described above a potential problem, but new goldfish tank mates could introduce diseases to your aquarium. This is why you should always quarantine new fish before adding them to your tank.

Will the fish look good together?

A minor consideration really – especially compared to the other matters of life and death! – but it’s worth thinking about how new tank mates will change your tank’s look and feel.

Do you want colorful fish? Are you interested in keeping different kinds of fish, such as catfish or sucker fish? Maybe you want to add a type of fish that swims in a different area of your tank to your goldfish? Or a small slender fish with a very different appearance to your round-bodied fancy goldfish?

All of these decisions will affect the appearance of your tank.

Every tank is different and you should always make choices based on research and your own particular situation.

That said, we’re here to help and our experts have put together a list of potential fancy goldfish tank mates you should consider.

What if you get it wrong?

Keeping the wrong types of fish with goldfish is one of the most common mistakes new goldfish keepers make!

For example, putting your goldfish and betta fish together may look nice, but they have very different requirements and will probably act very aggressively towards each other.

Whenever you add new tank mates to your goldfish tank, you should be prepared to reverse the decision and remove the fish at the first sign of serious trouble.