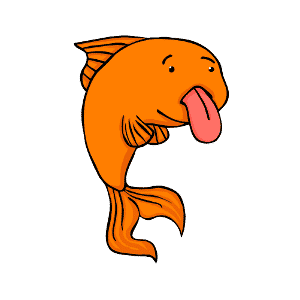 Two of the most common questions asked by goldfish keepers are “do fish have tongues?” and, if so, “how do goldfish tongues differ from human tongues?”

While it’s not essential to know about your fish’s biology. We find that taking an interest in questions like this helps people to better understand their pets. And, if you understand your pet, you can take good care of them.

Do fish have tongues?

Fish – including goldfish – do not have tongues. Or at least, not in the same way that people do.

Instead, they have a bony structure in their mouth called a basihyal, which looks a lot like a tongue and lies along the bottom of the mouth.

If you’ve looked closely at the mouth of your goldfish, you might have noticed it.

The basihyal has a very limited range of motion and few muscles, and it does not include taste buds. It’s therefore very different to a human tongue in every way other than its location in the mouth.

It is thought that the basihyal evolved as a barrier and additional layer of protection for the ventral aorta of the fish, which is very close to the mouth. The basihyal’s position helps to protect the ventral aorta from damage that could be caused by goldfish prey that thrash about or go down the wrong way when being eaten!

Human tongues are very strong and muscular, and perform a whole range of functions. We use our tongues to enable speech, to help us chew and digest our food, and vitally, to allow us to taste different things.

The surface of the human tongue is covered in nerve endings called taste buds. These are designed to detect different tastes, such as sweet, sour, salty and bitter.

The tongue is one of the main ways that we taste our food, as well as helping us to identify certain poisons!

So if goldfish don’t have tongues, can they taste their food?

Can goldfish taste their food?

Yes! goldfish can taste their food. In fact, over 20% of a goldfish’s brain is dedicated to its sense of taste!

You’ve probably seen your goldfish rooting through gravel and taking small stones into its mouth along with food. Along with its vision and sense of smell, a goldfish’s sense of taste is vital when foraging for food.

If a goldfish had to rely on eyesight alone then it would not always be able to tell the difference between gravel and food. However, using its sense of taste, the goldfish is able to separate the food from the gravel inside its mouth. This allows it to spit out the gravel and swallow the tasty food!

Do goldfish have taste buds?

Yes, goldfish do have taste buds. However, unlike in humans, goldfish taste buds are not located on the tongue.

So, next time you see your fish skillfully separating inedible objects from pieces of food, you’ll know that a combination of eyesight, smell and a keen sense of taste is at work.

Also, knowing that your goldfish can taste its food is all the more reason to feed it a varied diet – you wouldn’t want to eat the same thing every day, so why should your goldfish?!

1 thought on “Do goldfish have tongues? The truth might surprise you!”