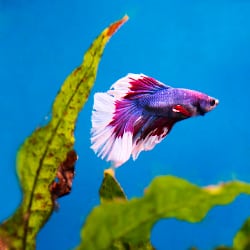 Goldfish and betta fish are among the most popular pet fish available today. Both species are enjoyed by fish-keepers around the world due to their beautiful shapes, varied colors and interesting behaviors. So it’s easy to see why people often think about keeping goldfish and betta fish together.

But is it a good idea?

Unfortunately, there’s a lot of conflicting advice out there. Some people will tell you goldfish and betta fish can live together, while others will say it’s a definite no. You’ll need to do your research and make up your own mind, of course, but this article gives what we believe is the most accurate answer.

The truth about whether goldfish and betta fish can live together!

Though some websites suggest otherwise, we strongly believe that goldfish and betta fish are very bad tank mates.

1. Both goldfish and betta fish like to nip fins

So, you have two fish who like to nip fins, both of whom have long fins just begging to be nipped! In almost all cases, you’re going to end up with one fish chasing the other, or both your goldfish and betta fish having a nip at each other.

And it’s important to realise that fin nipping is a serious issue. Not only will having their fins nipped cause a fish to get stressed – which can lead to them getting sick – it can also damage their fins, leading to injuries and infections.

Goldfish will try to eat anything they can fit in their mouths. And that could include your betta fish.

Goldfish grow to be big and they produce a lot of waste. This means they need a large volume of water, and regular water changes, in order to keep ammonia and other harmful chemicals within acceptable levels.

Unfortunately, people often keep goldfish in tanks that are far too small for them – and sometimes add other fish into the tank too – which leads to the water getting polluted.

So while it’s possible for a goldfish and other fish (such as a betta) to live in the same tank without ammonia levels getting dangerously high, we always think it’s worth reminding people of this point.

It can be very difficult to stop two fish from sharing food if they are sharing the same tank. Inevitably, some food will reach the wrong fish, whether directly when you first add it to the tank, or later when the fish is searching for leftovers hidden in the substrate.

Goldfish and betta fish will both attempt to eat pretty much anything, so you can be sure that if they share a tank, they are going to end up sharing food too. Unfortunately, when it comes to food, their needs are quite different.

Betta fish are carnivores that benefit from high-protein diets, whereas goldfish are omnivores, which don’t need as much protein. If a goldfish eats lots of betta food, it will end up with a diet that is too protein rich, and this can lead to serious health problems.

6. Keeping goldfish and betta fish together is unnecessary

Technically, it may be possible for some goldfish and some betta fish to get used to living in the same tank. We’ve seen tanks, photos and videos where individual fish appear to be getting along just fine.

But as explained above, it can also go very badly wrong, with fins being nipped, one fish trying to eat the other, one fish being forced to tolerate unsuitable temperatures, poor water quality and incompatible diets. So why take the risk?

A single male betta fish doesn’t need a huge tank, so if you want to keep both goldfish and betta fish, why not just buy your betta a separate tank of their own, rather than forcing them to try to get along with your goldfish?

Do betta fish get along with goldfish?

As explained above, it’s certainly possible for some betta fish to get along with some goldfish, but that doesn’t mean they make good tank mates. Not only do they need different tank conditions and different diets, you may also find that the individual fish you choose don’t get along with each other.

In terms of betta fish not getting along with goldfish, the biggest problem you are highly likely to face is fin nipping. As both species like to nip fins, and both have long flowing fins to nip, it’s almost inevitable that at least one fish will try to nip the other at some point.

Goldfish can eat betta food in small amounts, but it’s not a good idea for them to eat lots of betta food all of the time.

As betta fish are carnivores, their bodies are adapted to a protein-rich diet. For this reason, betta food is specially developed to contain lots of protein. This is great for bettas, but not so good for goldfish!

Goldfish are omnivores and their food does not need to be as protein-rich as a betta fish diet. Unfortunately, eating lots of betta food, and consuming too much protein in the process, can cause serious health problems for goldfish.

We’re often asked whether betta fish can eat goldfish flakes, and other goldfish foods. The answer is yes, they can, but it’s not ideal.

As they are carnivores, betta fish need a high protein diet. In the wild, they often eat insects and insect larvae, and in the aquarium they will enjoy protein-rich foods such as freeze-dried bloodworm or brine shrimp.

Goldfish don’t need as much protein, so their foods – such as flakes and pellets – tend to be lower in protein and higher in carbohydrates. This is great for goldfish, but not so good for betta fish! As long as your betta is getting enough protein then goldfish food won’t do them any harm, but it’s not great for them either.

You’ll also want to bear in mind that goldfish and betta fish have very different sized mouths. A pellet that is tiny for a goldfish could be a choking hazard for a betta fish.

Can you put a goldfish in a betta tank?

The answer to the question “can you put a goldfish in a betta tank” is no. But the reason why depends on exactly what you mean by the question.

If you mean, “can goldfish and betta fish live together” then the answer is no for the reason we list above.

If you mean, “can you put a goldfish in a small tank advertised as ‘a betta tank’ by the pet store” then the answer is still no, because goldfish will need much more room.

So-called “betta tanks” are often extremely small, like the one pictured below. We wouldn’t even keep a betta in a tank that size, never mind goldfish, which grow to be much larger.

For the people asking us this.. we’re not entirely sure whether you mean goldfish the animal or the crackers, but either way, the answer is no!

But perhaps you’re wondering whether betta fish eat goldfish crackers?! If so, the answer is still no! Betta fish are carnivores and, while they will eat or try to eat other things (such as vegetables), goldfish crackers would definitely not be good for them!