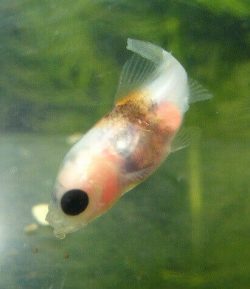 Caring for goldfish can be very rewarding. You set up their tank, make sure their water is just right , choose what food they eat, and watch your goldfish grow and play.

But there is something even more rewarding than looking after a goldfish you bought from the pet store. How about raising a goldfish all the way from birth to adulthood?

In this guide to baby goldfish, we look at how goldfish babies are born, how they grow, and – most importantly – how you should care for them.

Contents hide
1 How do goldfish have babies?
2 What do the babies look like?
3 What color are the babies and how does this change?
4 Baby goldfish growth rate
5 Caring for baby goldfish
5.1 Tank
5.2 Temperature
5.3 Food
5.4 Death
6 What are baby goldfish called?

How do goldfish have babies?

Before baby goldfish can be born, two sexually mature adult male and female goldfish must mate.

Goldfish only mate at specific times and under specific conditions. For example, the temperature of the tank is important.

If you’re not sure how to encourage your goldfish to mate, or if they are ready, check out our guide to breeding goldfish to learn more.

About 4 days later, the eggs that were successfully fertilized and survive – i.e. don’t get eaten by the adult goldfish or sucked into your filter! – will hatch.

Your goldfish babies have been born!

Once your goldfish eggs hatch, you’ll need to look closely to find the tiny goldfish babies.

For the first 4 days or so they will be stuck to the leaves of your plants, so look carefully. Where you previously just saw eggs, you should now see tiny black baby goldfish with their yolk sacs attached.

After about 3 more days, your goldfish will be able to swim around freely.

What color are the babies and how does this change?

As they grow, they develop a brown color, perhaps with hints of silver. Some areas of their body are almost see-through.

It can take up to two years for a goldfish to fully develop its color.

And even then, goldfish can continue to change color throughout their lives.

Of course, baby goldfish don’t stay so tiny and black in color for long.

One of the joys of breeding goldfish is that you get to see the babies grow and develop over time.

Once your baby goldfish reach the free-swimming stage, their bodies will be around 5mm long. They will have a very small stubby tail, pectoral fins (on their sides) and a fin on their back too.

Over the next week, your baby goldfish will grow by almost 40%. Their caudal fin (the tail fin) will develop a lot during this stage of growth.

The following week – the third week after hatching – your goldfish will continue to grow quickly. You’ll also notice their dorsal fin (the fin on their back) becoming more defined.

By the fourth week, the dorsal fin will be well developed.

By the fifth week, all of your fish’s fins will be well developed and they will have scales.

From week six onward, your fish is essentially “complete”. Like a miniature version of an adult goldfish. From now on, it’s all about growing in size and weight.

To stop your adult fish from eating their own eggs, you should remove your goldfish eggs from your main tank as soon as they have been fertilized by the male.

Removing the eggs could be as simple as transferring your spawning mop, if you used one. Or you may have to gently siphon the eggs off things like plants and decorations.

Place the eggs into a small tank – perhaps 3 to 5 gallons in size – with around six inches of water.

Add a small sponge filter to the tank. Don’t add a large, powerful box filter, as the babies will very likely get sucked inside!

Your baby goldfish should stay in smaller tanks – separate to the adult fish – until they meet two important conditions:

Only once these conditions are met should you add babies to an adult tank.

We recommend maintaining a temperature between 70-75oF (21-24oC) in your baby goldfish tank. This temperature is warm enough to encourage rapid growth, but without being too hot for your fish.

It’s very important to avoid any sudden changes in temperature. A sudden drop to a cold temperature will stress your fish, which could cause them to get sick or even die.

For the few first days after hatching, you should not feed your baby goldfish at all.

While this might seem odd, it’s because the goldfish arrive well-prepared with their own packed lunchbox!

Baby goldfish hatch with a “yolk sac” attached to their bodies. This pouch contains all the food they need for the first few days.

Take some hard-boiled egg yolk and soak it in water. Give it a good shake, then add to your baby goldfish tank in small quantities.

You may also wish to try crushed brine shrimp and baby fish food.

Remove any food that is left uneaten so that it doesn’t pollute your tank.

The second month on

Your fish should now be able to eat the same foods you feed to your adult goldfish.

Just be sure to crush up the food if necessary. You need to make sure the pieces aren’t too big for the babies mouths!

We should add that – no matter how well you care for the babies – you should be prepared for lots of them to die.

The reason that goldfish lay so many eggs, and that so many babies hatch, is that only a small percentage make it to adulthood. They need to have lots of babies to ensure that some survive.

If you manage to keep 20% or more of your baby goldfish alive to give away to other people, or to move to your adult tank, you’ve done very well.

What are baby goldfish called?

Throughout this article, we’ve referred to the little new members of your goldfish family as “babies”. However, this isn’t the technical term for baby goldfish.

When they first hatch from their eggs, baby goldfish are called larvae. They carry a yolk sac with them for food. This periods lasts for two to three days.

The baby goldfish then lose their yolk sacs and become capable of feeding themselves. Once they reach this stage, the babies are called Fry.

Once baby goldfish develop scales and have fully formed fins, they are known as juveniles. This phase lasts until the goldfish is a sexually mature adult fish.

12 thoughts on “Baby Goldfish: How to take care of goldfish babies”