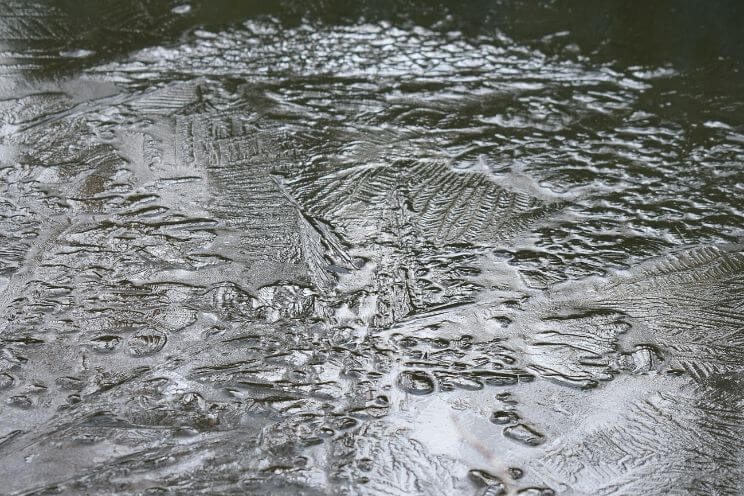 During winter time, you may notice shallow pools, ponds and streams freeze over. Some bodies of water can even freeze completely, and can even trap fish, freezing them alive!

But can they survive this process, and how do fish cope with being frozen?

Are you worried about your fish over winter? Tell us in the comments
Contents hide
1 Do fish freeze in winter?
1.1 Can fish live after being frozen?
2 How do fish not freeze in winter?
2.1 How do fish stay warm?
3 Where do fish go when it freezes outside?
4 How can I stop my pond from freezing over?
5 Should I allow my pond to freeze over winter?
6 Should I heat up my pond during winter?
7 Can my pond plants survive freezing in winter?

Do fish freeze in winter?

Naturally, no, the fish themselves should not freeze; however, their habitat can freeze over along its surface and many fish species around the world will live under sheets of ice for extended periods of time in the year.

Coldwater fish can enter a state called torpor, where they slow down their bodily processes and conserve energy, during times of harsh weather and scarcity of food.

Can fish live after being frozen?

If a fish gets completely frozen, to the point where ice forms on its body, it will die.

As far as we know, there aren’t any well documented fish that have been able to, or can survive the process of completely freezing.

There are, however, some species of freshwater turtle, insects and a type of frog, called the Alaskan wood frog.

These animals can completely freeze and are able to survive, but this is because their bodies have evolved a natural antifreeze, which prevents ice from puncturing their organs!

In short, your pond fish at home will die if their bodies freeze.

How do fish not freeze in winter?

During winter, if your pond is the correct depth, then only the top layer should freeze.

If the pond is too exposed and is allowed to completely freeze as the cold hits it from all sides, then the fish cannot escape the ice.

But, how do they not freeze to death when ice sheets form over the top of the pond?

Fish are cold blooded animals, which means they cannot regulate their body temperature on their own, and rely on the temperature of the environment to heat up or cool down their bodies.

Most animals are cold blooded, with only birds and mammals having warm blood.

Fish however, are better than every other animal group at absorbing and maintaining the heat they trap from the water around them.

Many fish species are superb at absorbing heat from the water, and some species even have a body temperature which is significantly warmer than the water around them.

Fish have scales and a protective slime coating too, which helps insulate their bodies better.

Fish will also naturally stay around the bottom of the pond during winter too, as a way to prevent themselves from getting caught in the frost.

How do fish stay warm?

Fish don’t need to stay ‘warm’, they regulate their temperature using the temperature of the environment and can absorb heat well.

Where do fish go when it freezes outside?

When the weather gets harsh and it begins to freeze, fish in the wild will generally move downstream, into deeper waters.

Some brackish fish even migrate out to sea where they will spend half of the year living as a marine animal.

In other parts of the world where the seasons are split up into dry and raining seasons, some fish, like lungfish, will bury themselves, preserving their bodies until the rain returns.

In some areas, fish are trapped in dry watering holes and muddy pools, where they mostly die off, but some survive for when the rains return. This is the case for many pleco and catfish species from Peru, which are evolved to deal with low oxygen and have tough scales to defend themselves from predators.

Goldfish in question, will seek out deeper waters, where the risk of freezing and predation is reduced and will stick around the bed of the lake or pond.

They will reduce their metabolism and slow down their energy consumption and will lie dormant until temperatures rise again.

How can I stop my pond from freezing over?

Depending on your location, you may have to take different measures to ensure that your pond doesn’t freeze; for some, this may be more extreme than others.

In most places, leaving your filter running over winter will keep the water moving, and will prevent it from freezing over.

However, if you live in an area where running water often freezes, at very low sub-zero temperatures, then we recommend leaving your filter off so it does not puncture the pipework.

In cases like this, we recommend using a de-icer heater, to keep the pond from completely freezing over.

Should I allow my pond to freeze over winter?

Allowing a pond to freeze is a natural process – of course wild ponds, rivers and lakes will freeze during winter and fish still manage to survive there.

However, everyone has a different situation and while it may be good for some, it may be bad for others, to allow their ponds to freeze.

All ponds, we recommend, should be at least 3ft deep if possible – this is because the depth allows the fish to escape freezing temperatures.

If your pond does freeze fully during winter, or you suspect it isn’t deep enough, we suggest taking additional measures to insulate it, or to take the pond and or fish indoors during harsh weather.

If your pond is deep enough to prevent it from fully freezing, then you have two options, you can either:

Both of these options have benefits and disbenefits.

Pros of turning off your filter in winter time:

Cons of turning off your filter in winter time:

Pros of leaving your filter on in winter:

Cons of leaving your filter on in winter:

Whether you let your pond freeze over or not is really down to your individual situation and preference.

However, bear in mind the risks of either leaving it on or turning it off.

As mentioned, if you live in a freezing cold area and regularly stoop below -10 degrees, then your pipes run the risk of freezing up and bursting.

If you do let your pond fully freeze over, then you need to make sure to either break the surface to allow some air to pass through, or install a de ice heater to maintain a gap in the ice, where gaseous exchange can occur.

Are you worried about your fish over winter? Tell us in the comments

Should I heat up my pond during winter?

If your pond has been out over winter, is frozen over, and the fish are still in it, then do not heat it up or try to melt the ice!

This will shock the fish and can kill them very quickly! During cold times, fish will enter torpor and become dormant – they can only be brought out of this state gradually, over the course of days or weeks.

As far as heating a pond during winter, it is only useful for certain scenarios, such as just melting a little hole in the ice to allow oxygen to flow through.

Other scenarios that involve heating a pond over winter are usually last resort efforts, such as being forced to move fish out during winter, if they need rehoming or a tank breaks.

During times like this, it is acceptable to heat a pond, but take it slowly and steadily.

Your goal is to slowly introduce the fish to cold weather, so every day or so, decrease the temperature by 1 degree, until the heater is no longer needed and the fish are acclimated.

The process of acclimating fish during winter is long, and could take weeks! We only recommend it if it’s the absolute last resort effort.

Can my pond plants survive freezing in winter?

This is heavily dependent on the species of plant you have, and whether or not its life cycle includes entering a dormant state over winter.

As long as the plants you keep are native to your area, or at least are from an area with a similar climate, then they should be fine to be left out over winter, even if they freeze.