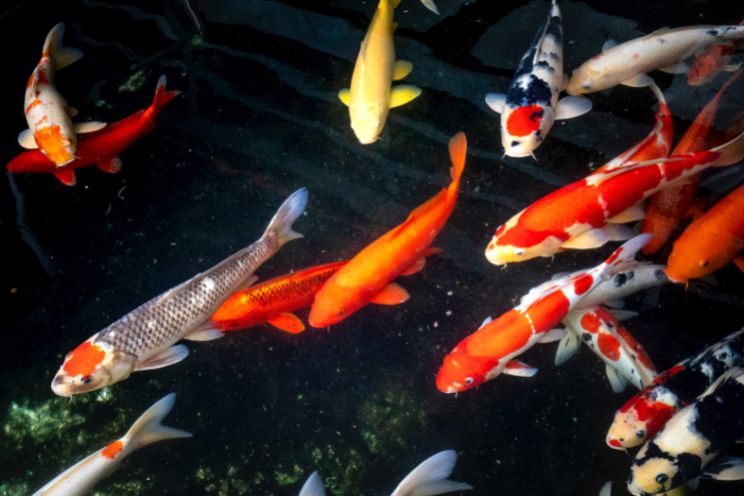 The most common pairing of pond fish is probably goldfish with koi carp.

Both of these fish are very similar, but they do have some subtle differences that you may need to know before pairing them with your goldies.

Can Koi fish and Goldfish live in the same pond?

Yes! Koi and goldfish can live in the same pond, but there are limitations to this.

Koi are very powerful and large fish, their bodies are streamlined, they have strong thick finnage and very tough muscles.

This means that Koi are fierce competition whenever it comes to physical abilities and places where this is needed, Koi will outcompete most goldfish.

An example of this is feeding time – Koi will always be the first ones to get to food because of their size, boisterous nature and speed.

Comets and Shubunkins will get their fair share of food, as they are nimble enough to reach it in time, they are also powerful swimmers and can hold their own against big koi.

Unlike fancy goldfish, which we definitely do not recommend you keep with Koi carp, as they will be outcompeted for food due to their poor swimming capabilities, and could be bullied easily.

Are Koi aggressive to Goldfish?

Koi are not inherently aggressive towards other fish – they can however, be boisterous and may chase other fish or bump into other fish with their large bodies, which could cause harm, especially to those smaller goldfish.

Koi also have the same tendencies as goldfish in their eating habits. If you house them with tiny goldfish, small enough to fit in their mouths, the koi will eat them.

Much like goldfish, koi are usually not bullies, but there are cases where they can pick on a particular fish in the pond.

This however, is usually caused when the fish are uncomfortable. If your fish are being aggressive, test the water quality, check the temperature, try doing a water change or feeding more.

You could also provide more cover or space for the fish, so they can avoid each other.

Poor water quality or lack of space makes fish stressed, and this stress can come out in aggression in goldfish and koi.

A happy fish is usually a peaceful one, so keep on top of that water quality!

Having issues with your goldfish? Let us know!

What fish can live with Goldfish and Koi?

We have a more extensive list of what fish can live with goldfish in our pond mates guide!

The fish we mention in this page can also live with koi just fine, we go over each one in more detail there.

To run by them quickly here, they are:

Differences between Goldfish and Koi

Koi and goldfish are both carp, they are close cousins and share a similar ancestor – because of this, they behave and look very much the same, however, there are some key differences that set them apart.

The most notable differences are:

Koi have barbels on their mouth – they look like two little worms coming off the sides of the lip. These are used to sense things in the substrate and goldfish do not have these.

Koi are much larger than goldfish; more than 2x larger when full grown.

Koi also have different shaped scales to goldfish. They are more round and much larger. Koi also tend to have a “spine” going down their back, which is a series of stand out scales running down the body of the fish, which goldfish do not have.

Koi have broader heads and bodies, whereas goldfish have more narrow and pointed heads.

Koi tend to have shorter, thicker fins too.

Koi are much larger than most goldfish, averaging at around 30” long, they are more than double the size of your average comet.

Ghost koi, (another variety of koi breed) can get very large around 36” or more in some cases!

Goldfish can also get very large, and some can grow larger than many koi, but this is not the norm, and on average, koi are double the size of most goldfish.

Both fish tend to be more relaxed in cooler temperatures – the warmer they are, the more active they become and the more irritable they seem.

If either fish show signs of bullying, it is usually because something is wrong with the environment.

Goldfish and koi both breed in the same way, they are “egg scatterers” – this means that they reproduce externally, the eggs and sperm meet outside of the fish’s bodies.

It starts when the fish are in great health, and something triggers them to enter breeding condition (this is usually a drop in temperature). The females will then release hormones into the water, which bring chasing behaviours out in the males.

In goldfish, the males will develop bumpy white spots on their pectoral fins and gill plates.

They will then chase the females around at high speeds, rubbing against them, aiming to push the eggs out, at which the same time, they release their sperm over the eggs to fertilise them.

Do goldfish and koi eat eggs?

Both goldfish and koi after spawning, and even during spawning, will then eat many of the eggs.

Fish will eat their eggs as they are high in nutrients, so they can claim back on some energy they lost to produce them. Fish will normally do this if they are hungry or stressed, and spawning is stressful for carp.

Eating the eggs also works as a sort of population control, as they lay their eggs in the thousands.

Some eggs survive though and eventually hatch into koi and young goldfish.

However, fish are more likely to eat another species of fish eggs, rather than their own, and this happens often when goldfish and koi are housed together.

In rare cases, goldfish and koi can actually interbreed and produce a mixed offspring.

Can Koi and Goldfish eat the same food?

They can, goldfish and koi both have very similar diets!

However, many koi foods are very high in protein, as they aim to put on maximum growth for shows and exhibitions.

These foods, known as “growth foods” shouldnt be the fishes staple diet, carp need a more fibre and vegetable based diet, as too much protein can be too much workload on their digestive system.

Goldfish often get bloated and dropsy because they have too much protein in their diets, and too many dry foods which are filled with lots of air.

Pros and Cons of keeping Koi and Goldfish together

Whether or not you keep goldfish and koi together is entirely up to you.

However, your pond situation may not be ideal for keeping both together, so we will go over some pros and cons of keeping the two together to help you make your mind:

✅ Both fish can get along peacefully

✅ Both have similar care and dietary requirements

✅ Both look nice together

✅ Both are very personable and tame fish

✅ Both are good at cleaning up food and eating algae

✅ Both can live outdoors year round

❌ Koi can be very competitive over food