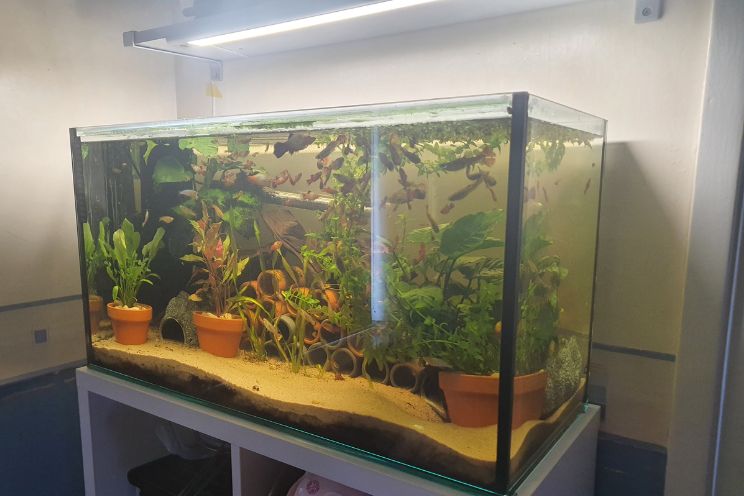 You may own a goldfish and be wondering if you could house it with tropical fish, or you may own a tropical tank and like the idea of having goldfish swimming around with your community fish.

But is this possible, should it be done, and are there any risks involved when keeping goldfish in a tropical tank?

Do you keep goldfish with tropicals?
Contents hide
1 Can goldfish live in a heated tank?
2 What do high temperatures do to goldfish?
2.1 Biology in warmer water
2.2 Behaviour in warmer water
2.3 Risks of keeping goldfish in a tropical tank
3 Benefits of keeping goldfish in tropical tank
3.1 Can tropical fish be kept with goldfish?
4 Fish to avoid keeping with goldfish
4.1 Cichlids
4.2 Plecostomus and other biofilm feeders
4.3 Small dither fish
4.4 Oddballs
5 Can goldfish survive in a tropical tank?

Can goldfish live in a heated tank?

Goldfish can definitely live in a heated aquarium – they are suited to both warm and cold weather.

However, goldfish are better suited to the cold than they are to tropical temperatures, and they have their limits.

While goldfish can live at these high temperatures, it changes their metabolism, behaviour and reduces their lifespan. It can create a few problems for the goldfish and the other tank inhabitants.

What do high temperatures do to goldfish?

All fish have a metabolism that is influenced by the temperature of the water around them.

Having a faster metabolism changes goldfish behaviour and body functions in a number of ways.

The first thing that changes is the goldfish begin to consume energy much faster and will burn off fat quickly. You may notice your goldfish appear slimmer when kept in warmer waters and this is true, they will lose weight faster.

This means that your goldfish will want to eat more and will require extra feeding in a tropical tank.

The fish’s bodily processes will all speed up, meaning your fish will digest food quicker, go to the bathroom a lot more often and move around much more. They will even be quicker thinking and much more alert too.

The increased energy use also means that your goldfish will grow much faster in warmer water and can reach monstrous sizes in a very short amount of time, especially if kept at those higher temps around 26C – 27C or 78F – 82F.

The increased growth will quicken the lifespan of the fish too, allowing it to reach sexual maturity much quicker, but the fish will not live as long.

Due to their changes in physiology, the goldfish’s behaviour is often also affected by warm temperatures.

Goldfish are usually placid animals; they are peaceful in nature, docile and ambivalent of things around them.

However, in warmer temperatures, this can change and what was once a peaceful fish can become aggressive, boisterous, destructive and even seem mean spirited.

All fish can become aggressive when conditions are wrong or if they feel uncomfortable, and this is exactly the case with goldfish.

If kept above 26C / 78F for a long period, goldfish can become irritable and much like us humans when we are stressed, they can become short tempered and impatient.

In a tropical tank setting, it is not uncommon to see your goldfish fin nipping, headbutting or even grabbing hold of their fellow tankmates.

The fish may also glass surf as a sign of distress and will uproot plants much more frequently if they are too warm for too long.

Their increased hunger also results in them being more opportunistic, often tearing up and eating plantlife, eating small animals like baby snails, eggs, shrimp and even smaller fish!

Risks of keeping goldfish in a tropical tank

Goldfish and Prussian Carp are fish of the river – this means they are accustomed to fast moving, oxygen rich waters with low organic nutrients but high mineral content from the rocks and mountains.

This water is cold throughout most of the year, which helps it better absorb oxygen and maintain an alkali pH above 7.0.

Naturally as water becomes warmer, it cannot hold as much oxygen and so more Co2 dissolves into the water body, and this causes the pH to drop.

As the pH lowers, the water becomes more acidic, and means it is even harder again for oxygen to dissolve.

Low pH, low oxygen and warm water are the three things goldfish aren’t adapted to be resistant against, and so overtime, exposure to these conditions causes irritation, stress and discomfort.

The lower oxygen is perhaps of most threat to the goldfish’s health when keeping them in a heated tank. We always recommend adding an airstone, especially if you keep your tank above average room temperature.

The increase in metabolism also means your goldfish will need to be fed more often, which means more waste and more ammonia.

Keep testing your water and keep on top of weekly water changes to avoid a surge in ammonia and nitrites.

This hunger may also push your goldfish to become more boisterous, more aggressive and more destructive towards plants and their tankmates, so keep a close eye on behaviour.

As mentioned, the warm water also speeds up the lifespan of goldfish, meaning they may end up outgrowing your tank much quicker if kept warm.

Do you keep goldfish in a tropical tank?

Despite the downsides of keeping goldfish at warmer temperatures, there are actually some hidden benefits to it. One of these is the way it affects digestion.

In warmer temperatures, fish find protein easier to digest and their bowels will pass food much faster, reducing the risk of congestion and bloat.

Fancy goldfish actually do a lot better in warmer temperatures because of this, since it assists their cramped digestive system in processing bowel movements.

The increased growth also helps young goldfish out a lot, as it can get them out of the fry stage quickly which is when they are most vulnerable and when mortality is high.

Can tropical fish be kept with goldfish?

Yes, absolutely, many tropical fish can live with goldfish – some do particularly well with them, but others do not.

Recognising which fish do better with them is key to keeping a successful community tank.

We actually have a more in depth guide on this, with a list of which fish make good community tank mates for goldfish.

These fish are ideal as they are not easy targets for goldfish to bully, are peaceful, enjoy similar pH and hardness and take similar food.

Other good tank mates for goldfish are bottom feeders. Loaches and small Cory Catfish are great as they occupy a different area, scavenging off the floor of the tank and are usually either armoured or hard to pursue, making them very hard to bully.

Fish to avoid keeping with goldfish

However, while some of these fish may be able to cohabitate with goldfish under certain conditions, we typically recommend against it, unless you are experienced.

Cichlids are found all around the world in tropical climates. They are very successful freshwater fish and part of this success comes from their aggressive nature and defensive capabilities.

The only Cichlids we can really sort of recommend with goldfish are Kribensis, although you may even find problems with these guys too, especially if the Cichlids manage to spawn.

The parents will become very protective over their young and will aim to attack or even kill a goldfish that gets too close.

All cichlids have this behaviour hardwired into them and all are territorial fish, so we cannot recommend them to live with your goldfish.

South American Cichlids, although sometimes less aggressive than their central American and African cousins, also require different water parameters, which goldfish do not like.

Plecostomus and other biofilm feeders

Although often recommended as a good tank mate for goldfish often under the title of “cleaner fish”, they actually do not make amazing tank mates for goldfish for a few reasons.

The main reason we try not to suggest housing Plecos with goldfish is because plecos primarily feed on biofilm, which is a slime-like bacteria that grows on all the surfaces in your tank.

Goldfish, just like all other fish, produce a thick waxy slime coating to protect themselves from disease. This slime coating is very high in nutrients for fish that feed on biofilm and so plecs will find themselves seeking it out as a source of nutrition.

While goldfish are sleeping, Plecos will sometimes eat this slime coating directly from the fish’s skin and this will make your goldfish highly vulnerable to disease and infection.

The reason this happens to goldfish more than other fish is because they usually sleep close to the ground and have a wide surface area on their flanks, which the plecos can rasp on.

Plecos are also no better at cleaning than goldfish already are and in fact, produce a very high amount of waste similar to goldfish, only adding to the amount of ammonia production in your tank and potentially overloading your filtration.

As well as this, plecos are heavily armoured Catfish, often being equipped with spikes which they can damage scavenging goldfish with.

While many people keep Plecos with goldfish just fine, if you are a beginner, we suggest against it as it is not worth the risk and added workload on your tanks filtration.

As we have mentioned, goldfish are not unfamiliar to eating other fish smaller than themselves, even other goldfish!

Any fish small enough to fit in their mouth, they will try to swallow, so unless you are okay with a few fish going missing, then we suggest against housing small fish with goldies.

Things like Mountain Minnows, Zebra Danios, Rasboras, small Tetras and so on, may be okay to house with smaller goldfish, but once the goldfish mature, they will eat them.

While again, these small fast moving fish can be kept with goldfish for a long time by many people with no issue, they are always under threat of being eaten.

Bichirs, large Catfish, predatory fish and Labyrinth fishes all make poor tank mates for goldfish, because they are either aggressive or become large predators as they get older.

Labyrinth fish, which is the family containing Bettas and Gourami, are often territorial fish and will display aggression to goldfish.

On the flip side, they also usually tend to have long extremities on their fins which are targeted by aggressive goldfish.

Bichirs, Catfishes and other predatory Oddballs like Lungfish or Arowana will absolutely swallow your goldfish whole once they mature and are definitely not ideal candidates for your goldfish/tropical community tank.

Can goldfish survive in a tropical tank?

Despite the downsides of keeping goldfish in a tropical tank, it can definitely be done and is sometimes beneficial to the goldfish, especially for those fancy breeds who struggle with digestion.

The main things to take away are as follows:

With this, we come to the conclusion that goldfish can live in a tropical tank, factoring both its drawbacks and benefits.

However, a goldfish will always prefer cooler temperatures, where it is naturally most comfortable.