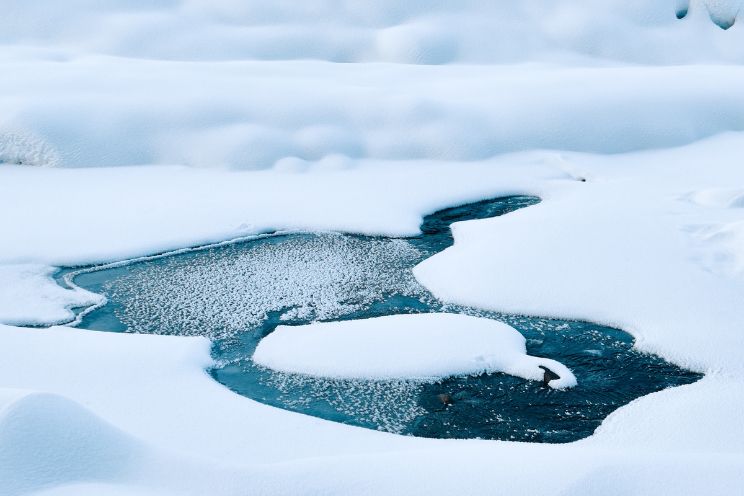 For us, winter may seem like a very tough time. There is little food, it gets dangerously cold, the weather is dangerous and it is dark all the time.

If we find it hard to survive, then how can our goldfish friends survive, especially when they are trapped in water?

In this guide, we will demonstrate some key reasons as to how goldfish survive during winter and whether or not they need assistance.

Yes, goldfish can survive a wide variety of temperature ranges that would easily kill any mammal or bird. This is because they are adapted to surviving harsh winters by slowing down their body processes.

This process is slow however, it takes days or even weeks for goldfish to acclimate to freezing temperatures, fast temperature fluctuations will kill goldfish!

We would also like to stress the wording of this, goldfish can survive “freezing temperatures”, not “being frozen” – these are two very different things.

Should I move my goldfish inside during winter?

Depending on your situation, this answer may differ, but generally speaking, if your pond is 3ft deep or more, then your fish will be fine to stay outside over winter.

In fact, entering a winter dormancy is part of a goldfish’s natural life cycle, allowing your fish to go into hibernation actually increases their lifespan!

Hibernation is good for their growth and muscle tone too, as they will better metabolise nutrients in colder weather.

However, very young or very old goldfish may struggle during winter time, as the transition between warm to freezing cold to warm again can be too much stress on their bodies, so you may want to take geriatric or juvenile goldfish inside.

Additionally, any physically impaired goldfish, or fish with fancy extremities like the many ballooned breeds, may also want to be taken inside during winter, as they also are at risk during cold spells and sub zero temperature drops.

Do you move your goldfish inside over winter? Let us know in the comments below!

How do goldfish survive the winter?

In the wild, when winter strikes, many fish will naturally move downstream to deeper waters, where the ice cannot reach them.

Here, they will live throughout late autumn, winter and early spring. During this time, the fish are heavily vulnerable to predation from land animals, however, many predatory fish will now be passive during this time as they too are in a docile state and are not looking for food.

This is one of the reasons why some newt and fish species will only breed in freezing temperatures, as the risk of the young and eggs being eaten are reduced significantly.

Goldfish, as well as their relatives both wild and captive, will seek deeper water during winter; you will see them sticking near the bottom of the pond and they will also enter a dormant state called torpor like many other coldwater fish.

During this time, they conserve energy as they will not eat much and have a hard time keeping their body temperature up.

What do wild goldfish eat in winter?

In a wild setting, goldfish will generally not eat much if at all in winter or in late autumn. They may pick at algae or dead leaves during warmer days, but will not really feel hungry during this time, as their digestive system does not work below 5C / 41F.

During spring however, a bounty of algae will grow and droves of mosquitoes, midge larvae and many other insects will come to spawn in the ponds and lakes, which are usually one of the first meals the goldfish will get.

However, during the beginning and ending of the cold months, goldfish will primarily consume algae and blanketweed, vegetation accounts for most of a goldfish’s diet anyway, but during the cold, foods containing less protein are more desirable to them.

Why don’t goldfish eat during winter?

The reason for this is because goldfish lack an acidic stomach; instead, their digestive tract is composed of just intestines, where the passing food must ferment and be broken down by bacteria.

Goldfish rely entirely on this beneficial gut bacteria in order to digest and absorb nutrients from food.

At temperatures below 10C / 50F, this bacteria slows down and finds it difficult to digest protein – this is why we feed wheat germ during autumn, as it contains less protein, so it is easy for the goldfish to digest.

Below 5C / 41F, the gut bacteria completely stops working and becomes dormant. The goldfish then cannot digest food at all and any food they eat now will sit in their intestine and rot, unless the temperature rises during the day, enough for them to digest it.

Knowing what temperature your pond is and when to feed is key!

How long can goldfish not eat for in winter?

Goldfish can go without food for a surprisingly long time – their extremely low metabolic rate during freezing temperatures allows them to go for months on end without eating a single scrap of food!

As their body processes slow down just enough to keep them alive over winter, they spend very minimal energy reserves on staying alive.

In comparison to us humans who are warm blooded, we spend about 60%+ of our energy just on maintaining our body temperature, meaning we need to eat every day, especially during winter where more energy is needed to maintain a healthy core body temperature.

Fish work in the reverse to this and in the cold less energy is used, whereas in warmer temperatures, the metabolic rate speeds up and more energy is used.

In the dead of summer heat, goldfish will become very active and will burn energy so quickly, they can lose large percentages of body fat within a few days or weeks if they do not eat enough.

What can I do to help my goldfish over the winter?

Winterizing your pond is a good way to start preparing your fish for the cold months. If your setup is not adequate for keeping fish out during freezing weather, then you should be taking them indoors.

Aside from your usual maintenance of the filter and equipment, there isn’t much else you can do regarding the fish, if you have a good setup.

Make sure that the pond does not fully freeze over, preventing gaseous exchange between the pond and the surrounding atmosphere.

You can also put a cover over the pond to defend against cold wind, predators and any other invasive problems during winter time that oppose an extra risk.

Do you move your goldfish inside over winter? Let us know in the comments below!

What is too cold for goldfish?

While goldfish can survive having their home completely frozen over for several months in the year, they do have their limits.

As mentioned earlier, goldfish can survive freezing temperatures, but they cannot survive being completely frozen.

In most cases, as long as the water body is deeper than 3ft, goldfish can escape freezing to death by submerging themselves deeper to the bed of the pond or lake.

However, if the pond is too shallow and the pondfully freezes, then the goldfish will most certainly die.

At temperatures below -45 to -50 degrees, water absolutely must freeze, and so unless the pond is very deep, the fish will have nowhere to go and will die.

Goldfish are not evolved to suit temperatures this low for really extended periods of time, especially if they are trapped in a small water body.