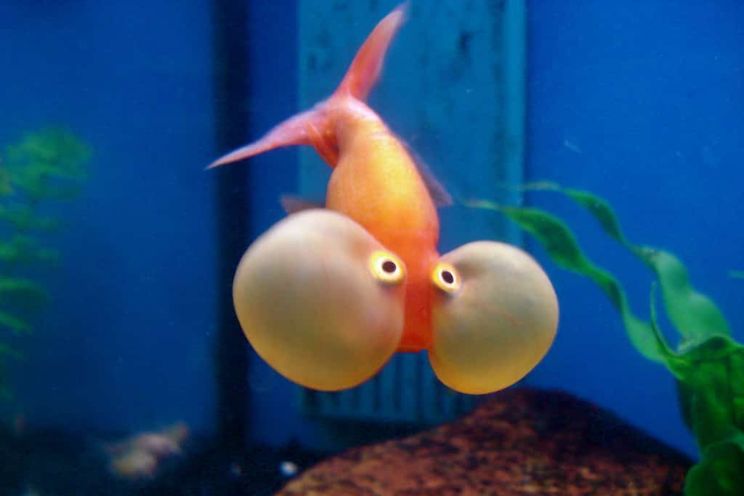 Bubble Eye goldfish are unusual, fragile goldfish that can make a fascinating addition to a coldwater aquarium.

The Bubble Eye goldfish that you see for sale in your local fish store or pet shop are juveniles of just an inch or so long. But don’t be fooled! That tiny fish will quickly grow to its full size, provided you offer your pet a correct, high-quality diet and provide optimum water conditions.

So, to begin with, although you can get away with keeping a couple of Bubble Eye goldfish in a 10-gallon setup, you’ll soon need to upgrade that.

For that reason, we recommend that you start with a 20-US gallon (17 UK) aquarium. For every additional Bubble Eye goldfish you want to keep, we recommend you add a further 10 gallons to your tank capacity.

Thanks to their weird upturned eyes and lack of a dorsal fin, Bubble Eye goldfish are very slow, clumsy swimmers. So, a rectangular tank is the best option for these strange-looking fish.

That tank shape offers lots of open swimming area, plenty of surface area for good gaseous exchange, and the shallow water depth makes it easy for the fish to swim to the surface to feed.

Although Bubble Eye goldfish don’t jump, juveniles whose eyes haven’t fully developed have been known to leap to freedom when startled, so we recommend a tank with a lid or cover slide.

A covered tank is also less likely to be polluted by dust, and evaporation is less of a problem.

Goldfish bowls are not at all suitable for Bubble Eye goldfish!

As kids, many of us kept a goldfish in a traditional bowl. However, it’s now recognized as cruel to keep fish in a goldfish bowl.

A goldfish bowl is far too small for a goldfish of any variety, and the surface area offered is insufficient for effective gaseous exchange. That leaves the fish without enough dissolved oxygen in the water, potentially causing stress and associated health problems.

Many people view the bubble eye goldfish breed to be cruel, as they are man made and bred purely for aesthetics. They are prone to injury and infection, which can often lead to blindness or early death.

They are also constantly at risk as the ‘bubble’ sacs under their eyes can easily burst if caught on something within a tank, or damaged by another fish.

Can Bubble Eye goldfish be kept in garden ponds?

Bubble Eye goldfish are generally considered to be too fragile to live in a garden pond.

The fishes’ water-filled bubble eyes are very prone to injury and infection, and their egg-shaped body and lack of dorsal finnage make the Bubble Eye a poor swimmer.

Are Bubble Eye goldfish aggressive toward other fish?

Goldfish, in general, are peaceful, sociable fish that do best when kept in groups with others of the species.

You won’t usually see Bubble Eye goldfish showing any signs of aggression toward other fish. However, male goldfish of all varieties can appear somewhat feisty during spawning, chasing the female fish around the tank.

In the case of Bubble Eye goldfish, injuries to the fish’s eyes can occur. So, if your male Bubble Eye is harassing a female too much, it’s a good idea to remove him to a quarantine tank for the female’s safety until things calm down.

What tank mates do you keep with your Bubble Eye goldfish? Tell us in the comments!

Since Bubble Eye goldfish and other types of Fancies prefer warmer conditions, it is possible to include a few tropical fish species that can tolerate temperate conditions.

These pretty little fish grow to around 1.5 to 2 inches long and thrive when kept in large schools.

One major consideration when choosing tank mates for goldfish is that the fish aren’t small enough to be regarded as a food source. That’s not a problem with minnows, as these critters are much too fast for the slow Bubble Eyes to catch.

The River Murray Rainbowfish is a beautiful, brightly colored fish that does very well in cool water. In fact, cooler conditions of around 70° can enhance this striking fish’s dazzling colours.

Platy fish are pretty livebearers that only reach around 3 inches long so they can do well as companions for Bubble Eye goldfish.

These fish need to be kept in schools of at least five individuals. If you get a good mix of males and females, they will breed readily, providing you with an endless supply of replacements.

However, your Bubble Eye goldfish will likely keep numbers controlled by gobbling up the fry.

Rosy barbs are peaceful schooling fish that enjoy cooler water temperatures, growing to around 6 inches. These barbs need at least a 30-gallon tank, and they must be kept in schools.

Rosies spend most of their day cruising around the central part of the water column, and they won’t hassle the Bubble Eyes.

Scissortail Rasboras are schooling fish that enjoy water temperatures between 72° to 77°F. These fish eat a similar diet as Bubble Eye goldfish, growing to measure around 6 inches in length.

For these fish to thrive, you need to keep a shoal of at least six individuals.

Checkered/chequered barbs are beautiful fish that can fit well in a community goldfish tank. These fish grow to around 2 inches long and need to live in shoals of eight or more.

Thanks to their ability to tolerate water temperatures from 65° to 77°F, Zebra danios are often used as tank mates for goldfish.

These danios are striking black-and-white striped little fish that prefer to live in large schools.

These fish are nocturnal bottom-dwellers that won’t bother your Bubble Eye goldfish. Weather loaches react to changes in barometric pressure, darting around the tank, and become extremely excited when a storm front is on the way.

The main drawback to keeping Dojos is that they need to live in a tank of at least 55 gallons. Your aquarium will also need a tightly fitting lid, as these strange little fish are accomplished climbers that will escape if they can find a suitable hole.

Corydoras catfish can be kept with Bubble Eye goldfish in a peaceful community tank.

Corys are hardy bottom-dwellers that are easy to care for and come in over 100 different varieties, ranging from 1 inch to 3 inches in size. These fish do best when kept in small groups of at least five individuals.

Hillstream loaches are primarily nocturnal, searching the tank for scraps of food that the fish have missed.

The loaches grow to around 3 inches long and prefer cooler water of 68° to 75°F. You won’t see much of these fish, as they like to spend most of their time concealed beneath driftwood, stones and hiding amid dense plants.

As well as the above-mentioned tropical fish species, the best tank mates for your Bubble Eye goldfish are other varieties of Fancies!

Bubble Eye goldfish are fragile fish that are vulnerable to injury because of their protruding, water-filled bubble eyes. So, ideally, you want to keep them with other slow swimmers that won’t hassle the Bubble Eyes.

If you keep Bubble Eye goldfish, you want to avoid slim-bodied varieties of goldfish, such as Shubunkins and Comets.

These types would outcompete the slower Fancies at feeding times and could bump and barge them, resulting in injuries and stress-related diseases.

Very tiny fish and shrimp should be avoided, as the goldfish might eat them.

As well as the tropical fish mentioned earlier in this guide, large species of freshwater shrimp and snails can be good tank mates for Bubble Eye goldfish.

These peaceful creatures are helpful, too, feeding on debris, leftover food, and fish waste and helping to keep the environment clean for the fish.

Fancy goldfish varieties that do well with Bubble Eye goldfish include:

All these varieties of Fancy goldfish can make suitable tank mates for Bubble Eye goldfish.

However, you should ensure that your tank is spacious enough to provide plenty of space for the fish so that bumping and barging don’t occur that could injure the vulnerable Bubble Eyes.

How many fish should Bubble Eye goldfish live with?

Bubble Eye goldfish are sociable creatures that love to live with other fish. As long as you have a large enough tank, you can keep a large community of as many fish as you want.

However, overcrowding is extremely dangerous and harmful to all fish species.

If you try to squeeze too many fish into your tank, they will become stressed. Stress adversely affects the fish’s immune systems, often causing disease outbreaks, poor health, and a failure to thrive.

In addition, you must make sure that all the fish in your community get plenty to eat. If you have some fish that push their way to the front of the queue, you might need to feed your fish at opposite ends of the tank.

The fish will naturally split into two groups, so a feeding frenzy is avoided.

I hope you enjoyed our guide to the best tank mates for Bubble Eye goldfish. If you loved the article and found it helpful, please share it!

Bubble Eye goldfish are friendly, peaceful creatures that can thrive when kept in groups with other Fancy goldfish or tropical species that can tolerate cooler water.

Fish to avoid include any fast-swimming species that could collide with the fragile Bubble Eyes, potentially causing injury to their water-filled bubble eye sacs.

What tank mates did you choose for your Bubble Eye goldfish? Tell us in the comments box below.