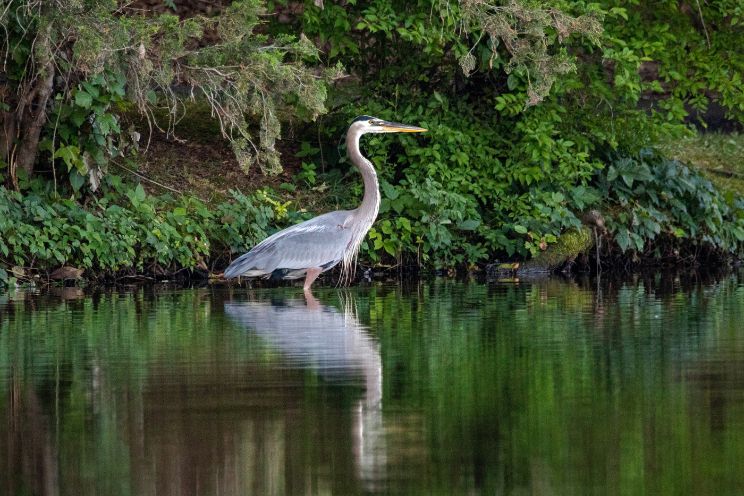 There are many predators of goldfish out there, some of which can find their way to your pond and will snap up unsuspecting goldfish!

But what animals are capable of hunting goldfish? How do I prevent them from taking my pets?

In this article, we will go through common and some uncommon species which are known to take goldfish from ponds, what to look out for and how to defend your pond from predators.

The most common predator of fish are heron; they and cranes are found throughout most of the world wherever there are naturally occurring lakes and rivers and they can be a common sight for many pond owners.

Cats are the second most common predator, although nowhere near as good at catching fish as heron. They are still capable of grabbing a fish close to the shoreline of the pond or lake, and will definitely take any opportunity they see.

Raccoons are another common predator in North America – they are opportunists and will go for fish if they are hungry enough.

Opossums will also catch fish similarly to raccoons, but not as often.

Other natural predators include:

… and many other opportunistic animals.

These animals vary in threat level depending on your location.

For example, if you live in the UK, you aren’t going to encounter any alligators in your backyard, but you can sometimes find feral turtles in certain areas, which are definitely capable fish hunters.

Are animals continuing to eat your goldfish? Let us know in the comments below!

As mentioned, there are many animals that eat goldfish. Some are specialised to do so, whereas others are not so skilled and are simple opportunists.

Here we will categorise the most commonly encountered animals, based on their level of skill in catching fish, how abundant the species is and how easily they can sneak into your garden to steal fish.

They will be ranked as high and low risk predators, but keep in mind, all of these animals can kill and eat your goldfish at any given moment, especially if they are wild as they are unpredictable.

By far the most dangerous predator of pond fish is the heron. It is often seen as the bane of pond keepers all over the world because of its tendency to constantly return to ponds, stealing fish everyday until there are none left.

The fact herons fly also makes them very successful hunters, as they can travel great distances to scout ponds with fish and can find their way into your property easily as a fence cannot stop them.

They are also extremely skilled at catching fish – many herons have been observed using bait to lure in fish before swallowing them whole!

Their long legs and ability to stand in freezing water without chilling, as well as a long neck and beak for plucking small animals from the water, means they are better equipped to pull fish from deeper waters as well as just the shoreline too.

Acting on instinct, herons can also take fish many times larger than what they are able to swallow, and will often kill koi carp by hoisting them from the water or poking holes in them with their beaks, leaving without eating any fish, but having killed for seemingly no reason.

Herons can also even spread disease across ponds as and when they dip their beaks in the water. All this makes herons a real threat to your pond fish and it is easy to see why they are hated amongst pond keepers.

However, one must remember that herons are wild animals that have been around a lot longer than we humans have, and they are simply acting on their instincts in order to stay alive.

They are not evil or cruel animals, they have just evolved to eat fish, and are very good at doing so.

Although less common than herons, especially if you live more inland, gulls and pelicans can be a large threat to your goldfish, for the same reasons a heron can be.

Although they oppose a similar threat, they aren’t as common as herons, and aren’t nearly as skilled in catching fish, making them a lesser, but still high risk threat.

If you live in the US, depending on the state you are in, racoons can be a common sight.

They are highly agile, being able to climb trees and fences or dig under them, and can find their way into garden ponds easily.

Racoons are quite well accustomed to foraging for food in ponds and streams, as shellfish and molluscs are part of their main diet.

Racoons are perfectly capable of grabbing fish with their highly dexterous hands and aren’t afraid of getting wet, making them a high risk to your goldfish.

Although not very skilled at catching fish, afraid of water and usually a house pet, cats are in such abundance and are so widespread they have become a large threat to fish.

Any fish sleeping on the outer rim of the pond in the shallow areas is at risk of getting snagged by a cat.

The cat may not even catch the fish, but can still scratch it, leaving devastating wounds which can become infected with fungus or bacteria and could eventually kill the fish if left untreated.

Although it may sound silly, we cannot rule out other human beings from being the reason your pond fish are missing.

What we mean by adding humans to this list, is that the fish are taken by people, not particularly to eat, but perhaps to thieve for themselves, take away and sell or take for any other intentions they might have.

Nevertheless, depending on your area and who you know could mean that your fish have thieving eyes on them, especially if you have expensive show winner koi carp!

Much like frogs, turtles will eat anything that will fit in their mouth, but they will also live peacefully among fish, and can do so their entire lives.

However, a hungry turtle will not pass up an opportunity to eat a fish that gets a little too close.

Turtles are incredibly fast at grabbing fish with their beaks and are powerful animals, even if they don’t grab the whole fish, they can take a chunk out of it, which can be devastating.

Most turtles however, are harmless to adult goldfish and will usually leave them alone, however, snapping turtles and alligator snappers primarily eat fish and will definitely eat your goldfish.

Alligator snapping turtles in particular even have an evolved lure on their tongue to entice fish to get close before bringing down their jaws on their curious prey.

Unless you have an open garden nearby other water sources however, turtles won’t easily find their way into your pond.

Frogs share the same habitat as fish, and often live with them side by side with no issue, however, much like fish, frogs will try to eat anything they think will fit in their mouth, including goldfish.

Frogs are not active predators, only hunting when they are hungry and will live amongst their prey peacefully most of the time.

That said, once a frog gets a taste for a food source, they will consume them with gusto.

There are cases where pond keepers observe frogs living with their fish for years with no issues, and then suddenly all the fish go missing!

This isn’t common however, and adult goldfish are relatively safe around frogs, but do not underestimate them, bullfrogs often swallow birds, small mammals and even snakes whole with relative ease.

Rats are the ultimate opportunists – they will eat nearly anything and fish are no exception, although catching a live fish may be hard for a rat, large and particularly confident rats will grab anything they can; even birds!

Rats however, look for more grain or seed based foods, so it is not common for them to hunt fish.

Crayfish and their freshwater lobster relatives are not to be trifled with – they are large armoured omnivores and will eat fish that get too close.

They can and will grab fish with their large claws and won’t let go, often devouring their prey alive!

Goldfish again are no exception to this; some people who keep crayfish as pets even feed goldfish to their lobster as a staple diet, showing just how capable they are.

However, wild crayfish seldom find themselves moving from a river into someone’s backyard pond. Although it can happen during floods, it is a very rare occurrence.

Surprisingly, yes! Dragonflies do eat fish, but not in their adult form, it is the larvae that take large aquatic prey.

They do this with a set of protruding jaws they can fire out and ambush unsuspecting pondlife with. They mainly eat other invertebrates, but will eat small fish given the chance.

They are small however, and anything over 3” is safe from their grasp, meaning baby goldfish could be at risk of being eaten by them.

Adult goldfish are more than safe however, and will actually eat both adult and young dragonfly alike.

Dragonflies are a low risk predator however, it is not commonplace for them to eat fish, but it can definitely happen.

How do I know what has been eating my pond fish?

If you notice the fish in your pond go missing, first check all the decor in your pond if there are any fish stuck or hiding –  plant pots, stones, anything; flip them over and move them to see if your goldfish are hiding underneath.

Goldfish can often become stuck behind plant pots or large objects, as they cannot swim in reverse and aren’t the most flexible fish.

If they aren’t stuck and you can’t find them anywhere, then they could’ve been taken by a predator.

It is hard to tell if an animal has taken your fish straight away and it may seem unlikely, but check for any signs of activity:

To get a better understanding, ask your neighbours if they have seen anything.

Spend more time around your pond, or you could even set up motion cameras or spy on your pond from a distance to see if anything enters the garden to take your fish.

How to deter predators of your pond fish

Depending on what the cause of your missing fish is will influence how you go about this. There are many methods to stop predators with varying levels of success and expense.

The first and easiest way to stop predation is to place a cover over your pond when you are away. A cover can come in many forms, it can be rigid plastic, malleable tarp or netting.

Anything that keeps intruders out and fish in will work; it is perhaps the most effective way of stopping your fish from being eaten.

Another method, although more expensive, is to install a fence around the garden or pond itself, stopping predators from easily accessing it. You could even go as far as an electric fence if the situation is that bad, but be prepared to lay out a few pennies.

Fence spikes around the garden can also help prevent many larger predators, like cats, racoons and people, stopping them from hurling themselves over the garden walls to get to your fish.

Ultrasonic traps can deter many mammals from the garden too, like cats and opossums. The sensor produces a high frequency sound to deter these animals, although it has varying levels of effectiveness.

Another deterans is peppermint spray. Use this along walls and pathways to your pond to deter rats, cats, frogs and a number of other small animals.
Finally, use nature to your advantage by placing rocks and marginal plants around the water’s edge to give your goldfish more cover from land animals. Stones and plantlife will make it harder to access the pond from the side and thus, keep your fish safe from outside danger.