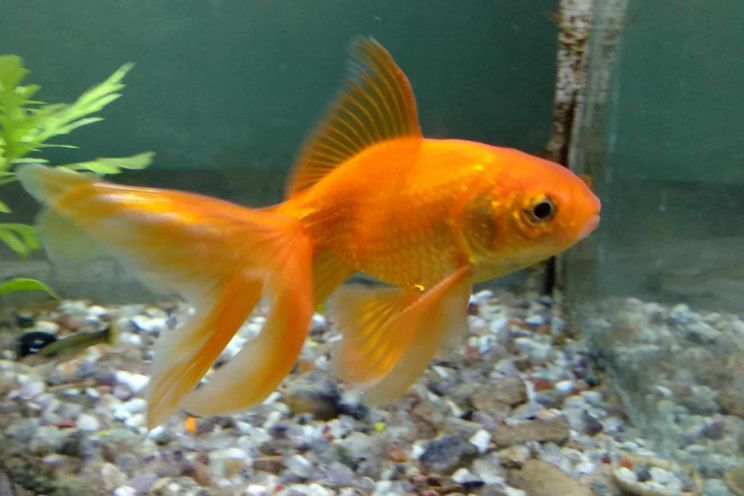 Fantails are one of the world’s most popular varieties of Fancy goldfish and are also bred for showing.

So, can you keep Fantails in a community tank with other species? How many Fantails can live together? Are Fantails peaceful fish?

Fantail goldfish are a variety of Fancy goldfish that generally grow to measure between 6 and 8 inches long. So, you can see that you’ll need a large tank to accommodate a couple of Fantails and some tank mates.

One common mistake that many newbies to the goldfish-keeping hobby make is to forget that those tiny fish in pet stores are juveniles that will rapidly grow once they’re fed a correct, high-quality diet and kept in a well-maintained, spacious tank.

I was astounded when my inch-long Fantails literally doubled in size in only a few weeks. So, it’s always best to start with a large tank of at least 20 to 30 US gallons (17-25 UK Gallons) rather than having to upsize your setup to keep up with your Fantails’ growth rate.

It’s also worth noting that for every additional fish in your collection, you’ll need to add a further 10 gallons to your tank capacity.

You might think that a small aquarium is okay for a single Fantail. However, goldfish are disgusting creatures, constantly producing waste as they cruise around the tank.

Goldfish don’t have a stomach like other fish species. Instead, the food the fish ingests is processed in the animal’s intestines. So, everything that your Fantails eat simply passes straight through the fish’s digestive system and out into the tank as waste.

That means that the water quality in a small aquarium will quickly deteriorate. Poor water quality can lead to outbreaks of common fish diseases, such as Ich, and can mean that your fish won’t thrive.

For that reason, it’s essential that you don’t overcrowd your tank and that you run an efficient, powerful filtration system to keep the water clean and healthy for the fish.

Do you keep Fantail goldfish with other fish?

What tank shape is best for Fantail goldfish?

Fantail goldfish are egg-shaped fish with flowing fins. Although the fish are beautiful, their conformation makes them poor swimmers. So, the best tank shape for Fancy goldfish, in general, is a long, shallow one.

That shape provides plenty of swimming space for the fish while also allowing them to easily swim up to the surface to feed.

Rectangular tanks also offer lots of surface area for efficient gaseous exchange, which is essential for goldfish since these fish need lots of dissolved oxygen to thrive.

If the fish can’t easily move around their habitat and oxygen levels are poor, the creatures will become highly stressed. That often leads to disease outbreaks and a failure to grow and thrive.

Never keep Fantail goldfish in an overcrowded or too small tank.

Although mature Fantails don’t generally jump, juveniles can when alarmed. So, to prevent any surprise escape attempts, we recommend that you use an aquarium that has a hood or at least a cover slide.

In addition to the safety aspect, a lid keeps dust and foreign objects out of the tank and helps to prevent evaporation.

Can you keep fantail goldfish in a bowl?

These days, the use of a traditional goldfish bowl is generally frowned on for keeping goldfish. A bowl is much too small for an adult goldfish.

The swimming space in a bowl is insufficient for these large fish, and the small surface area doesn’t provide a good platform for efficient gaseous exchange.

Can Fantail goldfish live in a garden pond?

Yes, you can keep Fantail goldfish in your garden pond.

However, there are a couple of potential issues when keeping Fantails and other varieties of Fancy goldfish in outdoor garden ponds.

That said, I have successfully kept Fantails, Telescope Eyes, and even Orandas in a garden fish pond with Koi and slim-bodied goldfish.

Are Fantail goldfish aggressive toward other fish?

Fantail goldfish are not at all aggressive toward other fish. In fact, goldfish of all types prefer to live with other fish and can become stressed and depressed if deprived of company.

If you do spot your Fantails chasing each other around the tank or pond, that’s typically juvenile high spirits or stress-related behavior in a new setup. That behavior generally settles down after the fish have had time to settle in their new environment.

Male goldfish can become somewhat feisty during spawning, chasing a female around the tank and attempting to rub against her as the male fish tries to trigger the female to deposit her eggs.

Unfortunately, that behaviour can stress the female fish, and injuries do sometimes occur.

Do you keep Fantail goldfish with other fish?

As you know, goldfish are coldwater fish. However, there are a few species of tropical fish that can live in a temperate environment with cooler water temperatures.

Since Fantails and other Fancy goldfish prefer warmer water, they can live in a community that includes some tropical species.

So, if your tank is kept in a room where the ambient temperature isn’t less than 70° Fahrenheit, you can safely keep the following species of tropical fish with your Fantail goldfish.

Brightly-colored Platies are schooling fish that are popular, and easy to care for community fish.

These livebearers grow to around 3 inches long and breed very readily when given the right conditions. But don’t worry about an overpopulation problem in your tank; your Fantails will quickly make a meal of most of the Platy fry that appears. That said, a few babies usually make it to give you a self-sustaining population.

With their brilliant rainbow colours, River Murray Rainbowfish are the supermodels of the temperate aquarium.

These vibrant fish thrive in water temperatures of around 70° Fahrenheit, showing their best coloration in cooler conditions.

Unlike many other barb varieties, Rosies are friendly sorts that won’t hassle your Fantails. These pretty fish love to cruise in shoals in a spacious tank of at least 30 gallons and can reach 6 inches at maturity.

Checkered barbs are an unusual choice that can make a nice addition to a community tank. These barbs are peaceful, schooling fish that reach up to 2 inches long and must live in groups of at least six individuals.

White Cloud Mountain minnows are probably the most well-known of all the tropical species that can live in a coldwater tank.

These little fish do best when kept in large schools in tanks with plenty of planting, driftwood, and rocks where they can hide when they feel threatened.

Zebra danios can thrive in cooler water temperatures of between 65° to 77° Fahrenheit, making these attractive, striped fish a popular companion for goldfish.

To show the fish off to their best effect, you need to keep them in large schools, so you’ll need a large tank.

These nocturnal fish live around the bottom of the tank so you won’t see much of them. However, when the barometric pressure changes, you might see the Dojo loaches flitting around the tank in agitation, predicting a coming storm front.

These quirky fish must be kept in a tank with a tightly fitting hood that has no holes or gaps around the edge, as Dojo loaches will climb out of the tank if they can find an escape route to squirm through.

In addition, you’ll need a large tank of at least 55 gallons to keep Weather loaches

If you want a bottom-dwelling fish that’s active during the daytime, you might want to consider keeping a small group of Corydoras catfish.

These peaceful catfish get along fine with Fantails, spending most of their time foraging through the substrate for scraps of food between bouts of resting and occasionally darting up to the surface.

There are over 100 varieties of Corydoras to choose from, ranging in size from 1 inch to 3 inches long.

Hillstream loaches prefer cool water temperatures of between 68° and 75°F.

Unlike other loaches, these timid fish are diurnal. You probably won’t see much of your Hillstream loaches since they often choose to hide under pieces of rock and wood or among dense plants.

If you don’t want the extra hassle of keeping tropical fish, you might want to stick to keeping Fancy goldfish with your Fantails.

In fact, there are more varieties of Fancies to consider than tropical fish, so that you won’t be short of choices!

Any of these Fancy goldfish make suitable tank mates for Fantails:

Freshwater snails and some of the larger species of shrimp also fit well with Fantails.

As an added bonus, invertebrates can make a useful cleanup crew. These busy creatures can keep your tank clean by eating algae, leftover food, and organic waste.

However, don’t make the schoolboy error of introducing very small shrimp to a Fantail tank, as the fish will quickly hunt down the shrimp and eat them!

As we previously mentioned, you shouldn’t keep Fantails with slim-bodied goldfish and Koi. Tiny invertebrates and small fish are also unsuitable candidates for life in a Fantail tank, as they are likely to end up on the menu.

How many fish should Fantail goldfish live with?

Fantails are sociable, gregarious fish that need to live in the company of other fish to thrive and do well.

That means you can keep as many Fantails as you have space for. So, if you have a very large pond, you can have a large group of these gorgeous, friendly fish.

Too many fish in a small space causes stress, which often results in disease outbreaks, parasite attacks, and a general failure to thrive.

Goldfish that are kept in cramped conditions don’t usually grow properly, even suffering from growth defects and conformational abnormalities.

Keeping too many fish in a small space causes problems at feeding times, too, as the largest fish usually gobble up all the food. That leaves the smaller, weaker fish without enough nutrition to support their needs. In extreme cases, the combination of a lack of food and stress results in fish kills.

One easy solution to feeding time problems is to feed your fish at two different locations in your pond or tank. That way, the fish graduate into two different groups, ensuring that each fish gets an equal share of the food, and the pushing and barging that often happens during a feeding frenzy is avoided.

Did you enjoy our guide to the best Fantail goldfish tank mates? If you did, please share the article helpful before you go!

Fantails are peaceful, sociable fish that love to live in large groups in a spacious tank or outdoor garden pond with other similar-sized, gregarious fish.

There are quite a few tropical fish species that do well in cooler water conditions, any of which would make good tank mates for Fantails.

If you prefer to stick with keeping goldfish, pretty much any of the round-bodied Fancy goldfish types are a good choice. I would advise against adding very small shrimp or fish to your goldfish community, as those tiddlers could end up being eaten.

Slim-bodied, fast swimmers should also be avoided to avoid collisions and injuries.

Do you keep Fantail goldfish? Do they live outside in a pond with other goldfish? Tell us about your Fantails in the comments box below.