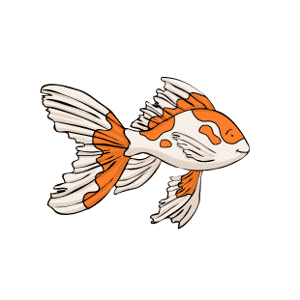 The veiltail is one of the more recently recognized fancy goldfish varieties in its own right, having been developed in Philadelphia, USA, in the early part of the 20th century.

Due to the body shape of the veiltail, the fish’s swim bladders are round in shape rather than elongated. This makes veil tail goldfish more vulnerable to developing a loss of balance. Many older veiltails will not display perfect balance as they age.

Because the veiltails fins are so long and luxurious, it is vitally important to ensure that a top quality, balanced diet is fed to the fish. This ensures that the fins and tail stay in good condition and do not become congested or raggedy.

The length of the fins and tail itself can hamper movement in some veil tail fish. They therefore tend to be quite slow-moving.

Veiltails also tend to become stressed in busy tanks or tanks with faster fish, and they may become the target for bullies due to their easy-to-grab tail and fins.

Due to their very long tails and fins, the movement of mature veiltails may be hampered. It is therefore important to ensure that the breeding tank has plenty of open space to avoid the fish from becoming tangled in the substrate, dividers or spawning medium.

The male and female veiltail are very similar, both having a short, round body shape. The female will often appear slimmer than the male other than when gravid. During the breeding season, telling male from female is relatively easy.