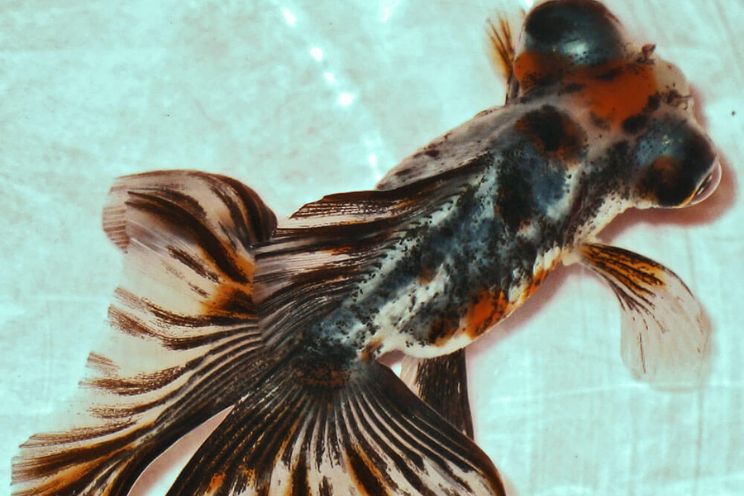 Butterfly Tail goldfish are a beautiful variety of Fancy goldfish with wide-lobed, spreading tail fins that resemble a butterfly’s wings when viewed from above.

These gorgeous fish are straightforward to care for, but what are the best tank mates for Butterfly Tail goldfish? How many of these beauties can live in the same aquarium? Are Butterfly Tails aggressive fish?

Read on to find out what fish and other creatures can make good Butterfly Tail goldfish tank mates.

What size tank does a Butterfly Tail goldfish need?

The Butterfly Tail is a variety of Fancy goldfish. Although you might think that goldfish are quite small, they can actually grow to measure between 6 and 7 inches long, not including their flowing fins!

Those tiny inch-long fish you bring home from the fish store grow very quickly when fed a high-quality diet. Within a couple of months, the fish will double in size, rapidly outgrowing a small tank.

So, we recommend that you start with a tank of at least 20 to 30 gallons or larger. Starting with a large setup means that you won’t need to worry about taking the whole tank down and upsizing it in the future. You’ll also need to add an additional 10 gallons to your aquarium size for each additional goldfish you keep.

If the tank is too small, the fish could suffer from stunted growth and a general failure to thrive.

Aside from providing more swimming space for your goldfish, you’ll need a large tank to cope with the mess these fish create.

Goldfish of all varieties are made slightly differently from most other fish species in that they don’t have a stomach. So, the food the goldfish ingest passes through the fish’s intestines and straight out into the tank water once the nutrients have been extracted.

Since goldfish are constantly foraging for food, even eating algae and tender plant shoots, they produce a lot of waste throughout the day.

In a small tank, that fish waste quickly pollutes the water, leaving the fish vulnerable to ammonia and nitrate poisoning and placing undue strain on your filter system. A larger tank with greater water volume dissipates the fish waste more efficiently, keeping the environment safe for the fish.

Bottom line: Don’t overcrowd your tank, and run a powerful filter system to process the waste the fish produce.

What tank shape is best for Butterfly Tail goldfish?

A deep tank makes it very difficult for the fish to reach the surface to feed. That causes stress, compromising the fish’s immune system and leaving the Butterfly Tail susceptible to common fish diseases and parasite attacks.

Ideally, you want to choose a long, rectangular-shaped tank. That tank shape provides the fish with ample swimming space and makes it much easier for them to get to the surface.

In addition, goldfish are oxygen-hungry fish that need adequate dissolved oxygen in the water. A rectangular tank provides plenty of surface area for efficient gaseous exchange and good oxygen levels.

Does a Butterfly Tail goldfish tank need a lid?

Although Butterfly Tail goldfish can’t jump out of their tank, we recommend that you choose a tank with a cover slide or lid.

A lid helps to keep dust and foreign objects out of the water and prevents evaporation.

Can I keep my Butterfly Tail goldfish in a bowl?

As children, most of us kept a goldfish in a traditional bowl. However, such containers are now frowned upon by vets for keeping goldfish. In fact, in some countries and states, it’s now illegal to keep one goldfish on its own.

A goldfish bowl is far too small for a fully-grown goldfish. There simply isn’t enough swimming space for the fish, and the tiny surface area doesn’t provide a satisfactory gaseous exchange.

In addition, it’s not feasible to run a suitable filtration system in a bowl. Since goldfish are so filthy, you must have a powerful filter to cope with the amount of waste the fish generate.

Finally, goldfish are social creatures that are happiest when kept in groups. A goldfish bowl is far too small to house more than one fish.

Can Butterfly Tail goldfish survive in a garden pond?

It is possible to keep Butterfly Tail goldfish in your garden pond. However, there are a few caveats to that.

However, if your local climate is warm, you can keep Butterfly Tails in a large, well-maintained pond that contains suitable tank mates for these beautiful Fancies.

Do you keep Butterfly Tail goldfish?

Are Butterfly Tail goldfish aggressive toward other fish?

Butterfly Tail goldfish are not aggressive toward any other fish, including other varieties of goldfish. In fact, goldfish are gregarious fish that thrive when kept in large groups of similar types.

That said, there are a couple of times when you might witness what looks like aggression in your goldfish.

Although Butterfly Tail goldfish are not aggressive, they have been known to eat small shrimp and tiny fish.

Although Butterfly Tail goldfish are a coldwater species, there are some tropical fish that can survive in more temperate water conditions.

To keep tropical fish with goldfish, you need a tank that maintains a stable water temperature of over 70° Fahrenheit.

So, what tropical fish species can make suitable companions for Butterfly Tail goldfish?

White Cloud Mountain minnows are a go-to species of temperate fish for many hobbyists who want a tropical species to add to their goldfish community.

These active little fish should be kept in large schools in a well-planted tank with plenty of caves, rocky overhangs, and driftwood where the fish can hide when they want to.

A large group of Zebra danios makes a good addition to a coldwater community setup where the water temperature remains between 65° and 77° Fahrenheit.

These tiny schooling fish are fast and agile swimmers that are usually too quick for goldfish to catch and eat. However, as a precaution, you should provide plenty of dense planting and hardscape where the fish can hide if they feel threatened.

Platies are easy to care for livebearers that are excellent peaceful community fish.

These fish come in vibrant colours, growing to around 3 inches long. Platies constantly breed, producing vast numbers of fry that your goldfish will eagerly gobble up. However, a few babies usually survive, providing you with a self-sustaining population.

If you want a brightly-colored fish for your coldwater community, the River Murray Rainbowfish is an excellent candidate.

These fish thrive in cooler water conditions, producing their most vibrant colours in water temperatures of around 70° Fahrenheit.

Although many species of barbs can be aggressive and unsuitable for life in a community setup, Rosy barbs are peaceful fish. These pretty schooling fish need a large tank of at least 30 gallons since they can reach 6 inches in length when full-grown.

Checkered/Chequered Barbs are a peaceful species that must live in groups of at least six individuals. These pretty fish school around the tank, growing to around 2 inches long.

The Weather Loach is also called the Dojo Loach.

These fish are nocturnal, living on the bottom of the tank and venturing out at night to feed and forage around the substrate. When the barometric pressure rises, the fish become hyperactive, indicating a coming storm, hence their common name.

Weather loaches are proven escape artists, climbing out of the tiniest hole. So, make sure that your tank lid fits tightly. Note that these fish need a 55-gallon tank to be comfortable.

These fish are peaceful little creatures that are super-easy to care for. Corys live on the substrate, occasionally darting up to the surface to snatch a mouthful of air. There are over 100 species of Corydoras to choose from, ranging from 1 to 3 inches long. Although they’re not strictly schooling fish, Corys must be kept in groups of at least five to be happy.

The Hillstream loach thrives in cool water temperatures between 68° and 75°F.

Hillstream loaches are diurnal. However, you probably won’t even see these fish since they spend much of their time hiding under pieces of wood or rocks or seeking shelter in bushy plants.

Tell us about your community tank in the comments

If you don’t fancy the idea of keeping tropical fish, you can create a vibrant, interesting community tank that features only Fancy goldfish.

Fancy goldfish of all varieties can live together harmoniously, and there are plenty of different types to choose from. All the following Fancy goldfish species can make excellent tank mates for Butterfly Tail goldfish:

You could also add a few larger invertebrate creatures to your aquarium. Snails and shrimp make interesting, entertaining community members. These creatures can help the hobbyist by eating leftover food and grazing on algae and detritus, helping to keep the environment clean and tidy.

Freshwater snails of all varieties do fine with goldfish. However, small shrimp will most likely be eaten by the fish and are best avoided.

As we previously mentioned, we don’t recommend keeping slim-bodied goldfish and fast swimmers with Butterfly Tail goldfish. In addition, tiny fish and shrimp species will probably feature on the goldfish’s lunch menu and are best avoided.

Finally, don’t keep any fish that are known to be fin nippers, as they will probably damage your Butterfly Tails’ extravagant fins.

How many fish should Butterfly Tail goldfish live with?

Butterfly Tail goldfish need to be kept in company with other fish to be happy and thrive. So, in theory, you can keep as many fish with your Butterfly tails as you have space for!

However, you must take care not to overcrowd your fish. Squeezing too many fish into your aquarium will stress the fish, leading to parasite attacks, disease outbreaks, and a failure to thrive.

Too many fish in the tank also places an undue strain on your filter system, potentially leading to unhygienic water conditions and sick fish.

Finally, having too many fish competing for food at feeding times will cause problems since the bigger fish bully the smaller ones. So, the smaller fish won’t get the nutrition they require to thrive and grow. The stress that causes leads to health problems and starvation can even result.

Did you enjoy our guide to the best Butterfly Tail goldfish tank mates? If you did, please share it before you go!

Butterfly Tail goldfish are sociable fish that do best when kept in groups with similar goldfish varieties or small, peaceful tropical fish species.

It’s best to avoid keeping shrimp with goldfish, as these are often regarded as a food source by the fish. Comets and Shubunkins should be avoided, as these fast swimmers can sometimes collide with the Butterfly Tails, causing injury.

Do you keep Butterfly Tail goldfish? Do you keep any species of temperate, tropical fish with them? Tell us about your community tank in the comments box below.