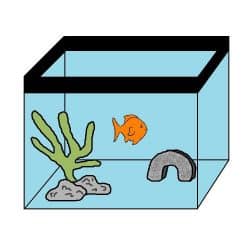 Understanding the nitrogen cycle can be difficult, but knowing how to cycle your tank correctly is crucial to the health of your fish.

We’ll explain what the nitrogen cycle is, how it affects your tank and what you need to do to manage it.

What is the nitrogen cycle?

The nitrogen cycle is the process through which nitrogen is moved from the atmosphere to plants, animals, bacteria and then back to air.

In nature, that cycle works fine and needs no help from humans. However, that’s not the case in your goldfish tank.

In an aquarium, the nitrogen cycle is a biochemical mechanism where organic waste matter continuously breaks down into various nitrogenous compounds, specifically from ammonia to nitrite to nitrates.

Nitrates are removed from the water by plants for use as fertiliser, through partial weekly water changes and via biological filter media.

Managing the nitrogen cycle in a fish tank

Ever wondered how to manage the complicated nitrogen cycle in a fish tank? Here, we break down the steps and make it easier for you to manage it yourself at home.

You can manage the nitrogen cycle in your goldfish tank by running a biological filter system.

Biological filter media comprises sponges or other media that provide a platform for colonies of beneficial bacteria to grow. The bacteria break down ammonia and nitrites, keeping the water safe for your fish.

It takes around three months for a colony of bacteria to become sufficiently established to effectively process the waste products produced by your fish and render the water safe.

Stages of the nitrogen cycle

There are three key stages to the nitrogen cycle:

During the initial stage of the nitrogen cycle, organic matter, such as fish waste, plant debris and uneaten food, starts to decay. During that process, the metabolism of certain proteins produces ammonia.

Ammonia is a dissolved gas that’s highly toxic to goldfish and invertebrates. Even low levels of ammonia can cause chemical burns to the fish’s delicate gill tissue. Generally, excess ammonia in the water is the result of overcrowding or overfeeding.

When a fish tank is correctly balanced, a Nitrosomonas bacteria processes the ammonia, oxidising it to create nitrite.

Nitrite is also toxic to fish, having a disruptive effect on the blood’s capability to transport blood around the fish’s body. However, your goldfish are generally able to cope with twice the amount of nitrate compared with ammonia.

In the final stage of the nitrogen cycle, Nitrobacter bacteria consumes the nitrites, releasing a chemical called nitrate in the process.

Nitrate is less toxic than ammonia and nitrite but is still harmful to fish if the concentration rises over 20ppm (parts per million.)

In nature, nitrate simply leaves the water as harmless nitrogen gas, but that can’t happen in the closed environment of your fish tank. So, partial water changes are essential to keep the nitrate at safe levels, and you can use living plants to absorb some of the nitrates from the water of your goldfish tank.

Have you had any issues with nitrogen cycling in your tank? Tell us in the comments!

How to start the nitrogen cycle

Before you can safely add goldfish to your tank, the nitrogen cycle must be established and working efficiently. In the hobby, that process is referred to as “cycling”.

Whenever you add tap water to your fish tank, you must use a dechlorinator to get rid of chloramines and chlorine in the water.

Those chemicals will kill the beneficial bacteria that you’re trying to grow in your fish tank.

Nitrite is produced as Nitrosomonas bacteria process the ammonia in the water. As the number of those bacteria grows, the nitrite levels increase. In turn, nitrite-eating Nitrobacter bacteria proliferate rapidly because of the vast amount of nutrients in the water.

At that time, a nitrite spike is reached, and the nitrite levels in the water drop since the bacteria process the nitrite faster than it’s produced.

Nitrate management in a fish tank

At the end of the nitrogen cycle, nitrate is produced. As well as being toxic to fish, high levels of nitrate cause algae bloom.

You need to manage the nitrate levels in the water by performing water changes of around 30% every week.

As mentioned above, if you add living plants to the setup, that can also help to control nitrate levels.

When will my fish tank be fully cycled?

Your aquarium is fully cycled when the ammonia and nitrite levels in the water are zero and nitrates are at 30ppm or lower.

You’ll need to buy a suitable aquarium water testing kit so that you can test the water in your goldfish tank every week.