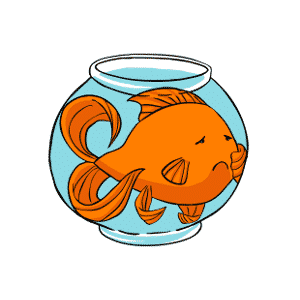 Goldfish are some of the most widely studied and understood of all of the popular pet fish species. However, there are still a huge number of myths and misconceptions about them.

For instance, do goldfish really only have a memory span of a few seconds? This is one of the most commonly stated goldfish “facts,” and one that is totally inaccurate!

Read on to learn more about some of the most common myths and misconceptions that surround keeping goldfish, plus the truth behind them.

Goldfish have a three-second memory

This is probably one of the most commonly quoted goldfish myths. And unfortunately, it’s often used as an excuse to keep goldfish in a small, boring tank! Goldfish do not actually have three-second memories. In fact, goldfish can recognize other fish, their environment and even the times that they are fed and who feeds them and retain memories for at least three months.

Goldfish don’t live for more than a couple of years

Goldfish kept in poor conditions will not thrive and may well die before they reach the age of two. But it doesn’t have to be that way. Healthy and properly cared for goldfish can live for upwards of ten years! You should therefore view your goldfish as a long-term pet.

While goldfish can live on plants alone and are often referred to as herbivores, in reality, goldfish are omnivores. This means they will eat both plant and animal material. Goldfish like to scavenge, and as well as eating plants, they will eat detritus that they find on the floor of their tanks.

The store-bought foods that most people feed to their goldfish contain both plant matter and animal matter.

One of the most dangerous goldfish myths: Goldfish only need a small bowl with no filter

It used to be very common to see one or two small goldfish kept in a small goldfish bowl. These bowls have very poor aeration and usually no filtration, which is very bad for goldfish.

Goldfish produce a lot of waste – much more than the average small bowl can handle – so they need a big tank or pond with lots of water in order to thrive.

A small, still water bowl or tank is not an appropriate home for even the smallest of goldfish!