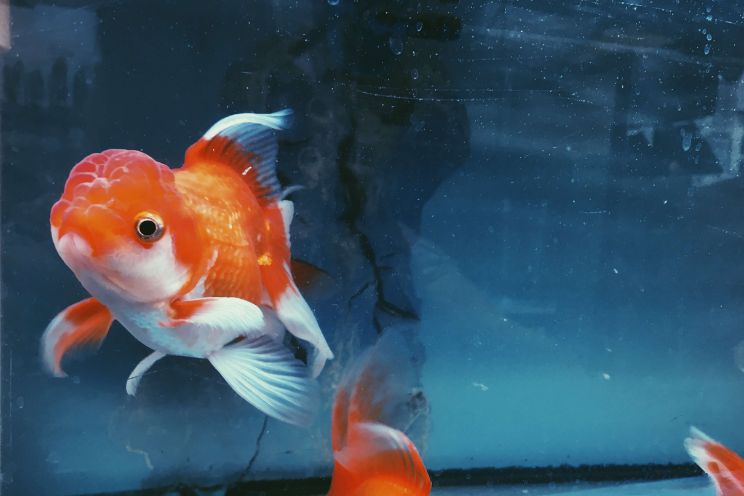 Oranda goldfish are popular, beautiful fish that many hobbyists would like to keep in a mixed community tank.

Orandas are a variety of Fancy goldfish that typically grow to measure 6 to 7 inches in length. So, you’ll need a fairly large tank to accommodate these beauties and a few friendly tank mates.

It’s crucial to remember that when you choose a cute little Oranda from your local fish store or pet shop, you’re actually buying a juvenile fish.

Like all goldfish varieties, Orandas grow quickly provided you give them a nutritious, balanced diet. So, that tiny fish will rapidly outgrow a small aquarium.

For that reason, we recommend that you start with a 20 or 30 US gallon tank (17 – 25 UK gallon) so that you won’t need to upscale just a few months after buying your new pet.

For every additional goldfish you add to your community, you’ll need to add an extra 10 gallons.

Although a smaller tank might appear suitable for an Oranda goldfish, goldfish are generally very dirty fish. The water quality in a small tank will quickly deteriorate, even with an efficient filter system.

So, a larger tank fitted with an appropriately sized filtration system will stay clean for longer, saving you time and work and being healthier for your fish.

How big do Oranda goldfish get?

Oranda goldfish can grow to measure 6 to 7 inches in length. You will need a decent sized tank to accommodate these lovely Fancy goldfish.

What tank shape is best for Oranda goldfish?

Like all Fancy goldfish varieties, Orandas are slow swimmers that wouldn’t win any races! So, a rectangular aquarium with plenty of space for swimming is the best option for these fish.

Don’t use a deep tank for Orandas. These clumsy swimmers could find it difficult to get to the surface to feed. That would cause stress, compromising the fish’s immune system and leading to disease and health problems.

Mature Fancy goldfish don’t generally jump since their luxuriant finnage and body shape doesn’t allow that kind of activity. However, juvenile specimens are more agile and have been known to leap right out of their tank during routine maintenance. So, we recommend using a tank with a cover slide or a tightly fitting lid.

A lid also keeps dust and debris out of the tank and helps to prevent evaporation.

What tank mates do you keep with your Oranda goldfish?

Can I put an Oranda in a goldfish bowl?

Although you might remember keeping a goldfish in a bowl when you were a little kid, bowls are not suitable for goldfish.

Well, a goldfish bowl is simply too small and cramped for a large goldfish to swim around. In addition, the surface area offered by a bowl doesn’t provide adequate gaseous exchange for these oxygen-hungry fish.

Can Oranda goldfish live in a pond?

In theory, Orandas can live in a garden pond.

However, there are drawbacks to that approach to keeping Orandas.

Like all Fancy goldfish, Orandas prefer a slightly warmer water temperature than long-bodied goldfish varieties. So, if you live in a region where the winters are very cold, your Orandas might suffer if kept outside in a pond.

Are Oranda goldfish aggressive towards other fish?

Goldfish are not aggressive fish. In fact, all goldfish varieties enjoy the company of their own kind and other similar fish species.

Sometimes, you might see your goldfish chasing each other around the tank. That behaviour generally occurs between juveniles in a new setup and typically settles down after a few days of acclimation.

Male goldfish can appear aggressive during spawning, chasing the female around the tank, sometimes to exhaustion. If you see that happening, it’s often best to remove the female to a quarantine tank to give her a chance to recover.

Do Oranda goldfish eat other fish?

No, Oranda goldfish won’t eat other fish. They are not aggressive at all and enjoy the company of other compatible fish.

Since Oranda goldfish prefer slightly warmer water conditions than their slim-bodied counterparts, you can keep a mixture of some tropical species and Orandas.

Tropical fish species that work well with Orandas include:

In theory, the minnows are small enough to be eaten by a large Oranda. However, these little fish are very quick and agile, so they can easily outrun the goldfish.

To be on the safe side, be sure to include lots of dense planting and rockwork where the minnows can take refuge when they need to.

Platies grow to around 3 inches long, making them too large to be viewed as a food item by the Orandas.

These attractive, brightly colored livebearers must live in schools of at least five fish. Platies breed readily in the aquarium, so you’ll probably end up with lots more fish than you started with!

However, your goldfish will gobble up most of the fry, effectively keeping the population in check.

Rosy barbs are peaceful schooling fish that grow to around 6 inches in length, so you’ll need a tank of at least 30 gallons to accommodate them.

Unlike other barbs, Rosies are peaceable fish that won’t hassle your Orandas.

River Murray Rainbowfish are truly beautiful fish that do well in cool water temperatures of around 70° Fahrenheit.

In fact, these gorgeous fish show their best colours in cooler conditions.

Chequered barbs are a more unusual tropical aquarium species that can make a good addition to a community setup.

These are schooling fish that need to live in groups of at least eight individuals and grow to reach around 2 inches in length.

Zebra danios are a common sight in goldfish community aquariums and can thrive in water temperatures from 65° to 77°F.

Zebra danios should be kept in large schools, creating a beautiful sight as they dart in and out of your plants and rockwork.

Weather loaches live on the bottom of the tank, hiding among your plants and decorations. These remarkable fish can detect fluctuations in barometric pressure. When the pressure changes, the loaches become hyperactive and agitated, indicating an approaching storm front.

If you decide to add Dojo loaches to your Oranda’s tank, you must have a setup with a cover slide or tightly fitting lid. These fish can climb, and they will escape if the opportunity presents itself!

Note that you need a tank of at least 55 gallons to keep Weather loaches.

Hillstream loaches prefer cool water conditions of 68° to 75°F. These fish are quite shy, spending most of their time hiding under rocks, decorations, pieces of wood, and around plant bases.

Corydoras come in over 100 varieties and can make good companions for Oranda goldfish.

Like most catfish species, Corys spend most of their time foraging around the bottom of the tank. These little fish grow to measure up to 3 inches long and need to live in small schools of five or more individuals.

If you don’t fancy keeping tropical fish with your Orandas, there are plenty of other options to consider.

The best companions for Orandas are other varieties of Fancy goldfish! Orandas can be vulnerable to injury by faster swimming fish varieties, and their wen is easily damaged.

You can also keep freshwater snails and large species of shrimp with Oranda.

As well as providing company for your Orandas, these industrious little creatures make an excellent cleanup crew. Snails and shrimp spend much of their day foraging for scraps of leftover food and eating waste and general detritus, helping to keep your tank clean.

However, smaller shrimp should be avoided, as the Orandas will eat them!

Can Oranda and Ranchu live together?

Yes, Oranda and Ranchu goldfish can live together happily. They will enjoy each others company and be happier when kept in groups (with enough space!).

What tank mates do you keep with your Oranda goldfish?

Since Orandas are clumsy, slow swimmers, they should not be housed with speedier, more agile types of large goldfish, such as Comets and Shubunkins.

Very small fish, tiny shrimp, and fish that have a reputation as fin nippers should also be avoided.

How many fish should Oranda goldfish live with?

Oranda goldfish are highly social fish that do best when living in large groups. So, in theory, you can keep as many fish as you want to, provided you have a large enough pond or fish tank.

However, you must not overcrowd your fish!

Stress compromises the fish’s immune system, leaving the creatures susceptible to disease and a general failure to thrive.

Feeding time can be stressful for large fish communities, as the biggest individuals tend to bully the smaller, weaker ones. You can ensure that all your fish get their fair share of food by feeding the fish at separate ends of your tank.

That way, the fish naturally split into two groups, and a feeding frenzy is avoided.

Did you enjoy our guide to the best Oranda goldfish tank mates? If you found the article helpful, please share it!

Oranda goldfish are peaceful, social fish that thrive when kept in groups of their own kind, with other Fancy goldfish and some tropical fish species that tolerate cooler water conditions.

Orandas are large fish when fully grown, so small shrimp and fish might be considered as food sources. We recommend that you don’t keep Orandas with slim-bodied, fast-swimming goldfish. These speedy types can outcompete the slower Orandas at feeding times, and collisions are almost inevitable.

What tank mates do you keep with your Oranda goldfish? Tell us in the comments box below!