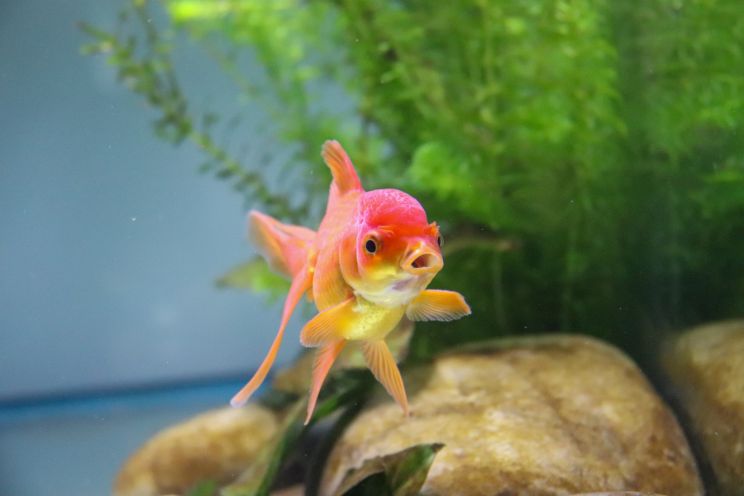 Comet goldfish are strikingly beautiful fish that do best when kept in large ponds in the company of other similar types of fish.

But are Comets peaceful fish? How many Comets can you keep together? And can you keep Comet goldfish in a tank?

Read this guide to find out what fish species make the best Comet goldfish tank mates.

Goldfish of all species can grow pretty large. Even Fancy goldfish can reach up to 8 inches long, depending on the variety.

Comets can reach 14 inches in length or even greater and are also extremely fast, agile swimmers.

So, you’ll need a very big aquarium to keep Comets. In fact, you’ll need a 75 US gallon (63 Uk gallons) tank to keep just one Comet comfortably! But these sociable fish should be kept in groups to prevent stress, and you must add a further 50 US gallons (52 UK gallons)  per fish to your tank size. That’s a very large setup!

For that reason, we recommend that Comet goldfish be kept in large garden ponds.

Unfortunately, many Comet goldfish were given away as funfair prizes in years past. Those fish usually ended up in a tiny fishbowl, surviving only briefly in cramped, unsuitable conditions with no filtration or sufficient dissolved oxygen in the water.

Thankfully, these days kids are usually presented with a cuddly toy or a bag of sweets instead of a poor, unfortunate goldfish as a prize.

All goldfish are descended from a wild species of Prussian Silver carp that live in ponds, rivers, and other large water bodies.

Needless to say, we recommend that you keep Comet goldfish in a garden pond where they have plenty of space to swim and can live with a group of suitable pond mates.

Comets can tolerate both cool and warm water temperatures and make a glittering, easy-to-care-for addition to any pond.

Are comet goldfish aggressive towards other fish?

Comet goldfish are typically peaceful, social fish that do not show any aggression toward other fish species, including other Comets.

However, sometimes male goldfish can pursue females around the pond during spawning, often to the point of exhaustion. That said, the fish generally recover once the courtship “dance” has finished.

In addition, goldfish are omnivores that will eat small shrimp, fish fry, and tiny crustaceans if they get the chance. Although that might present as aggressive behaviour, it’s simply the Comets opportunistically feeding.

As you know, Comet goldfish are a coldwater species that live in water temperatures of between 60° and 70°F.

Most tropical fish species need warmer water than that to survive and thrive. That said, there are a few species of small tropical fish that will do well in such conditions.

However, you need to remember that Comets are fast fish with large mouths that will happily make lunch of tiny fish, so keeping them together is rarely a successful combination.

However, a couple of tropical species can live in an outdoor pond or huge tank with Comets:

The Dojo loach is also commonly called the Weather loach.

Dojo loaches live on the bottom of the habitat and need a large tank of at least 55 US gallons (46 UK gallons) to be happy.

These fish can also do well in an outdoor pond, although we recommend that you bring them indoors to overwinter if you live in a cold region where the temperature drops to around freezing or below.

Weather loaches can detect changes in barometric pressure, displaying almost hyperactive behaviour when the pressure fluctuates. So, if you spot your Dojo loach becoming agitated and flitting crazily around in the water, it’s a sure sign that you’re in for bad weather.

If you keep your loaches in a tank, you should know that these strange little fish are accomplished climbers. So, you need a cover slide or a tightly fitting lid, and you must block up any holes or openings to prevent accidents!

However, in a pond, the fish are kept busy scavenging in the darkness on the substrate and rarely attempt to relocate.

Fish keepers living in New Zealand or Australia should avoid keeping Dojo loaches. These creatures can easily escape from ponds during flood conditions and get into waterways, where they quickly become invasive, displacing native fish species.

In the UK, you need the proper paperwork if you want to sell Dojo loaches. However, you can keep them legally in a pond or tank. Although these creatures usually only reach around 3 inches long in a tank, Dojo loaches can easily get to around 8 inches or even more in a pond setting.

There are over 100 species of Corydoras catfish to choose from, many of which grow quite large.

Corys are charming, bottom-dwelling fish that are tolerant of cooler water conditions, scuttling busily around the substrate in search of scraps between resting periods when they hardly move at all.

You need to keep Corydoras catfish in schools of at least six or more individuals.

Do you keep Tropical Fish with your Comet goldfish?

As well as the two tropical fish species mentioned above, there are quite a few other fish that make good tank mates or pond mates for Comet goldfish.

Koi are probably the most popular pond mates for Comet goldfish.

Koi are large, fast swimming fish that have pretty much the same requirements in terms of food, water conditions, and general environment. In fact, Koi and goldfish are very closely related and can even breed to produce a hybrid offspring!

That said, Koi can grow up to 3 feet in length and generally outlive the goldfish, sometimes surviving for over 35 years.

Shubunkins are a variety of long-bodied goldfish. They are similar in appearance to Comets except for their elongated finnage and beautiful calico coloration.

Shubunkins can grow up to 14 inches in length, enjoy a similar environment and diet to Comet goldfish, and are relatively easy to look after. Although not strictly schooling fish, Shubunkins are happiest when kept in groups of similar types.

The Orfe is another popular species of pond fish that is related to carp and goldfish and can make good pond mates for Comets. Orfe enjoy the same conditions as Comets, and the two species share the same basic water and dietary requirements.

However, Orfe can grow up to 2 feet in length, and they prefer to live in large schools. That means you need a pretty large pond to accommodate them.

The sterlet is a similar fish to the much larger sturgeon.

These fish resemble common catfish and eat a similar diet, rooting through the substrate and looking for crustaceans and worms to eat. Sterlets can make good pond mates for Comet goldfish, as they can tolerate cold winter weather and won’t hassle the goldfish.

Common carp are distantly related to Comet goldfish and share a similar lifestyle. However, Grass carp are very closely related to goldfish in general.

Both these varieties of carp need pretty much the same food and conditions as the Comets, grow to a large size, in some cases over 3 feet, and are equipped to survive over winter.

Frogs can also be excellent pond mates for Comet goldfish, and both species can typically live together peacefully.

Certain snail species also make good tank mates for Comets, and they can also work to keep the environment clean and tidy.

Snails breed readily in the aquarium, creating a self-sustaining population. However, your goldfish will most likely eat snail eggs and young, which will keep the snail numbers under control.

Comet goldfish are fast, agile swimmers that need to live with similar types.

Mixing slow-swimming Fancy goldfish varieties with Comets is not a good idea. Fancy goldfish are clumsy swimmers that can easily be bumped and buffeted out of the way by the speedy Comets and other slim-bodied goldfish. That often ends in injury and stress to the Fancies, potentially leading to disease outbreaks and death.

At feeding times, Fancy goldfish often go hungry, as they aren’t quick enough to get their share of the food on offer. Bubble Eye and Telescope Eye goldfish are particularly hampered by their poor vision and wobbling swimming style.

Very small fish and shrimp will quickly be gobbled up by hungry Comets, so we recommend that you don’t include these in your setup or pond.

How many fish should comet goldfish live with?

As previously mentioned, although they aren’t strictly schooling fish. Comets are sociable creatures that do best when kept in large groups of similar species. So, as long as you have a very large aquarium or garden pond, you can keep as many Comets in a community setup as you want.

That said, make sure you have plenty of space to accommodate all the fish you have comfortably.

Overcrowding causes stress, which compromises the fish’s immune system, ultimately leading to sickness and even death.

Be vigilant when feeding your fish to ensure that everyone gets an equal share. You might need to feed the fish in separate groups at either end of your tank or pond to prevent the larger fish from grabbing the lion’s share.

Did you enjoy our guide to the best Comet goldfish tank mates? If you did, please share the article!

Comet goldfish are peaceful fish that do best when kept in company with other similar types of fish. A couple of tropical species, including Dojo loaches and Corydoras catfish, will tolerate the same water temperatures as those preferred by Comets.

We recommend that you don’t keep your Comets in a tank unless you’re prepared to upsize the setup as the fish grow.

Avoid mixing slow-swimming Fancy goldfish species with the speedy Comets, as collisions and injuries are bound to happen, and the Fancies will almost certainly miss out at feeding times.

Very small fish and shrimp also make poor tank or pond mates for Comets, as these large fish will happily make a meal of anything that will fit into their mouths.

What pond mates do you have for your Comet goldfish? Tell us in the comments box below!