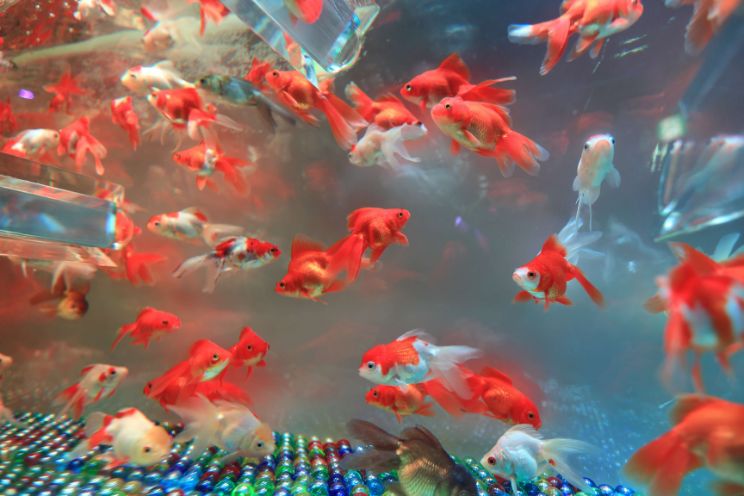 If you own fancy goldfish that are getting too large for your tank, or you like the look of them and have a nice garden pond you want to add them to, you want to know if it can be done.

In our guide we aim to answer some commonly asked questions about fancy goldfish in ponds.

Can it be done? Why or why not? Are there any complications to keeping fancy goldfish outdoors?

Do you have fancy goldfish outdoors?

What are fancy goldfish?

“Fancy goldfish” is a loosebasket term for any man made breeds of carassius auratus, that have dramatically altered body proportions.

Unlike the comet or shubunkin, which have a body plan similar to the wild ancestor, fancies usually have curved spines, elongated fins and tail, different shaped faces or eyes, etc.

So a fancy goldfish has a different morphology, to a standard breed.

Each breed differs in how exaggerated its fancy extremities are.

All fancy goldfish are physically impeded due to their body shape and usually have digestion issues and aren’t good swimmers, so much like a pedigree dog breed, they require more care and attention than their “standard” counterpart.

The shapes and forms fancy goldfish come in are actually just bred in deformities. As fish have so many babies, mutations and deformities are common, and so a fish could be born with a crooked back or have two tails!

These deformities have been seen as aesthetically pleasing to some and over the years have been selectively bred into the goldfish.

The crooked backs of Ryukens, Ranchus and many other fancy breeds, is a common deformity in all fish, and is called “ballooned” when their back is bent like a hunch.

It impedes their swimming abilities and compacts their organs, so they are very delicate.

Yes they can, but they cannot put up with really cold temperatures below 10C/50f or steep fluctuations as well as the Comet or Shubunkin can.

As fancy goldfish are largely bred overseas in places like Singapore, or bred in aquariums in the west, they aren’t used to surviving outside over freezing winters, so they may not fare well if you live in a cold climate.

Can indoor goldfish live outside?

Again, much like fancy goldfish that have been bred in a warm tank, they can, but they may not be able to put up with really cold temperatures right away, they must adjust over time.

We always recommend moving your goldfish outside over summer if possible, where the temperatures are warm and stable.

If you must move them out during winter, autumn and spring, we recommend taking measures to keep the temperature more stable at night time, like adding a cover to your pond to trap heat, or adding a temporary heater to keep them warm.

Fish that have been raised at a constant temperature all their lives can become shocked and die if exposed to freezing temperatures or significant fluctuations.

What kind of goldfish can live in an outdoor pond?

All goldfish can live in an outdoor pond, but only some can live out all year round.

Fancy goldfish usually do not do well outside over winter, and so while they can live out in summer, we recommend taking them indoors over winter and late autumn.

The best goldfish to keep outside are comets and shubunkins, your “common” goldfish can survive all year round through freezing temperatures and scorching summers. They are pretty tough, so long as they are kept in a pond deep enough to prevent temperature shock (over 3ft deep.)

While some fancy goldfish may be able to survive winter, it takes more of a toll on their health, as they are generally more delicate, but this isn’t to say it can’t be done at all.

It definitely can be under the right conditions, we just don’t recommend keeping fancy goldfish outside all year if you live in a climate where the winters are particularly harsh.

Which fancy goldfish types can be kept outside?

Some fancy goldfish fare much better outdoors than others due to their physique, others don’t do well at all because of their specific health requirements and vulnerabilities.

While they may not be able to survive harsh winters, they can definitely live outside for most of the year.

Here are some fancy breeds that do well in ponds during late spring, summer and early autumn:

These fish do better as while their bodies are altered, it is not extremely encroaching on their physical health like some of the others.

The Wakin and Jikin goldfish are probably the two best from this list as their body is most similar to a comet, these guys could probably survive over winter too.

Fancy goldfish breeds which are not a good choice to keep outdoors:

As you may notice, many of these options listed here have enlarged eyes and fatter bodies, this is because these features impede the gold fishes ability to swim and their ability to tolerate harsh environments.

Their digestion is also affected by their scrunched up bodies, so they need specialist diets sometimes, which can be difficult to apply in a pond, especially when things get cold outside.

Ponds often need strong filtration to run. The flow of these filters can push breeds like pearlscales around, as they are not strong swimmers at all.

The eyes of the many telescope or bubble eye goldfish breeds may get caught on rocks and surfaces and can rupture.

Ponds can also be subject to predation, and fancy goldfish stand much less of a chance at escaping predators.

What fancy goldfish do you have? Let us know in the comments!

Can fancy goldfish survive winter in a pond?

As previously discussed, we recommend taking fancy goldfish indoors over winter, as they don’t tend to fare that well in freezing cold weather.

They can become ill and nutritionally deficient in colder months as their metabolic rate slows.

If they aren’t used to this change, or if the process is not gradual, they can become shocked and die.

Fancy goldfish can be kept out in the warmer months however, during late spring, summer and early autumn, this is the best time to keep them outside if you live in a temperate climate.

Keeping fancies outside can provide a few benefits:

✅ Fish tend to live much longer, healthier lives out in a pond, due to the extra water volume and high amounts of oxygen, sunlight and food.

✅ Goldfish kept in ponds over the summer can put on massive growth in a short time, this is why in Singapore, where many fish are bred and shipped overseas to stores and wholesalers, the fish are kept in large ponds, to put on lots of growth quickly.

Fortunately in this part of east asia, the climate is hot and humid throughout the year, so they can keep fancy goldfish outside all the time (which may not be the case for you).

✅ The added sunlight and natural food in a pond will greatly improve the health of your fish, they will absorb more vitamin D as well as many other vitamins and minerals during their time outside.

✅ The large volume of water in a pond will also accelerate the growth of your fish, and it will stay cleaner for longer, reducing maintenance, especially useful if you have lots of fish!

✅ Ponds are great if you breed fancy goldfish during the summer, as the pond can be a great spawning ground and can support many more fish than a tank could, and you can keep baby goldfish out and grow them on before you sell them or rehome them.

If you are interested in breeding goldfish, check out our guide on it for further information.