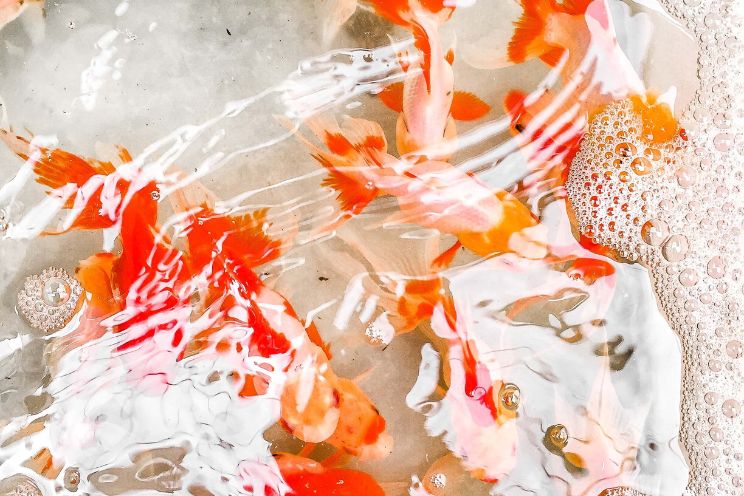 Ranchu goldfish are a variety of Fancy goldfish that are also sometimes called the “King of Goldfish.” These beautiful fish have become huge favourites with hobbyists worldwide, especially in Asia, where the fish originate.

Ranchus were originally bred to resemble a Sumo wrestler’s body shape with a large head and a heavy, chunky body. The Ranchu is said to represent everything that’s good about Japan and bring luck and harmony to a family home.

Read on to discover everything you need to know about what species make the best Ranchu goldfish tank mates.

Ranchus can grow to reach 5 to 6 inches in length. That means you need a pretty large tank to provide the fish with the space they need to be happy and include a few tank mates.

Unfortunately, many newbies to the fish-keeping hobby buy a tiny little fish from a pet shop, not realising that they’re purchasing a juvenile goldfish.

All goldfish varieties grow rapidly when provided with a suitable diet and optimal living conditions. That means your inch-long Ranchu will very quickly outgrow a small tank.

So, to be sure that your fish thrive, we recommend that you buy a 20 or 30-US gallon (17-25 UK) tank. Providing your fish with a large tank from the get-go will save you the hassle and expense of having to upsize to a bigger one in a few months’ time. Note that for every fish you add to your community, you must add a further 10 gallons.

Goldfish are big eaters that produce a lot of waste. A small aquarium quickly becomes unhealthy for the fish, and you really need a large tank with an efficient filter system to cope with the waste they produce.

What tank shape is best for Ranchu goldfish?

Ranchu goldfish are slow, clumsy swimmers, being hampered by their chubby shape and lack of a dorsal fin. For that reason, a long tank with lots of room for swimming is the best choice for them.

A deep tank is not suitable for Ranchus. The fish will struggle to get to the surface to feed and will quickly become stressed. Long-term stress is potentially fatal to fish since it compromises the animal’s immune system, leaving the fish open to attack by diseases and parasites.

Although Ranchu goldfish are not renowned as jumpers, choosing a tank with a well-fitting lid is sensible to prevent accidents during water changes and routine maintenance tasks. A lid or cover slide also keeps dust out of the water and prevents excess evaporation.

Goldfish bowls are not suitable for goldfish!

Most of us kept a goldfish in a bowl when we were kids. But these days, traditional goldfish bowls are not recommended for goldfish.

So, a goldfish bowl is much too small for a large goldfish to be happy. There’s neither enough swimming space for the fish nor sufficient surface area for gaseous exchange.

In addition, goldfish are gregarious creatures that need some company to be happy, and a bowl is simply too small for more than one fish.

Can Ranchu goldfish live in a garden pond?

Well, theoretically, Ranchus could live in a garden pond.

However, we would advise against that for the following reasons:

Of course, if you live in a warm area and you plan on keeping only Fancy goldfish in your pond, Ranchu goldfish could do quite well.

Are Ranchu goldfish aggressive towards other fish?

Goldfish are peaceful, sociable fish that love the company of their own species and other similar types of fish.

Although chasing sometimes occurs, that’s usually when the fish are juveniles or are new to the tank, and the behaviour usually settles down after a day or two.

Male goldfish can seem to display aggressive behaviour during spawning, typically chasing the female around the tank. If you see your fish becoming exhausted or the pursuit becomes too physical, it’s safest to remove the female and keep her in a quarantine tank so that she can recover.

Because Ranchu goldfish like warmer water conditions, you can keep some tropical species with them.

Some tropical fish species that can live with Ranchu goldfish include:

White Cloud Mountain minnows are attractive little shoaling fish that grow to around 2 inches in length.

Although there is a small risk that the minnows might be eaten by a large goldfish,  these little fish are usually fast enough to outrun the much slower Ranchus.

However, you should provide plenty of thick, lush plants and rockwork to provide the minnows with somewhere to hide when necessary.

Platies are around 3 inches long, so they are too big to be eaten by the goldfish.

Platies are brightly colored livebearers that need to live in groups of five individuals or more. These fish breed very readily in the home tank, so you will most likely end up with plenty more fish than you started with!

However, the Ranchu goldfish will eat most of the Platies’ eggs and fry, keeping the population under control.

Rosy barbs are attractive, peaceful shoaling fishes that reach around 6 inches in length, so ideally, you need a tank of at least 30 gallons if you want to keep them with your Ranchus.

Unlike other species of barbs, Rosies are peaceful fish that usually do well in a community setup.

River Murray Rainbowfish are strikingly attractive, colourful fish that thrive in cooler water of around 70° Fahrenheit.

In fact, these beautiful fish usually display their most vivid colours in cool water conditions.

Checkered/Chequered barbs are not seen often in the home tank, which is a pity, as these pretty schooling fish can do well with Ranchus and other Fancy goldfish.

These unusual fish can reach up to 2 inches long and do best in groups of at least eight fish.

Zebra danios are a perennial favourite in community tanks, needing water temperatures of between 65° to 77°F.

These fish must be kept in large shoals and make a beautiful addition to your setup, shimmering under the tank lights as they flit through your plants and tank decorations.

The Dojo loach is also commonly known as the Weather loach.

Weather loaches are nocturnal bottom dwellers who spend much time hiding until the lights go out. If you have moonlighting in your tank, you might see your loaches becoming agitated and super-active when they detect changes in barometric pressure and sense an approaching storm.

These fish need a large tank of at least 55 gallons and can climb. So, you need a setup with a tight-fitting lid to prevent escapes.

Unlike many loach species, Hillstream loaches are diurnal. However, these fish spend most of their time hiding beneath decorations and around plant bases, so you might not see much of them.

There are over 100 varieties of Corydoras catfish, and many can make suitable companions for Ranchu goldfish.

Cute corys live on the tank bottom, foraging through the substrate for tidbits and spending time resting motionless, apparently napping. These fascinating little fishes grow up to 3 inches, depending on the variety you choose.

Corys should be kept in groups of five or more.

Do you keep Ranchu goldfish with tropical goldfish? Tell us below!

Not everyone wants to keep tropical fish, so what’s the alternative?

Well, the best tank mates for Ranchus are other types of Fancy goldfish!

Large freshwater snails and species of shrimp can also do well as company for your Ranchus. Both these species can also work well as a cleanup crew, eating detritus, fish waste, and leftover food.

However, tiny shrimps should be avoided, as your Ranchus will probably make a meal of them!

As previously mentioned, Ranchu are susceptible to being buffeted and potentially injured by faster swimmers. In addition, the fleshy wen is vulnerable to damage.

Fast swimmers, such as Shubunkins and Comets, do not make good tank mates for the slow Ranchus. In addition, small shrimp, tiny fish that could be eaten, and fin nippers must also be avoided.

How many fish should Ranchu goldfish live with?

Since goldfish are highly social fish, you can keep as many Ranchus as you want, provided you have a large enough tank or pond.

However, don’t be tempted to overcrowd your fish!

Stress leaves the fish susceptible to attacks by parasites and bacterial diseases since the animal’s immune system is compromised. Feeding times are particular flashpoints, with the largest fish bullying the smaller, weaker fish and often leaving them short of food.

To prevent a feeding frenzy, offer food in two separate areas of your tank. That encourages the fish to split into two groups where bumping and barging are less likely.

I hope you enjoyed our guide to the best Ranchu goldfish tank mates. If you did, please take a moment to share it!

Ranchus are sociable, peaceful fish that do best when kept in groups with other Fancy goldfish or with some of the tropical fish species that prefer cooler water temperatures. Avoid very small fish and shrimp that might be considered to be food sources by the Ranchus.

Slim-bodied, fast-swimming fishes are not recommended as tank mates for Ranchus. These speedsters will almost certainly outcompete the Orandas at feeding times, and accidents are almost inevitable.

What tank mates do you keep with your Ranchu goldfish? Tell us in the comments box below.