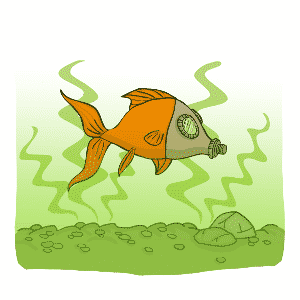 Water is water, right? Goldfish live in mucky, scummy ponds and don’t seem to have a problem all of their lives. Does that mean you just forget about your goldfish tank water parameters and hope things will be fine?

No, you definitely can’t!

The quality of water is as important to goldfish as the air we breathe is to us. If your fish’s water is poisonous, their health will seriously suffer.

You might know what it feels like to breathe car exhaust or other noxious fumes. It makes you feel ill and can lead to long-term health problems.

It’s the same for goldfish. But they have no escape, as they are captive in their tank.

Over time, poor water quality puts stress on your fish’s immune system, leading to serious health problems and even death.

To help you avoid this, we’re going to take a close look at goldfish water parameters. Including:

There are lots of opinions surrounding exactly what is the best kind of environment to keep our goldfish friends in.

While there will be some variation in advice depending on who you talk to, one thing is certain: clean water is far better for goldfish than dirty water.

In fact, clean water is necessary to maintain your fish’s health and will not hurt them. The only possible exception to this is moving a fish from dirty water to clean water too suddenly. You should always change your goldfish water parameters gradually, so that your fish can acclimatise to their new surroundings.

While ponds or lakes may seem dirty, the truth is that algae and mud don’t cause any problems for goldfish. While pollution from rotting debris is diluted by the large water volume and made less harmful by helpful “good bacteria” present in wild eco-systems.

However, in the home aquarium, water and space is much limited. This means things become foul very quickly if the water is not changed.

How do you know when things are going wrong? The best way is to use a test kit to monitor your goldfish water parameters.

You should also look out for an concerning changes in your goldfish’s behavior, such as rubbing up against tank decorations.

The best way to keep good quality, stable water is to make sure that you have as much water volume as possible for your fish.

This means that you will have to avoid irresponsible overcrowding and give each fish the space it needs. It is much harder to keep water clean when you have an overstocked tank.

Secondly, you will want to do lots of water changes and keep every aspect of the tank as clean as you can. This includes:

Beware of giving out too much food, as this can lead to excess waste in the tank. This food then rots and can badly hurt your water quality.

Many people struggle with keeping their water in check without realizing that they are contributing to the problem more than the fish!

There are 4 main water parameters that you should consider:

KH and GH are also helpful, so you might want to monitor these if you have tests for them in your kit. However, the four parameters above should be your top priorities!

This is probably the most important parameter to be aware of. Why? Because ammonia poisoning is the #1 killer of aquarium fish.

Ammonia is a highly toxic substance produced from your fish’s waste. It is not the waste itself, but a byproduct of the waste breaking down.

The only acceptable level of ammonia is 0ppm (parts per million). In other words, none!

(That’s assuming there are already fish in the tank. If the tank is still in the process of cycling than you will need to have ammonia to keep the process going.)

Fish-keepers will often struggle with ammonia problems because their tanks are overcrowded or because they are feeding too much.

Nitrite is the product of ammonia being broken down by “good bacteria”.

While nitrite is a step in the right direction – it’s less harmful to your fish than ammonia – it is still very dangerous and is known to cause “brown blood disease” or nitrite poisoning.

Like ammonia, you do not want to have any nitrite readings in a “cycled” tank.

Nitrite surges will only come after ammonia surges. So if you have an ammonia spike and don’t do anything about it, be prepare for more troubles to come.

When good bacteria has broken nitrite down, it becomes nitrate. Nitrate is a far less toxic substance than ammonia or nitrite.

When nitrate readings begin to show up on a cycling tank, that is typically an indication that the cycle has completed and the tank is ready to receive fish.

For goldfish, it is not recommended to have more than 40ppm of nitrate in their tank.

Signs of high nitrates can manifest as green water and algae blooms. The best way to lower nitrates is to change the water. For the average aquarium where water changes are done regularly enough, most people will never have issues with it.

pH, or “potential of hydrogen”, is a way to measure how alkaline or acidic something is. You may remember from science class that pH is measured on a scale of 0 to 14, with 0 being the most acidic. A pH of 7 is considered neutral.

When the pH falls lower than 6.5, the nitrogen cycle begins to experience difficulties.

Controlling the pH of water that comes out of the tap soft can be done using commercially available buffers.

This stands for Carbonate Hardness. A lower KH is a warning sign that the pH may be likely to get out of control at any given moment.

There is not a strict ideal for KH, though readings above 200 might indicate that your pH is on the higher end of the scale.

GH is an abbreviation of General Hardness, which is the measurement by which one can determine how hard or soft the water is.

All of these water parameters can be easily measured and tracked through the use of simple testing kits.

There are two main kinds of test kits available: liquid and strip tests. Using a strip test is the fastest method, however many keepers advise liquid tests because they are claimed to be slightly more accurate. Both will get the job done and the main thing is to have something on hand if there is ever a crisis.

Regardless of what kind you choose, it is always important to analyze the results in an area with good lighting. If you don’t have a particularly good eye for color matching, try asking someone else their opinion.

While water testing is often available for free at local pet stores, it is still recommended to have a kit on hand at all times.

Goldfish owners should buy a test kit that measures ammonia and one that measures nitrite and nitrate. Then test your water before each weekly water change.

And whenever you suspect a problem, be sure to test the water right away! It could save your goldfish’s life