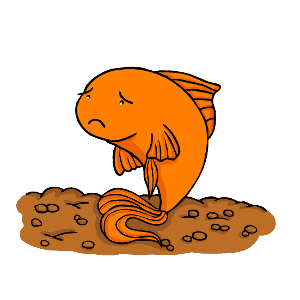 Is overstocking bad for goldfish?

If you love fish as much as we do, you know what it’s like to always want more. Even though you know an overcrowded fish tank is a bad thing – you find yourself at the local pet store buying another fish.

Whether that’s another goldfish or a fish that can live with goldfish, suddenly your tank is dangerously overstocked.

But what’s so bad about having too many fish? Is it really the end of the world if your little fishy family has to make room for another member?

We hate to be the bearers of bad news, but the truth is that an overcrowded fish tank is a very dangerous place for your goldfish to live. It’s one of the main reasons why pet goldfish die.

Why overcrowding your fish tank is bad for your fish

Fighting with other fish

Would you find it easy to get along with others if you were forced to live together in a small cramped room? Chances are you would begin feeling a bit irritable rather quickly.

While goldfish may be aggressive for other reasons, many times it’s only a natural reaction to feeling cramped. Having a group that gets along under such conditions is an unrealistic expectation.

A very common problem with an overcrowded tank is aggression. It becomes a cruel game of survival by eliminating the competition.

As you probably know, goldfish produce large amounts of a toxin called ammonia, which quickly builds up in the water.

The more fish you have, the faster that the ammonia builds up. So it doesn’t take long before there is not enough water volume to dilute the ammonia. The ammonia poisons your fish and they start to get ill and die.

To prevent the system from crashing, you would need to invest in costly filtration units and change the water constantly. This just isn’t practical for most people.

Goldfish are not meant to live packed into a small space like a bunch of sardines. In nature, they live in spacious ponds with thousands of gallons to themselves. They do best with ample room and good, clean water.

In time of weakness, remember that it is better to have one healthy fish than a dozen sick fish if you can’t get a bigger tank. You will certainly enjoy the fish-keeping hobby more if you have healthy fish.

What to do if your fish tank is overcrowded

If your goldfish tank is overstocked, you have two options:

Both of those options will take time, so it’s important that you do the right things while looking for a new owner or a bigger tank.

Here’s what to do: