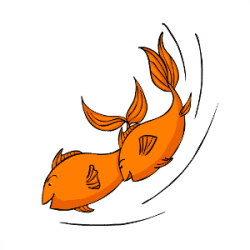 Goldfish are generally thought of as being fairly simple creatures, and the different behaviors that they exhibit are not difficult to interpret, if you know what you are looking for. Read on to learn about how to decode some of the most common pet goldfish behaviors.

Understand how your goldfish behaves

Goldfish are fairly social fish, and are also credited with the ability to learn by association. Unless they are in competition with each other for food, even goldfish of different sizes and ages will rarely behave aggressively towards each other, and will come to recognize the other fish in their tank over time.

Goldfish also become used to the presence of the people that feed them and that they see every day. They will soon learn when feeding time is and that, if someone approaches, they might soon be fed! Goldfish will often come to the top of the tank when someone approaches or follow the progress of a hand moving on the other side of the glass.

Goldfish love to dig about in the substrate of the tank! This is normal goldfish behavior and one that you will be able to observe quite often. There are elements of both foraging for food scraps and making their mark on their environment involved with this activity, and as grazing fish, goldfish do like to constantly have something to nibble on!

Goldfish will also often eat the plants within their tank, and this behavior can be viewed in the same way as any other grazing animal, such as a horse or a cow, whose metabolism is constantly in motion.

Goldfish are not always among the fastest moving fish, but occasionally they will show quite a turn of speed! If your goldfish are chasing each other around the tank, this is sometimes the lead up to mating and generally not cause for concern.

However, if your tank is overcrowded or your fish are in competition over food, your goldfish may become stressed and chase each other off in competition for resources.

Hovering at the tank’s surface

Goldfish tend to use the full depth of their tanks from top to bottom, unlike some species that generally show a marked preference for a certain area of the tank. However, goldfish will congregate near to the top of the tank if they are expecting food or if the oxygen levels in the tank are low.