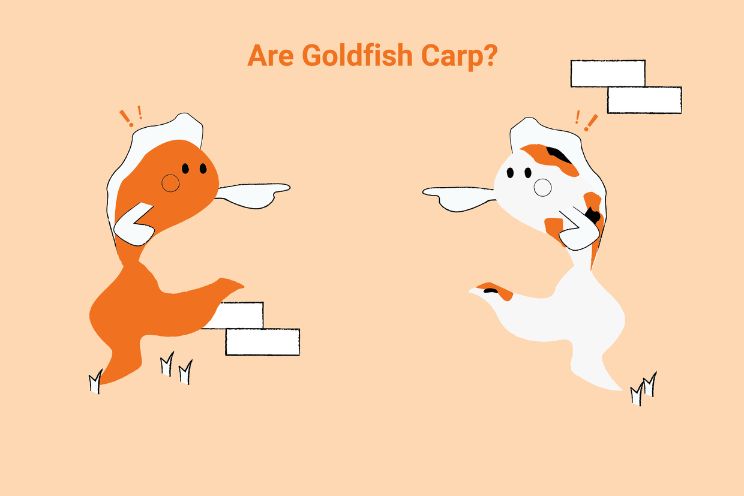 Have you ever wondered whether goldfish and koi are the same type of fish? And whether they could breed with each other?

Do you struggle to tell koi and goldfish apart?

While they are related, the two types of fish are actually different species, with many differences between them.

Read on to learn more about these differences. We’ll start by looking at the different origins of the two types of fish, then look at their physical differences. Finally, we’ll find out whether koi and goldfish can breed with each other.

The origins of the koi carp

Ornamental carp have been kept in Japan for centuries. However, koi carp were first bred in Japan during the 1820s.

Unlike the common carp, koi have been selectively bred to have vibrant colors and patterns.

If they were left alone in the wild, koi would breed with common carp. In just a few generations, their offspring would revert to the standard common carp colors and appearance.

The origins of the goldfish

The goldfish was developed in China over a thousand years ago. Like koi, they were selectively bred to develop attractive colors and patterns.

By the reign of the Song Dynasty (960-1279AD), several goldfish colour variations had been successfully produced. Examples available at the time included orange, white, yellow, and red/white mixes.

Goldfish were introduced to Japan in the 16th century and spread to Europe in the 17th century.

Goldfish and Koi are part of the same family

The order cyprinidae is the largest order of vertebrates known. Iit contains some 3,000+ species of fish found all over the world in freshwater habitats. Most of these species are now sadly extinct, but many still live among us today.

The order can be separated into family groupings of fish, this is to make it easier to identify what lineage of fish a specific species is. Cypriniformes include:

As well as a couple more select fishes, and many more extinct species and lineages.

Goldfish and Koi are both members of the Carp and Minnow family; this is where they split off from each other.

The separation has occurred relatively recently in geological time (anywhere from 2 – 20 million years ago.)

This is why Koi and Goldfish look so similar, because they share a relatively recent common ancestor.

They do however, belong to different genuses:

They then separate into their species names, and you would address each fish by first saying the genus, then the species, to be as specific as possible.

Here is an example of the Taxonomic Pyramid that may help you to better understand how this is categorised:

Can Goldfish and Koi live together?

Yes, both goldfish and koi can live together, but there are some limitations.

Koi are large and powerful fish, so are fierce competition whenever it comes to physical abilities. During feeding, Koi will outcompete most goldfish.

You can read more about keeping koi and goldfish in the same pond in our dedicated blog.

The differences between koi and goldfish

As goldfish and koi are both a type of carp, some people find it difficult to tell the difference between them. However, it’s not difficult once you know what you’re looking for.

The main differences between the two types of fish are:

Finally, though goldfish and koi can breed with each other, the resulting offspring are always sterile. This means it is not possible to breed multiple generations of koi-goldfish hybrids.