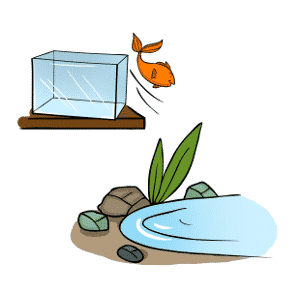 Moving your goldfish from a tank to a pond is entirely possible, and will allow your goldfish to live a more natural lifestyle with more space, which may help them to live longer. However, working out if your pond is suitable for goldfish and making the move successfully can be a tricky business, and ensuring that you go about things in the right way is vital.

In this article, we will share some tips on how to move a goldfish from a tank to a pond successfully.

Is the pond suitable for goldfish?

First things first, you should ensure that the pond that you want to move your fish into is suitable for goldfish. If there are already goldfish in the pond, this might seem like an obvious indication, but it is also worth ensuring that the pond is not already so heavily populated that your fish will just add to the overcrowding!

Ponds containing koi carp may also be suitable for goldfish, but it is important to remember that the care requirements of koi are rather different to that of goldfish, so ensure that both species can be properly cared for in the same pond.

Also bear in mind that if your goldfish is small and the koi are very large, the koi may bully or even try to eat your goldfish!

A pond that is suitable for goldfish should have a large surface area, have some shallow areas or be reasonably shallow, have plenty of aeration, and have good water parameters. It should be of a suitable depth to ensure that the water does not freeze all the way through during the winter, but not so deep as to be stagnant or still in the lower depths of the water.

What time of year to move fish

Moving goldfish from a tank to a pond should be planned carefully to ensure the minimum amount of upset to the fish, and to make the move as seamless as possible. The best way to do this is to arrange to move your fish during the summer when the weather is warmer, when you are most likely to be able to match the temperature of the pond to the tank before you release your fish.

However, goldfish often mate and reproduce in the summer months too, and so you should make sure that your fish is not carrying eggs or in the middle of preparing to mate when you move them.

Before you move your fish, it is important to spend some time bringing the water parameters of the pond and the tank as close to each other as possible. This means investing in a test kit that measures ammonia, nitrite and nitrate, then regularly testing both bodies of water, adjusting the water chemistry as needed.

This can take some time to achieve, so don’t rush the process!

On the day that you move your fish, the water temperature and water quality parameters within their tank should be as close to that of the pond as possible. This may mean waiting a while for the right day, when the temperature of the pond is just right!

When you are happy that the pond and tank match each other well then it’s time to make the move.

Moving your goldfish from a tank to a pond involves following a similar process to that used to move a fish from one tank to another. It’s also similar to the process of introducing a newly bought fish into a tank.

However, the process will take longer when going from a tank to a pond, assuming that you do everything properly.

Ideally, you should pick a shallow section of the pond to release your goldfish into. If possible, section this off so that your goldfish remains within this small area for observation for a while after their release.

Begin by adding a little pond water to the bag. Allow your goldfish to adjust, and gradually add a little more pond water every half hour. Continue this process until the parameters of the pond water are a near match for the water in the bag.

You can then open one end of the bag and release your goldfish into the pond. Ideally, you should try to avoid transferring water from the bag into the pond.

Finally, dispose of the water in the bag and keep an eye on your fish for a couple of hours after release. Once you are sure that everything is ok and your goldfish has made the transition successfully, you can remove the barricade and release them into the main body of the pond with the other fish.