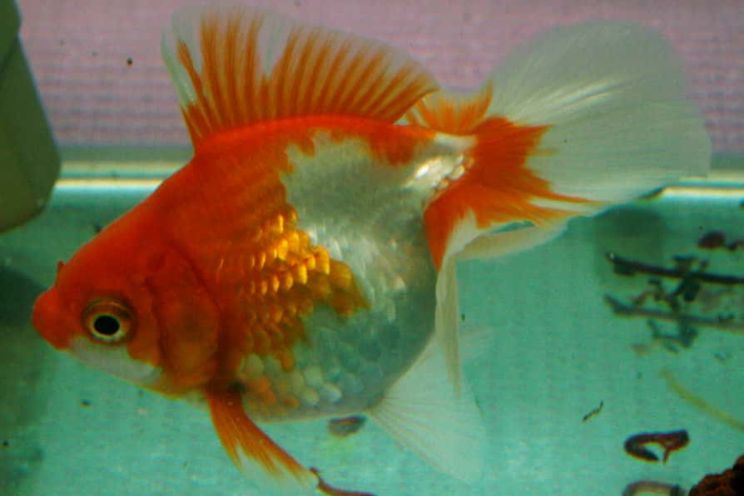 Tosakins are rare fish that you seldom see in the home tank. If you manage to find one of these beauties for sale online, you can expect to pay around $60/£50 for a standard red-and-white example.

Read this comprehensive guide to find out what fish make the best Tosakin goldfish tank mates.

Tosakins are a rare, seldom-seen variety of goldfish that will generally reach up to 7 inches long when fully grown.

For that reason, you’ll need a large aquarium to keep a small group of Tosakin Fancy goldfish and a few tank mates.

As you seldom see Tosakins in fish stores, it’s most likely that you’ll be buying your goldfish online unseen. Generally, the goldfish you buy are only a few months old.

Juvenile goldfish are tiny, only measuring around an inch or so long. But those tiddlers will grow extremely quickly, doubling in size in a matter of weeks!

So, unless you intend to upsize your fish tank in the future, we recommend that you start with a 20 to 30-gallon tank. Note that for any additional fish you add to your community, you’ll need to factor in another 10 gallons per fish.

Although you might think that goldfish will do fine in a small aquarium, these are very dirty fish that make a terrible mess in their home.

Goldfish don’t have stomachs. Whatever the fish eats passes through its intestines, where any available nutrients are extracted. The remaining waste products are passed out directly into the tank.

All goldfish are greedy fish, spending most of the day foraging around the tank for scraps of food and grazing on algae. So, you can imagine how much mess the fish make.

If you keep goldfish in a small aquarium, the water quality quickly deteriorates, which is harmful to the fish. To keep the fish healthy and thriving, you need a large tank with an efficient, powerful filtration system.

That also makes life easier for you from a maintenance and cleaning point of view since you won’t need to spend as long on water changes.

What tank shape is best for Tosakin goldfish?

Like all Fancy goldfish, Tosakins are slow swimmers, not helped by their beautiful curly tails. Goldfish like to feed at the water’s surface, and a deep tank makes that difficult for these clumsy swimmers.

Bottom line: Do not keep your goldfish in a small tank!

Does a goldfish tank need a lid?

Mature Fancy goldfish don’t usually jump. However, juvenile fish can be skittish, so to avoid accidents, we recommend that you choose a tank with a lid or cover slide.

A lid also helps to keep dust and foreign bodies out of the tank and can prevent evaporation, too.

Although many people kept one solitary goldfish in a bowl as kids, these traditional containers are now regarded as totally unsuitable for goldfish.

Well, a goldfish bowl is much too small for a 6 or 7-inch goldfish to swim in. In addition, the surface area is too small for good gaseous exchange, potentially causing an oxygen shortage in the fish’s habitat.

Can Tosakin goldfish live in a garden pond?

In theory, Tosakins could live in a large garden pond.

However, there are a few negatives to keeping any variety of Fancy goldfish in an outdoor pond:

In addition, Tosakin goldfish are rare and beautiful creatures that are best enjoyed when displayed in a large aquarium. And, given the high price of these fish, it would be a shame if you couldn’t enjoy their beauty because they are hidden by aquatic plants in a pond!

Are Tosakin goldfish aggressive toward other fish?

Tosakin goldfish are not aggressive. All goldfish varieties enjoy spending time around other goldfish and similar fish species, such as Koi and Orfe.

If you see your Tosakins chasing each other, that’s only juvenile behaviour that you typically see in new setups. When the fish have had time to acclimate to their new home and have become used to each other, they usually stop pursuing each other.

Sometimes, male goldfish can become a tad overenthusiastic during spawning, chasing a female fish around the tank and attempting to push against her to trigger egg-laying. That kind of behaviour is highly stressful for the female fish and often results in minor injuries.

In cases of spawning bullying, it can be a good idea to remove the female from the tank until the male calms down.

Tosakin goldfish typically get along very well with many other fish species, including a few of the more temperate tropical species.

Of course, goldfish are coldwater fish that prefer water temperatures of 65o and 72o Fahrenheit. Fancy goldfish, such as Tosakins, like the water to be at the upper end of that temperature range.

But did you know that some tropical species can survive in temperate water of around 70° Fahrenheit? That means you can keep quite a few tropical fish species with Tosakins, provided the temperature in your tank room doesn’t fall too low.

Here are a few tropical fish species that can live in temperate water, which could potentially make good tank mates for your goldfish.

Zebra Danios are much-loved community fish that are seen in many home fish tanks.

Danios can tolerate cooler water temperatures of between 65° and 77° Fahrenheit. These lively little fish need to be kept in large schools for the best visual effect and to give the fish the security they need to thrive.

River Murray Rainbowfish are striking fish that display their most beautiful colours in cooler water conditions or around 70° Fahrenheit.

Rosy barbs are peaceful community fish that can live peacefully with goldfish.

These are quite large fish, growing to reach around 6 inches in length, so you need a sizable tank to accommodate them. If you want to include Rosy barbs in your community tank with Fancy goldfish, we recommend a tank of at least 30 gallons.

Checkered barbs are an unusual species of barb that are not often seen in home fish tanks.

These peaceful, pretty fish are ideal for a Tosakin community tank, only growing to reach 2 inches long. Note that Chequered Barbs must live in shoals of at least eight individuals to feel secure and thrive.

Platy fish can bring a splash of bright colour to your community tank. These fish are livebearers that get to around 3 inches long and come in a range of vibrant colours and pretty patterns.

Platies breed readily, so you’ll never be short of fish. However, your goldfish will enjoy feeding on the fish fry, helping to keep numbers under control.

The White Cloud Mountain Minnow is a small shoaling fish that makes a nice addition to a coldwater community fish tank.

These speedy swimmers must live in large schools and need plenty of driftwood, rocks, and dense planting where these nervous fish can hide when they feel the need to.

There are over 100 varieties of Corydoras Catfish!

Corys are extremely popular in the hobby, being easy to care for, hardy, peaceful, and incredibly cute! These bottom-dwelling fish grow to around 3 inches long and need to live in small groups of at least five individuals.

Dojo loaches are a fascinating species of nocturnal bottom-dweller. These fish are also known as Weather loaches, thanks to their habit of reacting to fluctuations in barometric pressure. The fish dart frenziedly around the tank when they sense a storm coming.

If you want to keep Weather loaches, you’ll need an aquarium with a tightly fitting lid, as these strange fish are escape artists! Ideally, you need a fish tank of at least 55 gallons to keep Dojo loaches.

Unlike the Dojo loach, Hillstream loaches are diurnal, so you’ll get to see them foraging around plant bases and underneath pieces of driftwood on the substrate.

These loaches like cool water between 68° and 75°F, making these shy creatures a good choice of tank mates for Tosakin goldfish.

Do you keep Tosakin goldfish and tropicals?

If you don’t want to run a heater in your fish tank, you might prefer to swerve the tropical fish option and stick to keeping Fancy goldfish.

There are plenty of gorgeous Fancies to choose from, all of which make peaceful tank mates for your Tosakins.

In fact, any of the following Fancy goldfish make suitable tank mates for Tosakins:

Large freshwater shrimp and snails can also be a good choice of goldfish tank mates. Both shrimp and snails eat algae, leftover food, and even fish waste, helping to keep your aquarium clean and tidy and easing the bioload on your filter media.

That said, Tosakins and other goldfish will happily make a meal of shrimp that are small enough to be eaten. So, be sure to choose large shrimp varieties that won’t fit into a goldfish’s mouth!

As we mentioned earlier, large, fast-swimming goldfish, such as Comets and Shubunkins, can stress the slower Tosakins, especially at feeding times by pushing and barging them out of the way. You should also avoid tiny inverts and fish that could be viewed as lunch. Fin nippers are also best avoided, as they might be tempted to attack the Tosakins luxuriant tail.

How many fish should Tosakin goldfish live with?

Tosakins thrive in large groups of other similar types. So, you could theoretically keep as many other goldfish as you want to with your Tosakins, provided your tank is large enough to accommodate them all.

Be sure not to overcrowd your fish. Overcrowding leads to stress, disease, and a failure to thrive. In addition, overcrowded tanks are a stressful place for the fish to be, especially at feeding times when the fish can be buffeted and bumped in the feeding frenzy that often occurs.

Of course, a feeding frenzy can happen in a tank that’s not overcrowded. You can prevent that by feeding your fish at different parts of the tank.

You’ll find that the fish split into two groups, with the smaller, weaker ones in one group and the larger, more belligerent types in the other. That way, each fish gets plenty to eat, and none are injured in the melee.

I hope you enjoyed our guide to the best Tosakin goldfish tank mates. If you did, please share the article with other Fancy goldfish enthusiasts!

Tosakin goldfish are rare and beautiful fish that thrive when kept in a community tank with other varieties of Fancy goldfish. There are a few tropical fish species that can work well with Tosakins, but you should avoid including large, fast-swimming goldfish that could bump into and injure the slower Tosakins.

Very small shrimp and fish are also best avoided, as the goldfish will eat them given a chance.

Do you keep Tosakin goldfish? What other fish do you keep in your community tank? Tell us in the comments box below.