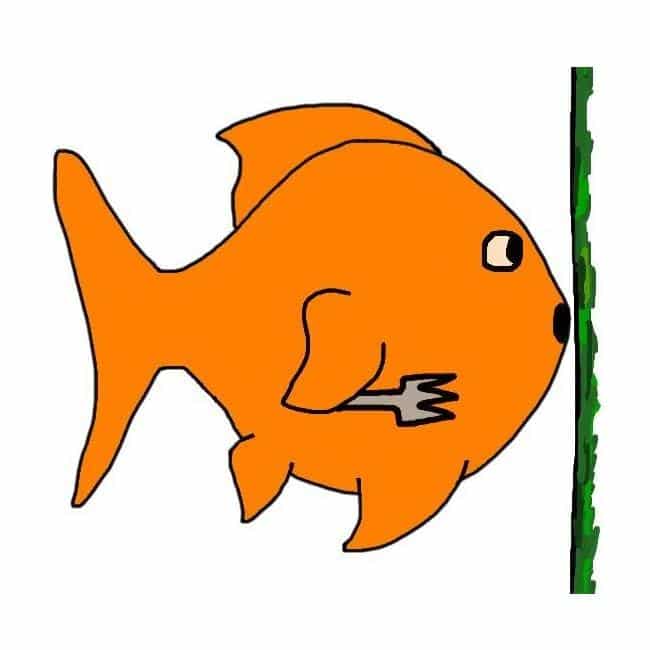 Goldfish are omnivores (they will eat both plants and animals) and they will eat – or at least try to eat – almost anything. Also, because goldfish have no stomachs, they are constantly on the lookout for food.

This means that goldfish will eat algae wherever they find it – off the sides of your tank, off decorations and plants, and off the gravel on the bottom of your tank.

If goldfish eat algae, does that mean I don’t have to clean my tank?

Before you get too excited about never having to clean your tank, you have to remember that algae can grow very quickly (particularly in tanks with a lot of light). Even though goldfish eat algae – and will eat a lot – you can’t expect them to keep every bit of your tank clean! If you want to keep your tank looking neat and tidy, you will probably have to clean away some algae yourself.

It’s best to leave some algae in your tank though, as it can help keep down levels of chemicals such as ammonia, nitrite and nitrate.

Is eating algae good or bad for my goldfish?

Neither. Algae isn’t particularly nutritious, but it’s not bad for your goldfish either. Don’t let algae growth get out of control so that your fish are eating it all the time – and still feed your goldfish properly – and you should be alright.

Could I get other fish to help eat the algae in my goldfish tank?

It is possible, but it comes with some risk. Fish such as Plecos can latch on to goldfish and damage their scales and slime coating!

If you would still like to try some other fish in your goldfish tank, check out our ultimate guide to fish that can live with goldfish.

Otherwise, the combination of making sure your tank isn’t too brightly lit, regular cleaning, and your goldfish eating some algae themselves, should be enough to keep algae growth under control. Some plants, such as hornwort, can also inhibit the growth of algae.